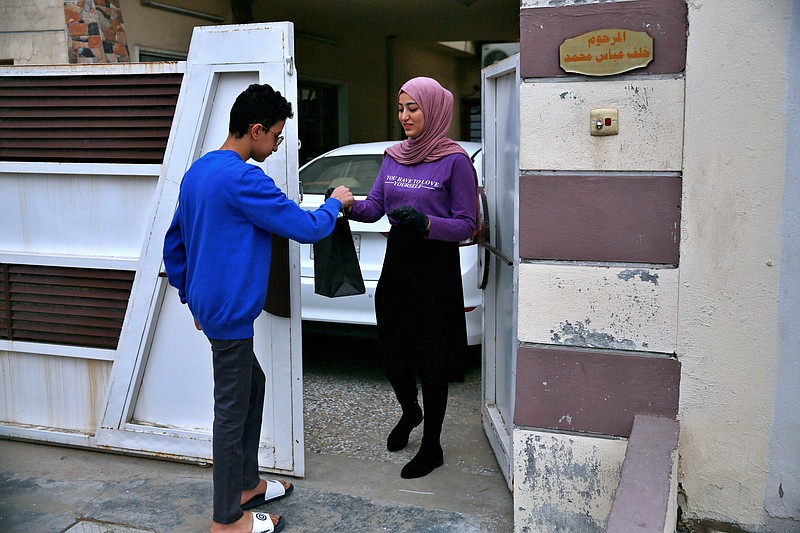 Shafaq News/ Fatima Ali was in her final year studying to become a medical analysis specialist when Iraq imposed a full lockdown in March. Forced by a raging pandemic to stay home, she spent her days on social media, looking for something to do with her time.

Then an idea came to her: Six years ago, visiting America on a young leaders exchange program, she and other students toured a Vermont cheese factory where aged cheese platters were displayed on wooden boards so inviting they looked like paintings

"I liked it ... I said to myself, why not be the first to do it in Baghdad?" She took a free online business course, and researched cheeses and wooden plates available in the Iraqi capital.

A growing number of Iraqi women are using pandemic restrictions to establish home-based businesses. It's a way to bypass discrimination and harassment that often come with working in Iraq's male-dominated, conservative society -- and bring in extra income as the economy worsens.

On a recent day in her kitchen, Ali cut up and arranged cheeses, dried fruit and nuts as she talked about her further dreams. She wants to go to culinary school abroad and one day open a school in Iraq for those "who have passion for cooking, like me."

"This is just the beginning. I'm still developing myself," she said. The slogan on her purple t-shirt declared, "You Have to Love Yourself."

Rawan Al-Zubaidi, a business partner at an Iraqi nonprofit organization that supports startups and young entrepreneurs, said there's been a noticeable increase in home-based businesses since the pandemic's start, including women making food deliveries, sweets, accessories, crocheting and embroidering.

"It represents a solution to obstacles that Iraqi women face when trying to find a job," she said, citing women whose husbands or fathers won't let them work, unsupportive male colleagues, discrimination and lack of career growth opportunities.

"Some Iraqi women can't find a job because conservative families or husbands consider that women talking directly with other men on the job will bring shame on them," Rawan said.

Women's labor force participation in Iraq is particularly low. As of 2018, only 12.3% of women of working age were employed or looking for work, according to the United Nations.

Tamara Amir, who manages a Facebook page to educate Iraqi women about their rights, said she receives dozens of calls each day from women facing sexual harassment at work. Often, they report feeling they have to give their male boss "something in return" to get a job or advancement.

Ali's parents have been supportive of her home-based business, which she says is more secure and means she does not have to go outside and mix with people. Her mother helps her prepare her products, and Ali teamed up with a popular delivery app.

At first, she received two orders a week maximum. Now she can barely keep up with the multiple orders she gets every day.

Mariam Khzarjian, a 31-year-old Iraqi-Armenian, worked as an executive assistant in an engineering company for seven years. She quit in late 2018, feeling her career was going nowhere and started her own home business selling handmade accessories inspired by her ancestors, who used to work as carpenters.

She called her business Khzar -- Armenian for the art of cutting metals and woods -- with the slogan "wear a story," since Khzar designs are based on telling stories and building emotional communication with the clients.

She got off to a slow start. Distractions got in the way. But the pandemic forced her to focus, working on new designs and techniques during curfews. The move toward online shopping helped her business take off in a way she could not have imagined.

"Online became the only way to reach clients, and they in turn became more loyal and more confident about my art, because they are buying something without trying it," Khzarjian said.

"Corona is terrible, but for those able to take advantage of the internet and build connections with customers, it had its positive side," she said.

Sara al-Nedawi, 23, studied business administration and has tried to find a job for months.

"One day I sent my CV to a company, and they texted me to ask if I was pretty and whether I wear the hijab or not," she said, referring to the headscarf worn by some Muslim women. Someone from another company she applied to called her to get more information, then told her she has a lovely voice and asked for a photo.

Now she is trying to start a home-based food-catering business but lacks the capital.

"I need to work first to collect enough money," she said.

Samarra still struggles to reclaim its historical place in Iraq

American Energy Interests in Iraq Are Under Direct Attack by Iran

Iraq seeks to reinvent itself as regional convener for internal stability

Biden under pressure to respond to escalating attacks on U.S. troops in Iraq and Syria