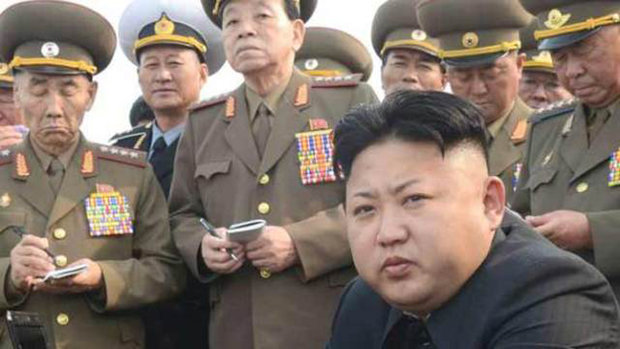 Shafaq News/ North Korean leader Kim Jong-un made a defiant speech at a military parade on Monday night, vowing to ramp up the country's nuclear arsenal.

In March, North Korea tested its largest-known ICBM for the first time since 2017.

This sparked wide condemnation from the international community.

The US also imposed several sanctions on the country after the test. ICBMs, designed for nuclear arms delivery, extend North Korea's strike range as far as the US mainland.

However, Mr Kim has been undeterred by the condemnation so far.

"We will continue to take steps to strengthen and develop our nation's nuclear capabilities at the fastest pace," he said, adding that their nuclear forces "must be ready" to be exercised anytime, according to a report by the official Korean Central News Agency (KCNA).

North Korea's nuclear weapons were fundamentally a deterrence tool against war but could be used for other means, he said, echoing previous rhetoric that the country would strike back if attacked.

Parade pictures released by state media show that the Hwasong-17 was among the weapons displayed at the parade. North Korea claimed to have test fired the massive ICBM for the first time in March.

South Korean experts have questioned the success of the test launch.

Typically, Pyongyang showcases its new weapons at its military parades which often feature long processions of tanks, artillery and soldiers.

Monday's military parade was closely watched as North Korea has tested several missiles this year, heightening tensions on the peninsula.

In 2018 Kim Jong-un put in place a moratorium on long-range ballistic missile and nuclear tests, following talks with then US President Donald Trump.

But in 2020, Mr Kim announced he was no longer bound by this promise.

In addition to a spate of missile tests earlier this year, satellite images have showed North Korea firing up activity at its nuclear testing facility in Punggye-ri in March, stoking fears the country would resume testing nuclear weapons and long-range missiles.