China's birthrate just hit another record low. But the worst is yet to come 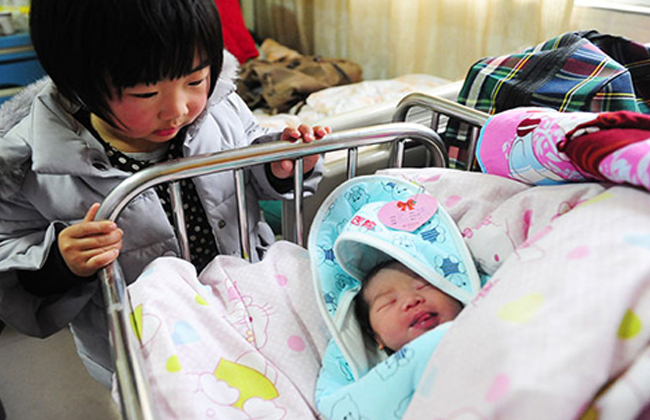 Shafaq News/ China's birthrate in 2020 has hit another record low -- and there's no indication things are about to pick up anytime soon.

There were only 8.5 births per 1,000 people in China last year, according to the latest yearbook released by the country's National Bureau of Statistics in late November.

That's the lowest not only since yearbook records began in 1978 -- but also since the founding of Communist China in 1949, according to official data.

The birthrate, which has now fallen to single digits, is the latest troubling sign of China's worsening population crisis, as the country of 1.4 billion people begins to lose its youthful edge.

The country's once-a-decade national census revealed in May that just 12 million babies were born last year -- an 18% plunge from 14.65 million in 2019.

Demographers have long predicted China will begin to experience a population decline into the decades ahead, however, some experts now worry it may come much sooner than expected.

"From our preliminary forecast based on provisional data, (in 2021) it's going to be very likely to be around or even under 10 million births," said James Liang, a research professor of economics at Peking University in Beijing.

"And of course, with that number, the biggest news will be China is probably in a population decline."

Liang is not the only expert with that concern. He Yafu, an independent demographer in Guangzhou, wrote on social media last month that "China's population is very likely to enter negative growth in 2021."

In May, following the results of the national census, He predicted China's population would start shrinking in 2022. "But now, I think my forecast from half year ago was too optimistic," he wrote.

Based on the most recent data published by local governments in China, He predicts the number of newborn babies to be between 9.5 million and 10.5 million this year. Given there has been an average of about 10 million deaths annually in recent years, "if the number of newborns is near the lower limit of the prediction, that means the population is bound to register negative growth," He wrote.

Dwindling birthrate is a problem faced by many countries, but in China, the decline has been particularly steep due to its decades-long one-child policy.

To arrest the falling birthrate, the Chinese government announced in 2015 that it would allow married couples to have two children. But after a brief uptick in 2016, the national birthrate has been falling year on year, prompting authorities to loosen the policy this year even further to three children -- though few experts believe the three-child policy will be a game changer.

And compared with other industrialized nations with similar fertility rates, China -- despite economic growth -- still trails far behind in per capita GDP and has a relatively weak social welfare system.

China's fertility rate stood at just 1.3 last year -- among the lowest in the world and even lower than 1.34 in Japan. But China's GDP per capita is only one fourth of Japan's. The few other countries with a lower fertility rate include Singapore (1.1) and South Korea (0.84).

“Of course, the bad news to China is this is not the end, and that China will continue to gravitate toward the lowest of the spectrum -- so it'll be more like Singapore and South Korea very soon," Liang said.

"If you look at big cities in China, like Shanghai and Beijing, their fertility rate is already the lowest in the world -- at about 0.7."

"(But) the biggest worry is China will lose its scale advantage, being the biggest market for almost everything. It has a very efficient supply chain because of its scale. And the innovation capacity may not be as vibrant when you have only half the young people today."

An aging society also puts tremendous pressure on the country's younger generation, which is already increasingly postponing marriage -- or even eschewing it entirely. Last year, marriage registrations declined for the seventh consecutive year to 8.1 million, a crushing 40% drop from a peak in 2013, according to the National Bureau of Statistics yearbook.

For decades, local governments have forced millions of women to abort pregnancies deemed illegal by the state under the one-child policy. Now, they are churning out a flurry of propaganda slogans and policies to encourage couples to have more children. The common incentives include cash handouts, real estate subsidies and extension of maternity leave.

This year, more than 20 provincial or regional governments have amended their family planning laws, including extending maternity leaves for women. For example, eastern Zhejiang province offers 188 days of maternity leave for the third child; and in northern Shaanxi province, female workers can enjoy a total of 350 days paid leave for having a third child, according to state media reports.

But the policies have failed to convince women, who worry that they'll be further disadvantaged as companies seek to avoid the extra financial burden.

At the heart of the issue is the high cost of raising a child, especially among the country's growing middle class. Parents want their children to succeed, and are willing to invest as much time and money as it costs.

While some cities have offered cash incentives, Liang said relying on local governments alone is far from enough. Instead, the central government should dedicate a certain percentage of the country's GDP to provide financial subsidies to families, either in the form of cash payment, tax incentives or other social security benefits.

Another much-needed policy change is to increase daycare centers for young children, Liang said. Currently, only 5% of Chinese children under 3 years old use daycare services, and only 20% of those services are run by the government, according to Xinhua.

But there are also more deeply-rooted structural problems to be addressed. China's high property prices and rising education costs, especially in big cities, have frequently been cited in surveys as the top factors preventing couples from having more children.

Both sectors have been thrust into the spotlight this year, with the debt crisis surrounding property giant Evergrande and the Chinese government's sweeping crackdown on the private tutoring industry.

While the government has never directly admitted it, its crackdown on after-school classes -- which have placed huge pressure on children and growing financial burden on parents -- is widely perceived by the public as part of the broader effort to boost the country's birthrate.

Liang said the measure is only "addressing the symptom," and will be hard to enforce in the long run, as people can always find ways to hire a private tutor.

"I think the long-term solution probably will be to change the college entrance regime," he said, referring to the notoriously tough and competitive exam that millions of Chinese students take every year to get into universities, in the hope of securing a good future.

Such interventionist measures are likely to be the first of many. After years on the fence, the government is now keenly aware of the severity of the problem -- and has showed ample resolve to fix it.

Realistically, the most optimistic scenario for China is to have a fertility level similar to that of Europe, at around 1.6 or 1.7, Liang said. "But that's very hard. You're talking about spending 5% of GDP (to encourage childbirth), or fixing the housing problem and the education problem," he said. "In fact, just maintaining 1.3 is not easy."

US official: drones used by Iran-backed militias provided by China