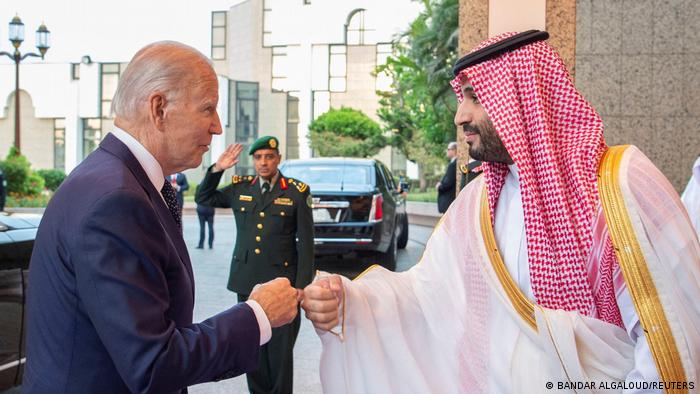 Shafaq News/ President Joe Biden on Friday indicated to Saudi Crown Prince Mohammed bin Salman that he believes the Crown Prince was to blame for the 2018 killing of the journalist Jamal Khashoggi, even as Biden announced several new areas of cooperation aimed at reshaping US-Saudi relations.

The meetings in Jeddah largely seemed to go along with the planned reset of the US relationship with the kingdom after years of strain following Khashoggi's death. But even more than the policy announcements and the formal discussions, it was the personal interactions between the US President -- who once promised to make Saudi Arabia a "pariah" -- and the kingdom's de facto ruler that drew the most attention.

The President was fiercely criticized for fist bumping the Crown Prince during their first in person interaction by human rights groups and fellow Democrats, as well as the publisher of the Washington Post. Those images of Biden and the Crown Prince, also known as MBS, were quickly promoted by the Saudi government, including on Saudi state TV and Twitter.

Biden came to Jeddah seeking solutions to one of his top political problems at home -- high gas prices -- as diplomacy with the kingdom and other allies in the Middle East was seen as one of the few routes he could take to ease the pain at the pump.

Critics argued the fist bump validated bin Salman on the world stage just over a year after the US declassified an intelligence report concluding the Crown Prince personally ordered Khashoggi's killing. Washington Post publisher Fred Ryan said Biden's fist bump was "shameful" because it "projected a level of intimacy and comfort that delivers to MBS the unwarranted redemption he has been desperately seeking."

It was also a stunning gesture for a President who argued on the campaign trail that he would make Saudi Arabia "the pariah that they are" on the world stage and "make them pay the price."

But the President said he was "straightforward and direct in discussing" Khashoggi with the Crown Prince on Friday, and said "I made my view crystal clear."

"For an American President to be silent on the issue of human rights is inconsistent with who we are and who I am. I'll always stand up for our values," Biden told reporters after his meetings with Saudi leadership.

Biden said the Crown Prince again denied his involvement in the murder when he raised the issue with him.

"I indicated I thought he was," Biden said.

U.S. and Saudi announce package of agreements during Biden trip