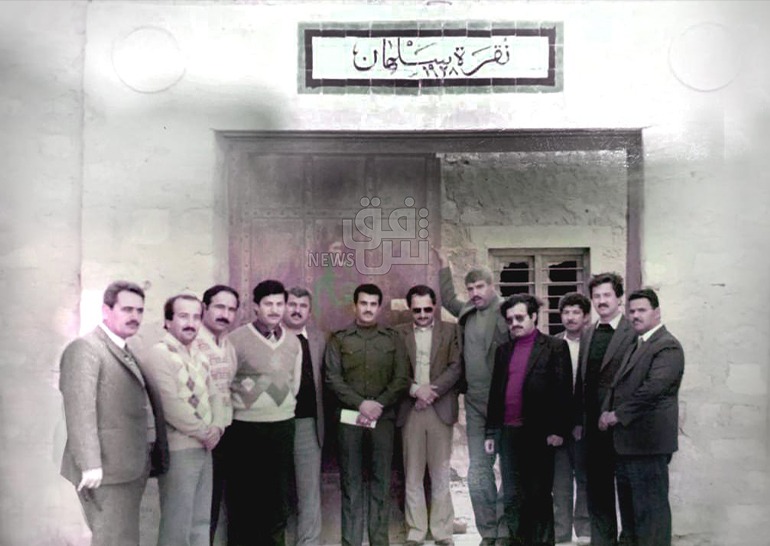 Shafaq News/ Terror, wrought in sometimes utterly mundane ways, was a constant presence in Iraqi society under the reign of Saddam Hussein. Countless Iraqis, even years later, to cope with the wounds they sustained, both inside and outside, in the notorious monuments of fear that Saddam Hussein littered the Iraqi cities with. In fact, features of the former dictator's horrendous legacy that once haunted the Iraqis survived to become a testament to its atrocity.

One of those sites is the "Nugrat al-Salman" prison, located in a bleak desert in southern Iraq's al-Salman district of al-Muthanna governorate. The mere mention of its name inspires horror and a sense of helplessness in the spirit.

Younis Abdul Aziz, a road and bridge engineer who worked on the Nugrat al-Salman prison, wrote in his book, "unpublished documents," about the special stations of his life, including his presence as a child in 1957 when Iraq's last King, Faisal II, opened the Suez Bridge in Mosul, where the author was a first-grade student at Nineveh School.

In his memoirs, Abdul Aziz said that the Nugrat al-Salman prison was built in 1969 under the guidance of the then ruling Ba'ath regime, rather than the old prison.

"They requested us to construct a modern 150-kilometer road connecting the prison to the Saudi border in the south. We, requested that wells be dug every 10 kilometers along the road for our project, though, the water from just one of which was potable, "He stated to Shafaq News Agency.

"The governor of al-Muthanna visited the prison in 1985 and then asked the engineers who had come from Duhok to work there to take him to the new detention facility in Nugrat al-Salman, where they discovered that there were more than 500 young Fayli Kurds detained there after their families had been deported and displaced to Iran after 1980," he added.

"Inside the detention center, the Fayli detainees complained about the scarcity of potable water, which comes from Samawah, the governorate's center, and is hot due to the extreme temperatures in the desert, because the water is transported via water tenders," Abdul Aziz continued.

"The Kurdish engineers offered to provide the detainees with sufficient quantities of potable water every day, and to clear the internal courtyard of the detention center and work large squares inside it for football, basketball, and volleyball so that prisoners could spend their free time playing sports. This was highly appreciated by the detainees, especially when they learned that the engineers were Kurds from Duhok," he said.

"They proposed restoring and cleaning the prison yard of dust and debris, and the governor thanked them in front of the prisoners who applauded them after they were relieved of their long-suffering in prison due to the lack of potable water."

"Some of the inmates' families paid them visits once a month, and we were used to seeing them driving to the prison. However, the frequency of these trips was gradually reduced until they were terminated. We expected the inmates to be relocated elsewhere, but it turned out that they had been executed."

"After 1987, the Kurdish detainees were transferred to that detention facility in Nugrat al-Salman and the Bassiya detention center, 180 kilometers southeast of the southern desert," Abdul Aziz concluded.

Al-Salman area was dubbed the "city of jails" in 1928 when the British built the Salman fortress during their conquest of Iraq, to withstand attacks by the then-Wahhabi movements, and turn it into the headquarters of the Southern Desert Department. in 1948, the castle was converted into a prison.

In 1981, another castle was built and used as the border guards' headquarters; eventually, that castle was converted into a prison.

At the time of Iraq's first Baath Party president, Ahmed Hassan al-Bakr, 120 houses were built for the nomadic people and turned into prisons in the 1980s.

Al-Salman district is located in Samawah's desert, in the middle of a massive valley. According to the Ministry of Planning, the district has a population of 9,348 people, most of whom live on livestock, camels, and agriculture, which depend on artesian wells.

"The district has five prisons: the politicians' prison, al-Qalaa, the woman's prison, Liyah, al-Sheehat, and Abu al-Jad. The former dictatorship used these jails to rid itself of opponents or anyone who disagreed with the Ba'ath Party's policies. As a result, the city became renowned to Iraqis for its jails and its distance from the governorate's center," stated Habib Malih, the leader of the municipal council in the al-Salman district.

Malih advocated for the conversion of prisons into museums to serve as a reminder of the past regime's atrocities against the Fayli Kurds, the Barzanis, and others. He also advocated for transferring the ownership of these jails to the Ministry of Tourism and Antiquities to renovate their structures and make them accessible to the public.