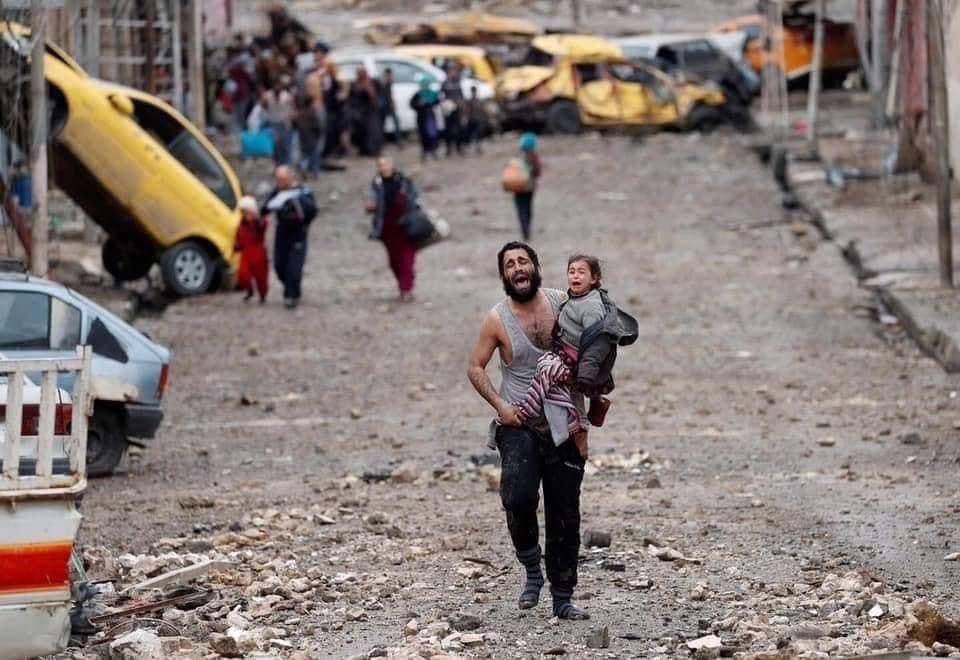 Shafaq News / Abd Taha, a heartbroken tea seller in Mosul, died. He died when his life partner was killed by a shell. He also died when he and his family were surrounded by ISIS and death, and he lastly died waiting for his country to console him.

Abd Taha passed, broken countless times, after muting his pain and wounds made by the fragments of the brutal war that surrounded him and his family in Mosul when the city was at the mercy of ISIS militants.

Abd Taha's famous image, running with his daughter as if fleeing hell, which has been popular in the media around the world, did not help him nor did it bring him the attention of his state, which he might have needed to heal his psychological refraction, after the ruthless trial in which he was forced to walk.

Shafaq News agency, based on his agonizing image in the media world, investigated Abd Taha and learned that he had passed.

At the time, he ran carrying his daughter, screaming for help during the battle of Mosul. Maybe at the time, he believed that his wife had not died after a shell landed on the stricken family members. Abd Taha was also injured, and his daughter seemed terrified, just like the city that lived the ugliest day in its entire history.

He lived with his wounds from shrapnel, after losing his wife, who passed, leaving him with two daughters.

Abd Taha's father told our reporter that his son was selling tea near a government department in the city to raise his daughters and that he suffered a lot from his physical injuries as well as his mental state that has deteriorated since his wife died.

The father also noted that they had not received financial compensation for Abd's wife and now his daughters are alone with no parents.

According to his brother, Ali, Abd Taha lived in difficult circumstances and was suffering from his injuries as well as from losing his wife. As a result, he refrained from marrying for a long while until his family was able to convince him otherwise. Shortly after he received his new child, Abd Taha passed, leaving three orphans behind.

Ali said the situation of Abd Taha and his family was similar to thousands of Mosul's residents whose rights had been lost due to government neglect.

As for the compensation file, Mohammed Ugla, secretary of the Mosul compensation committee, stated that previously, the procedures used to take several months. However, after transferring the security audit file to Baghdad, the audit alone started taking between one and two and a half years, which greatly delayed the transactions or the compensation of property, real estate, and furniture.

Ali Meyzer Al-Jarba, vice president of the Office of the High Commissioner for Human Rights, accused the central government and provincial deputies of failing in this file. Stressing that the completion of transactions is like humiliation for their owners for what they suffer, as some transactions may take more than three years to complete, which is a long and very harsh period for the victims’ families, the majority of whom live in destitution and deprivation after losing their breadwinner.

Shafaq News agency tried to obtain an accurate statistic on the number of victims in Mosul, but neither the Health Department nor the Martyrs' Foundation were able to provide any accurate statistics for the figures were still rising as the transactions were being completed. Nevertheless, UNHCR estimates that thousands of victims and injuries are reported, as confirmed by Al-Jarba.

In addition to this tragedy, the missing people's file remains the most complex, especially since dozens of mass graves have not yet been opened in Nineveh, the largest of which is the Al-Khasfa mass grave, which, according to UNHCR, contains more than 5,000 bodies.

For all this, and more, Abd Taha may have died, in oppression.

Symbioses of power in Iraq and the Popular Mobilisation Units