Mazloum Abdi: 4,000 PKK fighters died in Syria.. The days of Kurds fighting each other are over 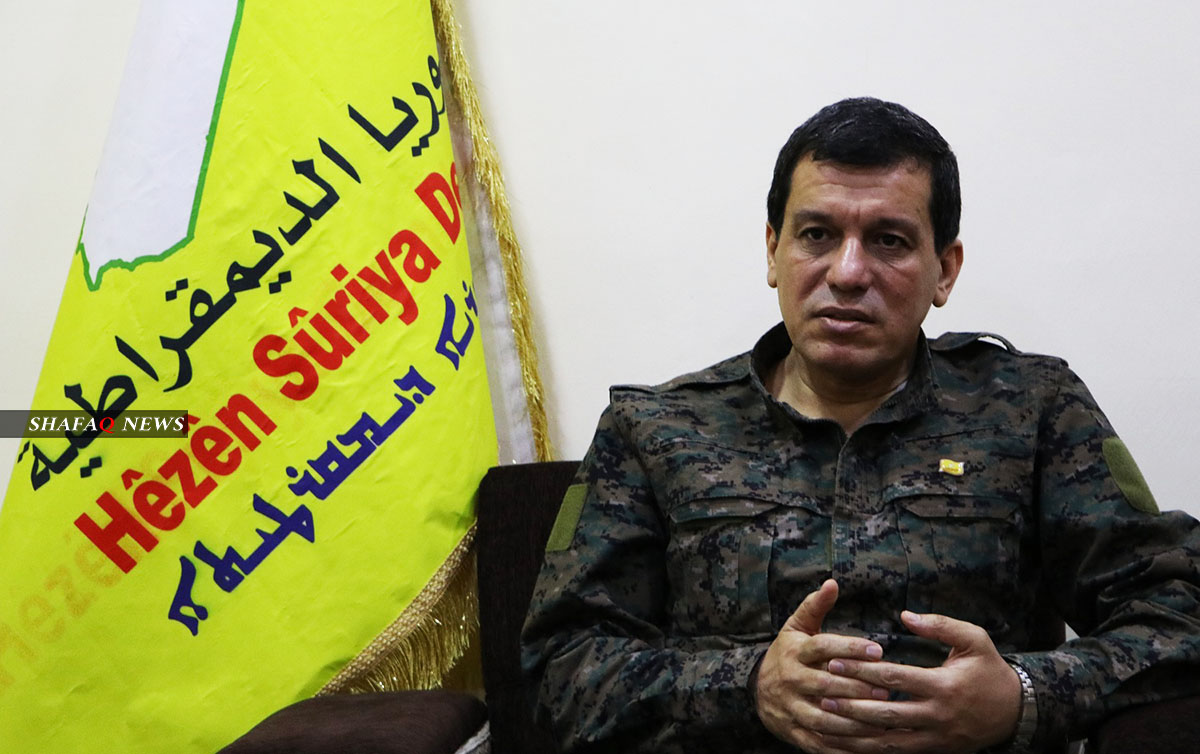 Shafaq News/ The Syrian Democratic Forces’ (SDF) Commander-in-Chief, Mazloum Abdi said that the anti-Turkish Kurdistan’s Workers' Party’s (PKK) Gerila Forces have provided 4,000 victims in defense of Kurdish areas in north-eastern Syria.. stressing that they will not hesitate to ask for help from any Kurdish forces in the event of a new attack.

Abdi's remarks came during an interview with Ronahi TV channel; in which he talked about many political, administrative, and military issues.

Abdi pointed to the agreement's role between the Kurdish political movement’s two poles in turning over the military equation in favor of the Kurds in Syria, "In 2014, the Movement for a Democratic Society and the Kurdish National Council signed an agreement on Kurdish unity and demanded the Kurdish forces support when the city of Kobane was attacked by ISIS”.

"These forces are not only our allies, but also they are our brothers and this is an internal matter.. we are united and the Kurdish forces supported us in the Battle of Kobane. PKK fighters fought alongside us for years and 4,000 of them were martyred.. they were on our side until the end”, Abdi added.

Abdi said that talks between the Kurdish National Council and the Kurdish National Unity’s Parties are continuing; noting that the suspension of these talks for a certain period was due to technical reasons related to the presence of the council delegation outside the region, as well as the absence of U.S. State Department’s representatives overseeing the elections.

"Some good work has been done. There were problems with the Kurdish unit in Rojava (Syria’s Kurdistan); a few of which were overtaken. What we have concluded from these talks is that the Kurds can solve their problems and achieve their unity if they want to. The outstanding issues are not fundamental, they can be resolved through dialogue”, Abdi said.

*The Kurdish-Kurdish fighting is a past

The SDF commander commented on the tension between the Peshmerga forces and the PKK’s fighters in Kurdistan, “The Kurdish forces and the Bashur (Iraq’s Kurdistan) forces were fighting among themselves. There were clashes between the Kurdistan Democratic Party (KDP) and the PKK, but that phase is past now and the forces have changed and formed a Kurdish public opinion. Therefore, you will not find any force that wants war; as any internal Kurdish dispute will damage the Kurds' gains. The Kurds will not tolerate any force that enters a war of this kind”.

Abdi called on the KDP and the PKK to resolve their differences through dialogue, stressing the Kurds’ intolerance to any fighting between the two sides.

*Self-management in a vast area

"Our area is sprawling (five times the size of Lebanon) and millions of people live here. There are seven autonomous departments; Half of which are made up of Arabs and other components.. there is a lot of components in the region and they will make their own decision”, said Abdi about the vast geographical area controlled by self-administration in northern and eastern Syria.

*Addressing corruption and shortcomings, and working to ensure the judiciary’s independence

Mazloum Abdi addressed the issue of corruption and shortcomings within self-administration and did not hide the people’s complaints from the judicial’s arrest and trial procedures, "The self-administration was established in war circumstances, and that was not easy.. Several shortcomings must be completed and we will work with self-management to address these issues”.

"We are approaching a new year. However, the risks remain. Our enemies are seeking new attacks, and they are seeking to eliminate self-management. Our people must be prepared for such situations. We -in the military, are keeping our preparedness; we are ready to counter and defeat any attack”, Abdi added.

The commander of the Syrian Democratic forces concluded by sending a message to the autonomous region’s people; wishing them to defend his revolution and his gains, “You should participate more effectively in self-management. We must be confident about our future.. Our chances are stronger than the enemies'. We have to continue to fight with great determination and to protect the gains of our revolution”.

Jihadis from Syria blamed for multiple attacks on Iraqi Kurds

After a gap of decades.. the cultivation of tobacco resurrects in Derik

In Syria and Iraq IS is still capable, but no global threat, Report

In the shadow of oil rigs, Syrians feed on landfills