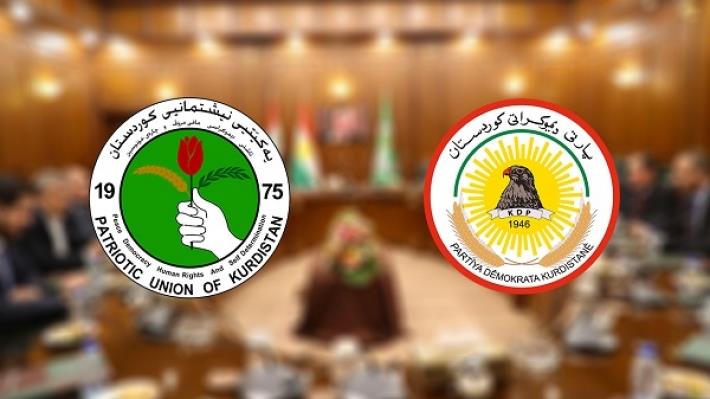 Shafaq News / The bright sun of Kurdistan is obscured by gloomy clouds. Those clouds, however, do not augur a spring rain that moistens the weather and spreads a soothing earthy scent in the air; instead, they usher a calamitous political climate that brings back abhorrent memories of a conflict that was left to simmer for sixty years.

The differences and tensions that have been accumulating for decades threaten to eliminate all the achievements and sacrifices made to bring about the stability that the Region's components have long been deprived of, politically, militarily, economically, socially, and culturally, unless the "responsible" leaders deviate from the policy of partisan rivalry.

It is unclear whether the absence of "Mam Jalal Talabani's" aura led to open a gap through which more cases of tension and conflict entered or whether the escalating mistrust between the two major parties, the Kurdistan Democratic Party (K.D.P.) and the Patriotic Union of Kurdistan (P.U.K.), is what is primarily igniting the conflict, including the assassination of a senior security official a few months ago.

But it is undeniable, as observers have noted, that the crisis between the two parties is worsening to the point where public accusations and condemnation are being traded, as was the case a few days ago between Masrour Barzani, the president of the regional government, and the P.U.K. leadership.

On Tuesday, leader Masoud Barzani stressed during a meeting with a high-level U.S. delegation that fair and transparent elections must be held in the Region this year, and that no justification for postponing them will be tolerated. He also expressed the hope that the coordination between the political parties will continue in order to overcome the challenges and support the regional government.

For his part, Nechirvan Barzani, the president of the Region, broke the impasse last May when he took an unprecedented first step by traveling to al-Sulaymaniyah, where he met with Bafel Talabani, the leader of the P.U.K., and other political leaders. He emphasized the "importance of dialogue between the political parties, harmony, joint work, and unity of ranks between the Kurdish parties," stating that the "unity of voice" will have "a beneficial impact on the general situation in the region and improve the position of Kurdistan in Baghdad."

However, balances shifted after a string of incidents, including the assassination of intelligence chief Hawkar al-Jaff on October 7, the tension that accompanied the P.U.K.'s resolve to support its candidate for the position of Iraq's president, then hints from political leaders in the P.U.K. of the "separation" of al-Sulaymaniyah, Haljaba, Garmyan, and Raperin from the Region, the P.U.K.'s ministers boycott of government meetings in Erbil, and Kurdistan's Regional Government's (K.R.G.) complaints that the main party in al-Sulaymaniyah does not deliver revenues from border crossings. On the other hand, the P.U.K. criticized Masrour Barzani's government for not fairly distributing salaries and revenues among Kurdistan's regions, accusing the government of imposing a "planned siege" on al-Sulaymaniyah.

The conflict between the two parties, however, dates back to the 1960s, when Ibrahim Ahmed, the late Iraqi president Jalal Talabani's father-in-law, separated from the K.D.P. led by Mullah Mustafa Barzani, during the Kurdish people's uprising to demand their rights from the republican rule in what was later referred to as the "September Revolution."

It is noteworthy that after the international plot against the Kurds with the accord of March 6, 1975, and the temporary cessation of the armed struggle, Talabani founded the Patriotic Union of Kurdistan Party in the same year, and a relationship of competition, tension, and conflict arose from the beginning. At the time, the two parties did not hesitate to resort to arms on several occasions, as was the case in the years 1978, 1994, and then the battles of 1995 that lasted until 1998, and they shared areas of influence in Iraqi Kurdistan.

As the Kurds and Iraqis, in general, recall the role Masoud Barzani and Jalal Talabani played in the establishment of the Iraqi transitional government and the drafting of the country's permanent constitution, where the Kurdish voice was largely united during negotiations with other parties, many now fear that the partisan conflict will result in the loss of the accomplishments made after the opportunity provided by the overthrow of Saddam Hussein's in 2003.

The future of Kurdistan is uncertain in the presence of conflicts and the absence of a unified authority, the rule of law, and a national strategy because, according to observers, if the differences between the two main parties do not end, solutions will only be temporary. The partisan, political, Peshmerga, and military work will also not go as it should.

Moreover, Observers note that the current disagreements are related to fundamental matters, including how the government must be managed between the parties involved. This suggests that power, opposition, party, and political life, and even the existence of the Peshmerga, have lost all of their relevance.

According to observers, it is common for the two sides to meet, but the question is whether the meetings are significant. They believe this is unlikely because they will not address the root causes of the issues that have sparked the conflict to last for decades, including the division of the Kurdistan Region, corruption, the absence of a constitution, and institutional governance, and instead focus on the consequences as a result.

There is no viable solution that does not start with normalizing relations between the two parties. They must engage in a national dialogue, resulting in a historic agreement that ushers in a new era for the Region, one in which there are no more conflicts, institutions are strengthened, and competition is natural and democratic within the bounds of everything that has been agreed upon.

Furthermore, observers confirmed that tensions intensified following the assassination of Colonel Hawkar al-Jaff last October, especially after senior security members of the P.U.K. were accused of assassinating him. The P.U.K. vehemently denied its involvement and demanded a thorough inquiry into the incident, but also pleaded with K.R.G. to withhold the identities of the perpetrators involved. However, the Barzani-led administration and the Kurdistan Security Council publicized the names and confessions of the perpetrators anyway, exacerbating the controversy.

Journalist Serbest Barzo believes that the K.D.P-P.U.K contention is an issue of "miscommunication". According to Barzo, the P.U.K. is not a single entity with a single discourse, and its leadership lacks the political competence to harness the polarity inside the party.

"Everyone is aware that the P.U.K. is governed by a neighboring country and draws all of its positions from that state," said Barzo, adding that "while the K.D.P. does not have a rivalry with any party, some deal with it on the premise of one. The K.D.P. is unsure of whether to address the P.U.K.'s head or a wing within it because we observe the emergence of new leadership in every era and another."

He also criticized the Kurdish Islamic parties' stances, saying that they fuel the fire by creating fake crises and lacking strong, influential positions.

Barzo did not rule out the possibility that the disagreements between the two main Kurdish players will have ramifications on the relations between the center and the Region, in addition to impacting the Kurdish position in Baghdad. "The disagreements will also significantly impact the disputed areas because those areas require a unified Kurdish position. Also, residents there are waiting for the two main parties, in particular, to enter a unified list in the upcoming elections so that the Kurds move with a unified position to solve the problems of the disputed areas."

Adalet Abdullah, a Kurdish researcher, and writer, urged Prime Minister Masrour Barzani to present any initiative that unites his ministerial staff and their stance on contentious files because any tension inside the cabinet harms the market, the media, and the citizens. He also called for adopting a rational slogan through dialogue because there is no alternative.

Moreover, as the two major parties need "national mediation", Abdullah urged other political parties, particularly those with influence, to contribute to calming the situation.

He also believed that because no party is immune from disagreements and conflicts, let alone a party like the P.U.K., the K.D.P. must take into account the internal circumstances of its political partner in the government and refrain from directly or implicitly interfering in any of its internal conflicts.

In addition, he emphasized that the K.D.P. was expected to take the lead and contribute to avoiding escalating conflicts among its political and administrative partner's ranks because doing so would have a detrimental impact on the stability of the ministerial cabinet.

Furthermore, according to independent observer Fakhir Izz al-Din, the Kurdistan Region's budget, and income were initially split between the two parties' spheres of influence (57% for the K.D.P. region-yellow zone) and 43% for the P.U.K. region (green zone). Still, they have since adopted increasingly divergent perspectives on how to divide the Region's income.

Izz al-Din clarified that from the viewpoints of Barzani and the K.D.P., the governorates' salaries should be paid by the K.R.G., and their budgets should be set based on their respective incomes. Talabani and the P.U.K., on the other hand, suggest that K.R.G. gather all of the revenue and then distribute it to all regions as required.

"P.U.K. leaders claim that al-Sulaymaniyah's income from oil revenues, taxes, and the proceeds from two international border crossings are still insufficient to cover the basic needs of the governorate's budget and salaries, as the lack of funds has resulted in a wage crisis in parts of al-Sulaymaniyah like Halabja, Garmyan, and Raperin, which has delayed the distribution of salaries."

Izz al-Din also confirmed that in the P.U.K. region, natural gas production appears to be on the upswing, as the production rate of the Kor Mor and Chemchemal oil fields at the end of 2021, for instance, reached 452 million cubic meters per day, according to a new project between Dana Gas and the American Financial Development Corporation (KM250). "It is estimated that the majority of natural gas in the Kurdistan region may be under the control of the P.U.K., which pushes companies such as Dana Gas towards expanding operations."

"Concerning the Kor Mor field, Dana Gas expects production to reach 700 million cubic meters per day by April 2023, after which the KM500 project under construction aims to produce one billion cubic meters of natural gas per day."

Nechirvan Barzani declared at the start of the new year that "We should all prioritize serving the needs of the people of Kurdistan. Let us see the start of the new year as a new chapter in relations between political forces and parties and all elements of the Region begins. Let's view it as a time for unity, harmony, coherence, and acceptance. Let us cooperate to protect constitutional and federal rights, and settle conflicts with the Iraqi federal government constitutionally."

As his performance was covered by Reuters in December last year on the Kurdish-Kurdish disputes that are raising concerns in Washington, it was a new message that reinvigorated the clear constants of what should be. A flood of P.U.K. security force defectors caused tensions to rise. Nechirvan Barzani, despite his K.D.P. connection, intervened to defuse them in November when shooters linked to former P.U.K. intelligence chief Salman Amin threatened to kill Qubad Talabani if Barzani hadn't intervened. He assisted once more when Bafel Talabani, Qubad Talabani, and security personnel traveled to Erbil in a "provocative" act and could not leave the airport until Barzani stepped in.

The Kurds have long been referred to as the "greatest winner" of Saddam Hussein's demise, not only because of the blood they shed under his rule but also because of their outstanding political, economic, and cultural achievements. But, on the other hand, analysts, as well as many Kurds, believe that all "achievements" are in jeopardy as long as the doors to genuine reconciliation are not flung open.