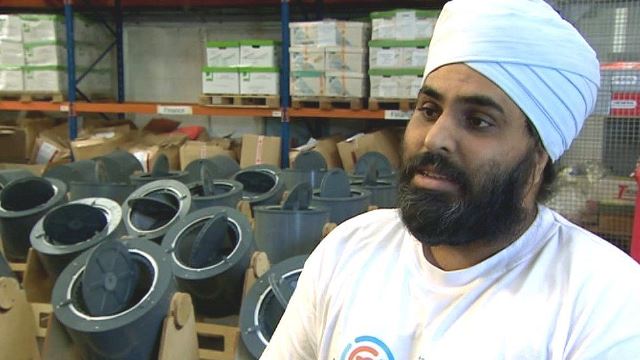 Shafaq News/ The first batch of 30 hand-cranked washing machines, invented by a student for those living in poverty, has been sent to a camp in northern Iraq.

Former University of Bath student, Navjot Sawhney, set up the Washing Machine Project in 2018 after being inspired by a salad spinner.

Since then volunteers and businesses have given their time for free to help make the low-cost machines.

Mr Sawhney said he was "so proud" of what had been achieved.

He said up to 70% of the world's population do not have access to electric washing machines.

Working with humanitarian charity Care International he is now aiming to deliver 7,500 of his manual washer and dryers to those most in need in 10 countries including Lebanon, Kenya and India over the next three years.

Mr Sawhney came up with the idea after quitting his engineering job in Wiltshire to volunteer in India, where he saw the struggle of his next-door neighbour - a woman called Divya.

"It was through the frustration of seeing her daily struggles, hand washing her and her family's clothes, that I promised her a manual washing machine," he said.

Named the Divya, in her honour, the "robust, simple to use and easily repairable" machine has been tested in countries around the world.

Mr Sawhney said the reaction has been "phenomenal".

"Hand washing clothes is very time consuming, and nobody likes hand washing their clothes, so as a problem everybody understands it," he said.

"We've been so lucky. We've had universities, companies and people who just want to give up their time, and that's such a humbling thought for me."

Among those helping out is a Bristol design and fabrication firm, Huxlo, which makes all of the PVC and wooden parts.

"We gave up our time to make this happen, because it's a really worthwhile project," said Matthew Mews, from Huxlo.

"It's super rewarding to see this go from just a sketch to an actual product going out and helping people."

The University of Bath, where Mr Sawhney studied, has also helped turn his designs into reality.

"We've been able to throw some ideas back to him [Mr Sawhney] and very quickly come up with some solutions," said university technician Owen Rutter.

Mr Sawhney, said he will be heading to Iraq at the beginning of September to help distribute the machines.