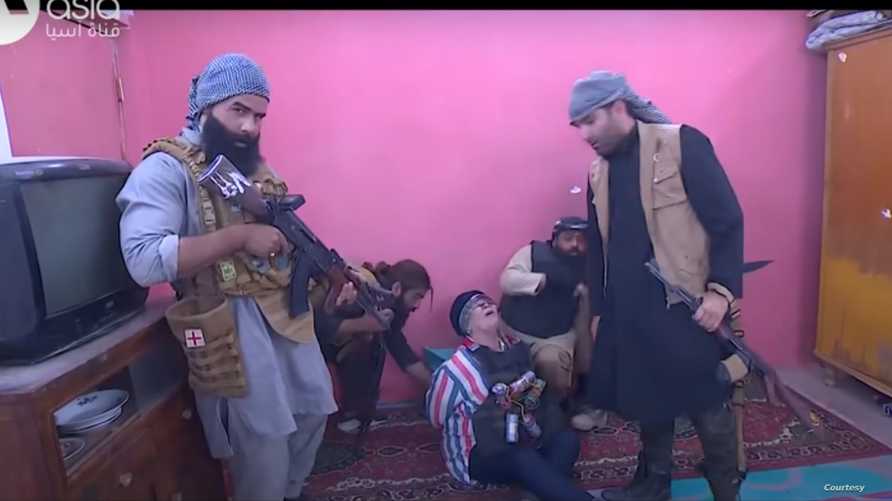 Shafaq News/ Middle East Online (MEO) criticized an Iraqi TV program that shows a camera follows a celebrity visiting an Iraqi family displaced by conflict, when they’re ambushed by extremists. The star is convinced they’re done for until troops come to the rescue.

What looks like a close shave is, in fact, a “candid camera”-style television show airing during the Muslim holy month of Ramadan that takes tricking celebrities for laughs to a new level. Mea said.

The scene is the same every time: a celebrity, invited for a charitable project, visits the home of a family said to have escaped the clutches of the Islamic State (ISIS) extremist group.

Once inside, actors disguised as jihadist extremists pounce. The terrorists may be fake, but the pleas of the trapped celebrities are very real.

When star footballer Alaa Mhawi appeared on the show called “Tanneb Rislan”, he found himself on his knees, blindfolded, begging for his life.

“I’m your brother, I’m Iraqi and I represent the whole nation”, he shouts, on the verge of tears.

But once the ruse is revealed, the celebrities can’t complain too much.

Mea said the series is underwritten by the Popular Mobilization Forces (PMF).

Analysts saw in the PMF’s sponsoring of the scare show a way of reminding the public of their role in the military campaign that by mid-2017 had dislodged ISIS from the string of cities it seized three years earlier.  Reviving fears of ISIS is another psy-war tactic that cannot hurt the standing of the PMF in Iraq on the eve of elections. According to mea.

At the end of the episode featuring Mhawi, the international footballer also had to suffer a professional putdown.

“You fly the Iraqi flag on the football pitch, but the Hashed, the army and police, they do it by sacrificing martyrs”, the presenter said.

Nessma, an actress in her fifties, didn’t plead for her life. Instead, she passed out after a fake explosive belt was strapped to her waist.

She stayed unconscious for several minutes until the presenter, in Hashed uniform, emptied a bottle of water on her face.

“This isn’t entertainment”, Bilal al-Mosuli, a resident of Mosul, the self-proclaimed “capital” of ISIS in Iraq from 2014 to 2017, wrote on Twitter.

Another Iraqi, Ahmed Abderradi, expressed disbelief at the show on Facebook.

“Next year, we’ll have Saddam”, he joked bitterly, referring to Saddam Hussein, the man who ruled Iraq from 1979 to 2003, Saddam Hussein.

“Or we can throw guests into a river like the victims of Speicher”, he wrote, referring to the 2014 Camp Speicher massacre, when ISIS executed 1,700 Shia conscripts and dumped their bodies in the Tigris.

The Middle East Online said, “For years, entrapping stars has become a staple of prime-time Ramadan shows on Arab satellite channels. But this is the first time an Iraqi programme has combined the formula with terrorism, which is still a real threat in Iraq.”

Extremism violence is still a fact of life in Iraq.

The home of the so-called displaced family in the show is located in the agricultural belt outside Baghdad where IS sleeper cells still intimidate and extort locals.

According to social media user Hamed al-Daamy, “the show is giving free advertising to IS and other terrorist groups”.

A writer of the show, Dargham Abu Rghif, has sprung to its defence, setting out Hashed’s message behind the production.

“The scenes are harsh but… if ISIS had won, artists would have had a far harder life, and all Iraqis too”, he wrote on Facebook.