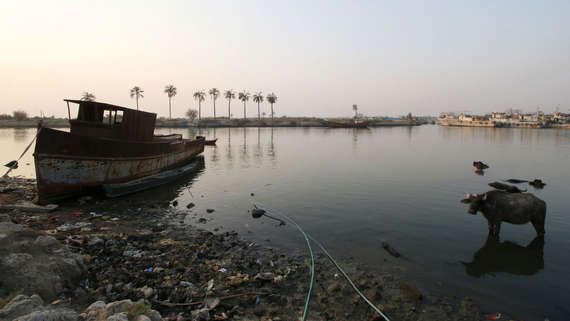 "The Minister of Water Resources Mahdi Rashid Al-Hamdani received, today, in his office, the Iranian ambassador to Baghdad, Iraj Masjidi and the accompanying delegation," the ministry said in a statement received by Shafaq News agency, noting that the latter congratulated the minister for assuming his position.

According to the statement, “Minister Al-Hamdani presented the problems of shared water with neighboring Iran, the most important of which is the pollution of the Shatt Al-Arab water as a result of the interruption of the flow of the Karun River water from the Iranian side since the beginning of June of each year until October, which negatively affects the quality of Shatt Al-Arab water and Salt concentrations," calling on the Iranian side, "increase water releases from Karun River in this critical period."

"the meeting presented the issues of rivers and joint valleys, as well as the issue of the lack of water revenues for the river that feed the Dokan and Darbandikhan dams," stressing, "the necessity of bilateral cooperation between the two countries and holding high-level meetings soon, whether in Iraq or the Islamic Republic of Iran; as well as activating the work of the joint committees formed under a memorandum Understanding signed in 2012 to reach agreements guaranteeing Iraq's water rights."

For his part, the Iranian ambassador welcomed the proposals of the Iraqi minister and invited him to hold urgent meetings with his Iranian counterpart and specialists in water affairs to resolve issues related to this file and expressed his willingness to directly intervene with the leaders of the Iranian government to facilitate these procedures.

"Karun" river originates in Al-Ahwaz on the Iranian side and is considered one of the oldest rivers. It runs within the Zagros mountain and then flows into Shatt al-Arab, which continues to the Arab Gulf, forming the Delta of Abadan Island. Karun River runs over 950 km.