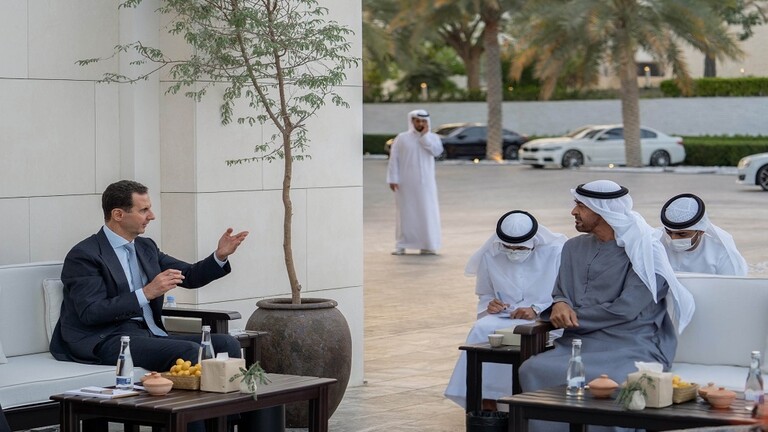 Shafaq News/ The United States, in a statement responding to Syrian President Bashar Al-Assad’s visit on Friday to the United Arab Emirates, said it was “profoundly disappointed and troubled by this apparent attempt to legitimize” Assad.

“We urge states considering engagement with the Assad regime to weigh carefully the horrific atrocities visited by the regime on the Syrians over the last decade, as well as the regime’s continuing efforts to deny much of the country access to humanitarian aid and security,” State Department spokesperson Ned Price said.

US State Department spokesman Ned Price urged - in press statements - "that countries considering communicating with the Assad regime to carefully study the horrific atrocities it has committed against Syrians over the past decade, as well as its continuous attempts to deprive most of the country of access to humanitarian aid and security.".

The spokesman told Al-Jazeera that Bashar al-Assad is "responsible for the arrest and disappearance of more than 150,000 people," stressing that Washington will not lift the sanctions imposed on Damascus, and will not support the reconstruction of Syria until political progress is made.

Ned Price recalled a statement by US Secretary of State Anthony Blinken, in which he said that the United States "does not support the rehabilitation of Assad, nor do we support normalization with him."

Last Tuesday, Britain, France, Germany, Italy, and the United States issued a joint statement, saying that they "do not support efforts to normalize relations with the Assad regime."

The joint statement came on the occasion of the 11th anniversary of the start of protests against the regime of Bashar al-Assad, which turned into a demand for the overthrow of his regime. Thousands of people commemorated the anniversary in Idlib and other cities that are still outside al-Assad's control.

Yesterday, Friday, the Syrian President visited the UAE, making it the first Arab country to visit since the outbreak of the revolution against his regime in 2011. The Emirates News Agency said that the Crown Prince of Abu Dhabi received the Syrian President, and discussed with him "brotherly relations, cooperation and joint coordination."

It added that Sheikh Mohammed bin Zayed stressed that Syria "is a fundamental pillar of Arab security, and that the UAE is keen to strengthen cooperation with it to achieve the aspirations of the brotherly Syrian people towards stability and development."

The agency stated that Sheikh Mohammed bin Rashid, Vice President and Prime Minister of the UAE and Ruler of Dubai, also received Bashar al-Assad, and indicated that the discussion touched on "a review of the current situation in Syria, as well as various developments on the Arab and international arenas, and all issues of common concern."

The agency added that the UAE Prime Minister affirmed his country's keenness to "discover new paths for constructive cooperation with Syria, and to monitor opportunities through which various aspects of cooperation can be pushed forward."

The agency indicated that Assad left the UAE after meeting with senior officials.

The UAE has been at the fore in the efforts of some Arab countries to normalize relations with the Assad regime in recent times.

Al-Assad received in Damascus the UAE Foreign Minister, Abdullah bin Zayed, last November, and this was the first visit of a high-ranking Gulf official since several Gulf countries cut diplomatic relations with the Assad regime following the outbreak of the Syrian revolution in 2011. Washington expressed its dissatisfaction with the visit.

Washington confirms its commitment to cooperate with Kurdistan

US deploying 2,000 troops to Iraq for nine month period: Report