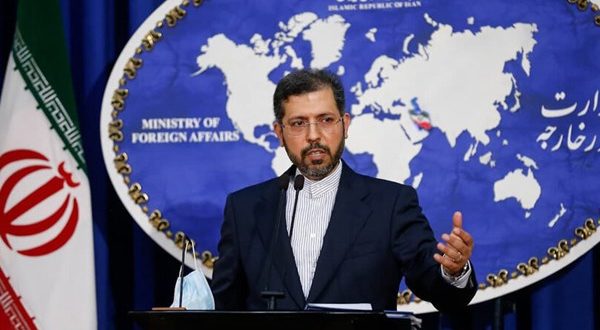 Shafaq News/ Iranian Foreign Ministry Spokesman Saeed Khatibzadeh said Iran opposes any military action or use of force in other countries, adding that Turkey should talk with Syrian government to resolve its security concerns.

"The Islamic Republic of Iran opposes any military action and the use of force on the territory of other countries in order to resolve disputes between them, and considers it a violation of the territorial integrity and national sovereignty of those countries," Iranian Foreign Ministry Spokesman Saeed Khatibzadeh said in answer to question on Saturday about Iran's reaction to Turkey's possible military action in northeastern Syria.

Khatibzadeh said that Turkey's planned military action could complicate the situation and escalate the tensions.

The spokesman pointed out that while Iran understands Turkey's security concerns, it believes the only way to address those concerns is through dialogue, respect for bilateral agreements with its neighbors, as well as agreements reached within the Astana talks Format, including respect for Syria's territorial integrity and national sovereignty, as well as respect for the principle of non-use of force.

"Experience has shown in the last few years that military action in other countries not only does not help to solve the problems, but instead it would come with worrying human consequences and will further complicate the situation in the region," he further highlighted.

"The Islamic Republic of Iran is ready as before to play a role and use collective efforts to prevent the escalation of the crisis and any conflict whose victims will be only defenseless and civilian people," he concluded.

Iran: No talk of interim deal in Vienna