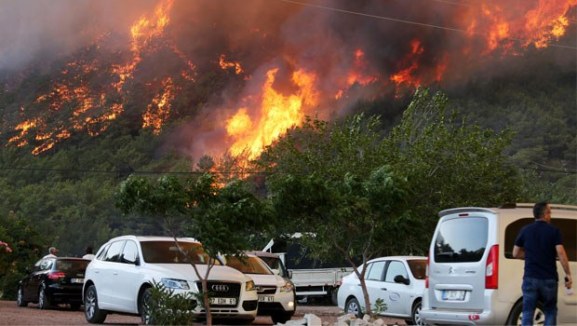 Shafaq News/ The Children of Fire initiative in Turkey has claimed responsibility for igniting fires in the country.

The Turkish newspaper Yeni Şafak, which reported the news, said that the group "linked to the Kurdistan Workers' Party, which is banned in Turkey, has claimed responsibility for the forest fires."

It added, "The group confirmed in its announcement that the Turkish regime does not understand another language, so we decided to bring it to its knees with fire."

The Turkish emergency services confirmed that they were able to control 107 forest fires in the country, since last Wednesday.

The newspaper pointed out that eight people were killed and about 100 Russian tourists were evacuated from Bodrum, Turkey.

For his turn, Turkish President Recep Tayyip Erdogan urged everyone to "wait for the investigation results to uncover the reasons for the fire."