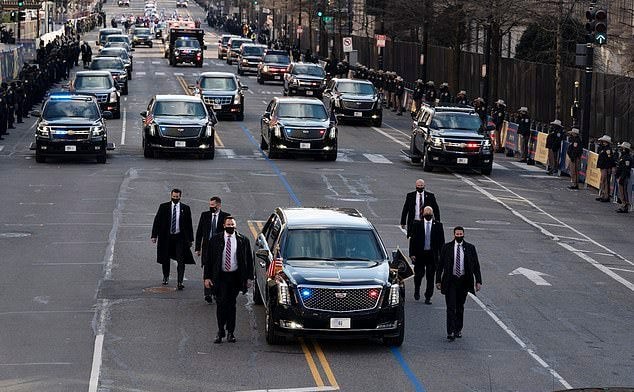 Shafaq News/ Joe Biden The Beast is set to leave his presidential limo ‘The Beast’ in the US when he attends the G7 summit in Cornwall because it could get stuck in the county’s narrow and winding roads.

The US President will come to Carbis Bay in June for what could be his first overseas trip in office.

It is expected he will be driven around the seaside resort, just along the coast from St Ives, in a smaller armoured SUV rather than his immense official car.

The Beast is the nickname for the specially built £1.1million Cadillac with 5in-thick bulletproof windows in which the president travels.

Encased in ballistic armour and weighing about nine tons, it contains a sealed cabin with an oxygen supply and bags of blood matching the president’s type in case of a medical emergency.

Should anyone grab the door handles without authorisation, a 120-volt shock can be delivered at the flick of a switch.

The car can also emit tear gas and flood the road with nails or an oil slick. But because of its length – 18ft – the vehicle can sometimes be tricky to manoeuvre.

In 2009, during a visit by Barack Obama to see Gordon Brown, the car almost got stuck as it attempted to turn around in Downing Street, eventually managing it after five attempts.

Two years later, a decoy version got caught as it attempted to roll over an exit ramp at the gates of the US embassy in Dublin.

In June, Mr Biden is expected to fly into Newquay airport on Air Force One, the presidential aircraft, and helicopter Marine One will take him on to Carbis Bay.

A final decision on what car to use will be taken after a recce of the area is completed in the coming weeks, US sources said.

Donald Trump brought The Beast to London for his 2019 state visit. But for the 2019 G7 summit in Biarritz, a seaside resort in the south-west of France, he was driven in a smaller armoured SUV. He used a similar car last October when he drove past supporters at the hospital where he was being treated for Covid-19.

The June summit – also attended by Germany, France, Canada, Italy and Japan, and Australia, India, South Korea and the EU as guests – will be the first opportunity for Boris Johnson to meet Mr Biden.

No 10 has said it estimates the summit will provide a £50 million boost to the local economy.

The President looked to double the minimum wage for Americans yesterday to help kickstart the US economy. Mr Biden ordered agencies to start work on an executive order requiring federal contractors to be paid $15 an hour (£11), more than double the current $7.25.

He also increased payments to food welfare claimants by an average of £36 a month for a family of three.