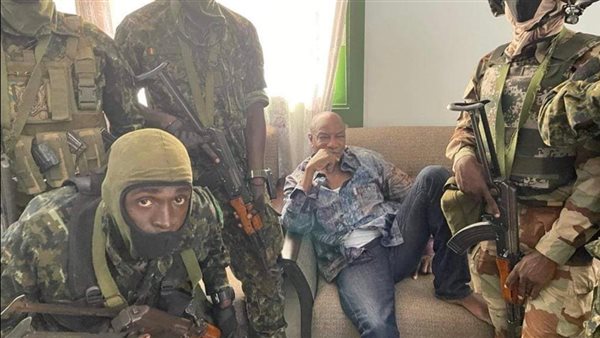 Shafaq News/ On Sunday, a group of soldiers arrested the President of Guinea, Alpha Condé, in an attempted coup which has already resulted in a statement by the alleged coup leader about the dissolution of the Government and the closure of borders.

Events have rushed from the first hour, when several local media echoes of shooting with automatic weapons by the military in Conakry and, in particular, in the Kaloum neighborhood, a peninsular end of the city that houses important buildings, including the presidential palace, the Sékoutoureya, from where they could have taken the 83-year-old Condé . In the same area are the Ministry of Defense and the headquarters of the General Staff.

Accesses have been blocked, while the military themselves and even foreign embassies have urged citizens to do not go out waiting for what was happening to be clarified. “Everybody is at home and the shots are getting louder and louder,” Kaloum’s neighbor, Mohamed Morgan, told the Bloomberg news agency.

Sources cited by the RFI station and by the Jeune Afrique portal have identified the perpetrators of the shots as members of the Special Forces Group, a body created in 2018. The group is led by a former legionary of the French Armed Forces, the Lieutenant Colonel Mamady Doumbouya, who has already been seen in a video broadcast on social networks.

In it, Doumbouya appears wearing a red beret and sunglasses flanked by two other uniformed men and going over a list of grievances attributed to Condé and his party, including activities of corruption and social poverty, and announces that it has ordered the dissolution of the main institutions and the annulment of the current Constitution. It also proclaims the closure of borders.

“The socio-political and economic situation of the country, the dysfunction of the republican institutions, the instrumentalization of justice, the trampling of the rights of the citizens, the economic mismanagement (…) have led the republican army to assume its responsibilities against to the people of Guinea “, explains Doumbuya in the recording. It also announces the formation of a National Committee for the Union and Development that takes power.

The coup leaders have also released images of Condé, showing him sitting in an armchair, with his shirt open and barefoot and surrounded by soldiers to prove his alleged arrest, according to the portal ‘Guineenews’. The images contrast with the first reaction of the Guinean government, which, through the mouth of the secretary general of the presidency, Naby Yusuf Kiridi Bangura, wanted to defend that “the situation is under control,” according to the ‘Bloomberg’ news agency.

The military rebellion consummated this Sunday stems from months of political tensions in which Doumbouya has tried to make his group gain more weight. In May, there was speculation about the possible arrest of this officer.

Doumbouya himself has called for the “unity” of his “brothers in arms” since they remain in their barracks, but it is doubtful whether the rest of the Army will follow the GPS. “The forces loyal to Alpha Condé have not said their last word, but the president is truly in the hands of the coup plotters,” a person close to the president acknowledged in statements to Jeune Afrique.

Condé, 83, started a third term in December 2020, after winning an election that the opposition considered fraudulent. His intention to remain in power had already caused a spike in tensions that dates back to 2019 and that resulted in several deaths.

The current president came to power in 2010 after decades as an opposition leader under the Lansana Conté dictatorship and, to run for a third term, he required a change in the Constitution.

Condé already suffered in 2011 another coup attempt, although the sources cited by Jeune Afrique consider that now the situation is more serious.