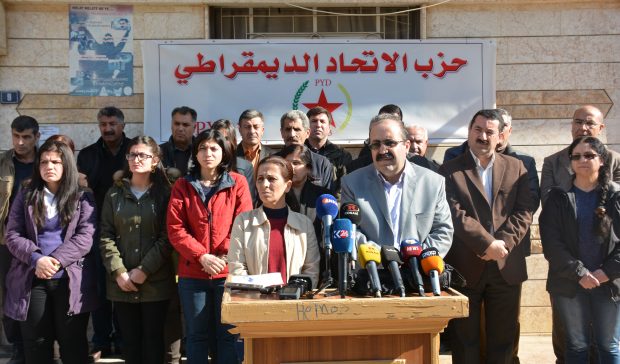 Shafaq News / The General Council of the Democratic Union Party (PYD) called on the leadership of the Kurdistan Democratic Party to establish a "peaceful solution and start a dialogue" with PKK deeming military methods as "Useless".

Members of the Peshmerga and the Kurdistan Workers' Party (PKK) exchanged fire last Sunday evening at a security checkpoint north of Duhok Governorate. The incident resulted in the death of the First lieutenant in the Peshmerga forces, Abd al-Rahman Amin Sheikh Musa.

The Democratic Union said in a statement received by Shafaq News agency, "We condemn the attack launched by the Peshmerga Roj on the Karela, and we condemn the Kurdish-Kurdish battle that targets the future and existence of our people. We demand ending this crime against our people as soon as possible."

The statement attributed the recent tensions between the Peshmerga forces and the Kurdistan Workers fighters to the Turkish interventions, "what is happening today in Başûr (southern Kurdistan) is a Turkish conspiracy. Through the Kurdish-Kurdish fighting, Turkey wants to eliminate the Kurds as a nation and a main force in the region."

The statement continued, "Turkey is not only an enemy of the PKK or Bakur (North Kurdistan), but also an enemy of every Kurd who wants to live in freedom and dignity, and its position on the referendum process in the Kurdistan region is the best proof of that."

"The statements and positions recently stated by Mr. Masrour Barzani place the Kurdish gains in danger and provide a legitimate cover to the Turkish state's attacks on our people in the four parts," it added.

The Democratic Union demanded, "the leadership of Kurdistan Democratic Party to establish a peaceful solution and start a dialogue because there is no point in military methods."

The statement called on "all parties to work to extinguish this fire that will burn us all. The Peshmerga should not be part of the conspiracy against our people."

The Democratic Union Party, a Syrian Kurdish party founded in 2003, is the Syrian wing of the Turkish Kurdistan Workers' Party (PKK) and one of the largest parties leading the Autonomous Administration in northern and eastern Syria.