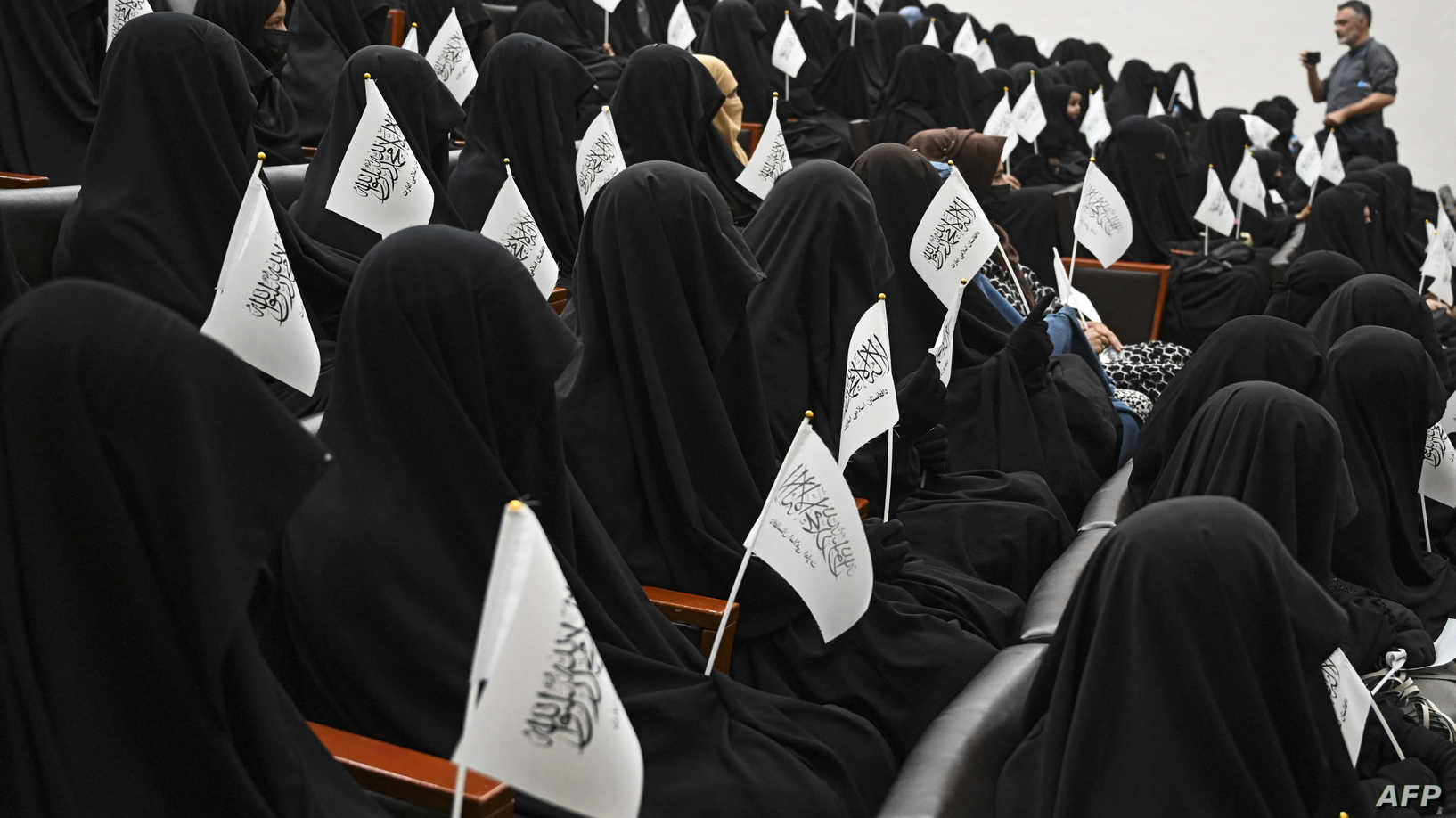 Shafaq News/ Tightening the Taliban’s restrictions on women, the group’s new chancellor for Kabul University announced on Monday that women would be indefinitely banned from the institution either as instructors or students.

“I give you my words as chancellor of Kabul University,” Mohammad Ashraf Ghairat said in a Tweet on Monday. “As long as a real Islamic environment is not provided for all, women will not be allowed to come to universities or work. Islam first.”

The new university policy echoes the Taliban’s first time in power, in the 1990s, when women were only allowed in public if accompanied by a male relative and would be beaten for disobeying, and were kept from school entirely.

Some female staff members, who have worked in relative freedom over the past two decades, pushed back against the new decree, questioning the idea that the Taliban had a monopoly on defining the Islamic faith.

“In this holy place, there was nothing un-Islamic,” one female lecturer said, speaking on condition of anonymity out of fear of reprisal, as did several others interviewed by The New York Times. “Presidents, teachers, engineers and even mullahs are trained here and gifted to society,” she said. “Kabul University is the home to the nation of Afghanistan.”

In the days after the Taliban seized power in August, officials went to pains to insist that this time would be better for women, who would be allowed to study, work and even participate in government.

But none of that has happened. Taliban leaders recently named an all-male cabinet. The new government has also prohibited women from returning to the workplace, citing security concerns, though officials have described that as temporary. (The original Taliban movement did that as well in its early days in 1990s, but never followed up.)

Two weeks ago, the Taliban replaced the president of Kabul University, the country’s premier college, with Mr. Ghairat, a 34-year-old devotee of the movement who has referred to the country’s schools as “centers for prostitution.”

It was another grave blow to an Afghan higher education system that had been buoyed for years by hundreds of millions of dollars in foreign aid, but has been reeling since the group’s return to power.

“There is no hope, the entire higher education system is collapsing,” said Hamid Obaidi, the former spokesman for the Ministry of Higher Education who was also a lecturer at the Journalism School of Kabul University. “Everything was ruined.”

Tens of thousands of public university students are staying home because their schools are closed. The American University in Afghanistan, in which the U.S. invested over $100 million, has been abandoned completely and taken over by the Taliban.

Professors and lecturers from across the country, many of whom were educated overseas, have fled their posts in anticipation of more stringent regulations from the Taliban. In their wake, the government is appointing religious purists, many of whom have minimal academic experience, to head the institutions.

In a symbolic act of resistance, the teachers union of Afghanistan sent a letter last week to the government demanding that it rescind Mr. Ghairat’s appointment. The young chancellor was also criticized on social media for his lack of academic experience. Reached by The Times, some of his classmates described him as an isolated student with extremist views who had problems with female classmates and lecturers.

“I haven’t even started the job yet,” Mr. Ghairat said, rejecting concerns about his appointment in an interview with The Times. “How do they know if I am qualified or not? Let time be the judge,” he said, adding that his 15 years working on cultural affairs for the Taliban made him a perfect candidate for the job.

The Taliban’s chief spokesman, Zabihullah Mujahid, tried to soften Mr. Ghairat’s announcement that women could not return to Kabul University, telling The Times, “It might be his own personal view.” But he would not give any assurances as to when the ban on women would be rescinded, saying that until then the Taliban were working to devise a “safer transportation system and an environment where female students are protected.”

While some women have returned to class at private universities, the country’s public universities remain closed. Even if they reopen, it appears that women will be required to attend segregated classes, with only women as instructors. But with so few female teachers available — and many of them still publicly restricted from working — many women will almost certainly have no classes to attend.

During the country’s civil war in the early 1990s, universities mostly remained closed. When the Taliban took power, in 1996, they brought the civil war mostly to an end but did little to revive their higher education system. Women and girls were prohibited from attending school altogether.

Following the American invasion in 2001, the United State poured more than a billion dollars into expanding and strengthening Afghanistan’s colleges and universities. America’s allies, as well as international institutions like the World Bank, spent heavily as well. By 2021, there were more than 150 institutions of higher education, which educated nearly a half million students — approximately a third of whom were women.

Foreign aid for higher education came to an abrupt halt after the Taliban takeover in August. Money from the United States and its NATO allies ended, as did funding from the World Bank and the International Monetary Fund. That effectively deprived thousands of government workers and teachers of their salaries.

According to estimates by lecturers who spoke with The Times, more than half of the country’s professors have left their jobs. Kabul University has lost a quarter of its faculty, one of the university’s board members said, adding that in some departments, like Spanish and French language, there are no teachers left.

“Kabul University is facing a brain drain,” said Sami Mahdi, a journalist and former lecturer at Kabul University School of Public Policy, who spoke over the phone from Ankara, Turkey. He flew out of the country the day before Kabul fell to the Taliban, he said, but has kept in touch with his students back home. “They are disheartened — especially the girls, because they know that they won’t be able to go back,” he said.

The exodus of intellectual capital is not limited to Kabul University. At the University of Herat, in western Afghanistan, only six out of 15 professors remain in the journalism faculty. Three who fled are hoping to enter the United States from other countries; and six of the absent lecturers were studying abroad before the Taliban returned to power and say that they won’t return. Similar concerns have been reported at Balkh University, in northern Afghanistan, as well. The Taliban replaced school leadership at all those institutions.

Hundreds of professors or students are still trying to get out of Afghanistan. Many have been contacting foreign organizations they were associated with in the past and pleading for sponsorship so they can be evacuated.

In Washington, a senior State Department official signaled increasing irritation with the Taliban on Monday over concerns that people who are deemed at high threat of retaliation — including women who have partnered with American officials or training programs — have not been allowed to freely travel or leave the country. The official said that included about 100 American citizens and legal U.S. residents who have indicated they want to leave, and are waiting in Kabul for a flight out.

The trauma facing Afghanistan’s students was encapsulated in the experience of a 22-year-old Kabul University student who spoke to The Times last week.

In November 2020, with the capital still in the hands of its pro-Western government, gunmen from ISIS walked into a classroom in Kabul University and opened fire, killing 22 of her classmates. After escaping through a window to save her life, she was shot in the hand while running from the building.

She was left traumatized and with chronic pain, but still continued to attend classes. By August, when Taliban soldiers entered Kabul, she was only months away from receiving her degree. But now the Taliban decree appears to have rendered her dream impossible.

“All the hard work I have done so far looks like it is gone,” she said. “I find myself wishing I had died in that attack with my classmates instead of living to see this.”

Taliban gears up to uproot ISIS-K from Kabul and Nangarhar