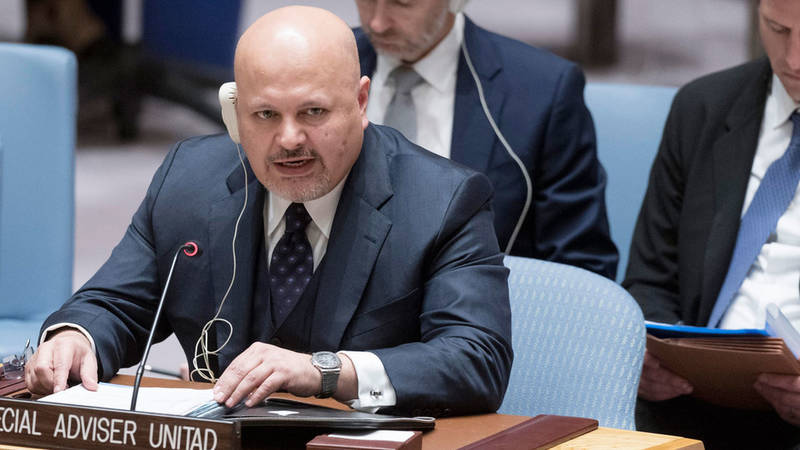 Shafaq News/ A UN team investigating ISIS in Iraq has established what it called a “clear and convincing evidence” of genocide against the Yazidi religious minority,.

In his final briefing to ambassadors, Karim Khan, Special Adviser and Head of the team, known as UNITAD, reported on Monday to the Security Council that investigators have reached a “landmark moment” in their work.

They have finalized initial case briefs on two key priorities: attacks against the Yazidi community in the Sinjar region in northern Iraq, and the mass killing of unarmed cadets and military personnel at Tikrit Air Academy in June 2014.

“I am able to announce that based upon independent and impartial investigations, complying with international standards and UN best practice, there is clear and convincing evidence that the crimes against the Yazidi people clearly constituted genocide,” he said.

Khan recalled that the crimes committed by ISIS, “shocked the conscience of humanity”, as manifested by the group’s ultimatum to convert, or die.

“A full scope of criminality is displayed in the awful criminality of Daesh (ISIS) against the Yazidi community”, he said. “Executions, slavery, sexual slavery, Crimes against children that are horrific, and really chill one’s soul, that how on earth could such things be allowed to happen.  Yet they did.”

UNITAD has supported the return of the remains of more than 100 Yazidis recovered from nine mass grave sites in the village of Kojo.

ISIS’s brutality affected all communities in Iraq, as the incident at the Tikrit Air Academy has also shown. The cadets, mainly Shia Muslims, were led away and many were massacred. An ISIS propaganda video of their murder was clear evidence of the crime of direct and public incitement to commit genocide, according to Mr Khan.

“One doesn’t even need to look into the content of the video, though we’ve done that and we’ve had language experts to analyze it,” he stated. “But it’s by the title of the video that Daesh broadcasted: Kill them wherever you find them.”

Investigations have also revealed ISIS’s “demonstrated capacity” to manufacture and deploy chemical and biological weapons, focused on the group’s takeover of Mosul University, in Iraq’s second city which they occupied until the end of 2017.

According to the UN team, ISIS attracted combatants from the region and abroad. Drawing on the expertise of scientists and medical professionals in its ranks, the group began “weaponizing” chlorine from water treatment plants, testing biological agents on prisoners, and firing 40 mustard gas rockets on the Turkmen Shia town of Tuz Khurmatu.

UN teams in Iraq continues to ensure “no victim, no child of humanity, is left behind”, Khan said, pointing to progress surrounding crimes targeting the Sunni, Shia, Christian and other communities.

He emphasized, however, that it was not sufficient to simply document ISIS’s crimes, and UNITAD continues to support developments towards legislation that will allow for ISIS members to be prosecuted.

“Legislation of course is needed to ensure that Iraq has the legal architecture in place to prosecute this hemorrhage of the human soul: not as common crimes of terrorism, heinous though they are, but as acts of genocide, crimes against humanity and war crimes,” he concluded.