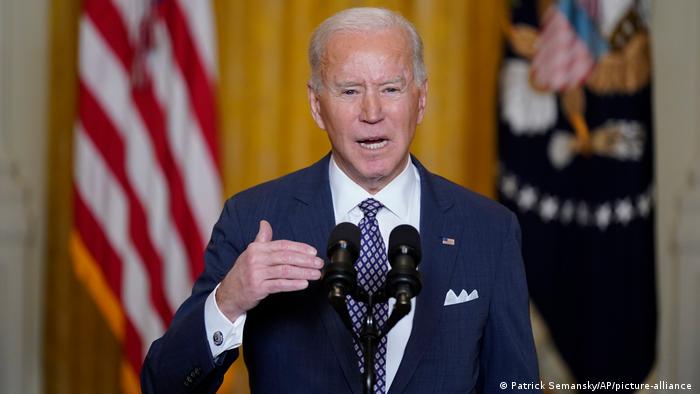 Sending black smoke and flames billowing into the air, and injuring at least five people, the strikes on a fuel depot pierced what had been relative calm in the western hub city that had seen relatively little of the war that has engulfed the nation.

The target hardly seemed coincidental. Biden was 250 miles away, visiting Ukrainian refugees in bitter cold at Poland's national stadium. He heard pleas from young mothers to pray for the men -- husbands, fathers, brothers -- they had left behind.

When he returned to his hotel, aides briefed Biden on the strikes in Lviv. A few hours later on Saturday, propelled by heartache and anger, Biden walked into the courtyard of an old Polish castle to declare the Russian President "cannot remain in power."

The very final words Biden would utter on his last-minute swing through Europe ended up being the most consequential, reverberating widely as Air Force One departed for Washington. They surprised his aides, many of whom spent hours honing the text of a speech viewed by the White House as a significant moment for Biden's presidency. The line Biden uttered wasn't in what they wrote.

Gathered backstage at the castle, White House officials hastily issued a clarification -- one of several on this trip alone -- to say Biden wasn't calling for regime change. But not before the Kremlin issued its own affronted response, saying Russia's ruler is "not to be decided by Mr. Biden."

On Sunday, Biden told reporters he was not calling for regime change in his remarks, responding, "No," to a question shouted from a reporter as he was leaving church in Washington, DC.

The administration had continued to downplay the remarks earlier on Sunday with US Secretary of State Antony Blinken saying from Israel, "I think the President, the White House, made the point last night that, quite simply, President Putin cannot be empowered to wage war or engage in aggression against Ukraine or anyone else."

The series of events that unfolded here Saturday afternoon placed into sharp relief the highly unsettled atmosphere that pervades Europe as Russia's invasion of Ukraine enters its second month. A display of aggression from Putin in the borderlands of Ukraine was followed by an offhand yet forcefully delivered suggestion from Biden that Russians find another leader.

Biden's view of Putin had been growing increasingly dark over the past month, according to officials, and his language has sharpened in describing a "pure thug," "murderous dictator," "war criminal" and, after visiting refugees at the stadium, a "butcher."