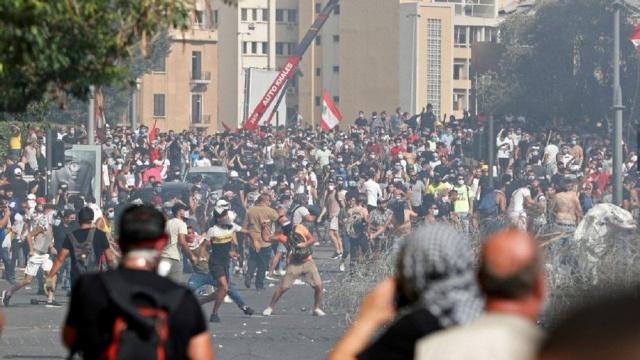 Shafaq News/ yesterday Sunday, clashes renewed between the security forces and demonstrators in the center of the Lebanese capital, Beirut.

The Lebanese National News Agency (NNA) reported that a fire broke out at entrances to parliament square in central Beirut as hundreds of angry anti-government protesters tried to break into the cordoned-off area.

The agency also reported that a clash took place in Martyrs Square (Sahat Al-Shohadaa) in Beirut between the demonstrators and supporters of MP Shamel Roukoz, who arrived to join the protesters and announced his intention to think of resignation from the House of Representatives.

In the same context, The "Lebanon 24" website stated that a number of demonstrators tried to break into a cordoned-off area to reach the Parliament square noting that they used fireworks during the confrontations.

Al-Manar TV, A pro-Hezbollah TV, confirmed the confrontations between the Lebanese security forces and protesters in Nejmeh Square, the site of the parliament.

For its part, the LBCI channel pointed out that Lebanese police fired tear gas to try to disperse rock-throwing protesters.

This came a day after anger boiled over into violent scenes in central Beirut; those protests were the biggest since October when thousands of people took to the streets to demand an end to corruption, bad governance and mismanagement.

About 10,000 people gathered at Martyrs’ Square, which was transformed into a battle zone in the evening between police and protesters who tried to break down a barrier along a road leading to parliament. Some demonstrators stormed government ministries and the Association of Lebanese Banks.

One policeman was killed and the Red Cross said more than 170 people were injured in clashes.