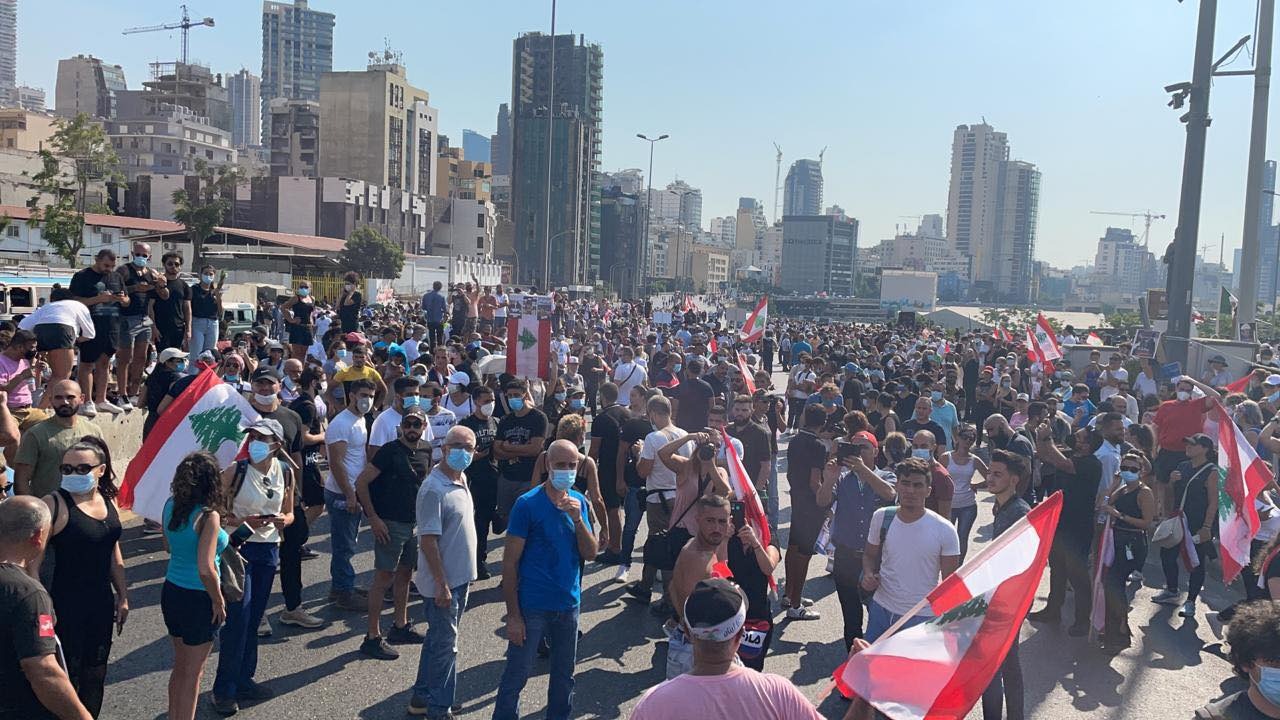 Shafaq News/ Thousands of Lebanese gathered near the port of Beirut on Wednesday to mark the first anniversary of a catastrophic explosion that devastated the city, demanding justice for the victims.

One year since the disaster, caused by a huge quantity of ammonium nitrate stored unsafely at the port for years, no senior official has been held to account, infuriating many Lebanese as their country also endures financial collapse.

One of the biggest non-nuclear explosions ever recorded, the explosion wounded thousands and was felt in Cyprus, more than 240 km (150 miles) away.

An investigation is stalling with requests denied for immunity to be lifted from senior politicians and former officials. All those sought for questioning by the Lebanese investigators have denied any wrongdoing.

"We will not forget and we will not forgive them ever. And if they can't bring them to account, we will by our own hands," said Hiyam al-Bikai, dressed in black and clutching a picture of her son, Ahmad, who was killed when masonry fell on his car.

A huge banner on a building overlooking the port said: "Hostages of a Murderous State."

French President Emmanuel Macron, who has led Western pressure for reform in Lebanon, said its leaders owed the people the truth and heaped new criticism on the governing elite for failing to deal with the economic crisis.

The damage is still visible across much of Beirut. The port resembles a bomb site, its huge wrecked grain silo unrepaired.

Thousands of people, waving Lebanese flags and holding pictures of the dead, had marched towards the port, where prayers are expected to be held just after 6 p.m. (1500 GMT), coinciding with the time of the blast.

A Human Rights Watch report released this week concluded there was strong evidence to suggest some Lebanese officials knew about and tacitly accepted the lethal risks posed by ammonium nitrate.

Reuters reported last August that Prime Minister Hassan Diab and President Michel Aoun were both warned in July last year that the chemicals posed a security risk and could destroy the capital if they exploded.

Aoun has said he is ready to testify if needed, and that he supports an impartial investigation.

Diab, who quit after the blast, has said his conscience is clear.

The chemicals arrived on a Russian-leased cargo ship that made an unscheduled stop in Beirut in 2013. An FBI report seen by Reuters last week estimated around 552 tonnes of ammonium nitrate exploded, less than the 2,754 tonnes that arrived.

That discrepancy is one of the many questions that remain unanswered. No one ever came forward to claim the shipment.

In international conference on Lebanon on Wednesday aims to raise hundreds of millions of dollars in aid to meet the country’s humanitarian needs, one year after the massive explosion at Beirut’s port.

The virtual event, co-hosted by France and the United Nations, is meant to show support for the Lebanese people, French President Emmanuel Macron said.

France will provide 100 millions euros ($118.6 million) in the coming months, Macron said in his opening remarks.

The event is also meant to mount pressure on Lebanese leaders to form a new government able to implement reforms and start rebuilding the country.

Lebanon is going through the worst economic and financial crisis of its modern history, and a political stalemate that has kept the country without a functioning government for a full year.

Lebanese politicians only made the situation” worse by placing their individual and political interests above the Lebanese people’s interests,” Macron said. Since 2018, they have failed to meet “all deadlines” and “all commitments,” he added.

Macron stressed that humanitarian aid promised Wednesday will be unconditional, but he warned that “there will be no blank check to the Lebanese political system because it is defaulting.”

Macron, who went to Beirut twice since the explosion at the port, has led international efforts to try to help the former French protectorate by providing emergency aid. Last year’s conference on Lebanon, organized in the wake of the explosion, raised about 280 million euros ($332 million).

According to the U.N., over half of Lebanese people now live in poverty, one in three Lebanese suffer from food insecurity and nearly 4 million people are at risk of not accessing safe water.