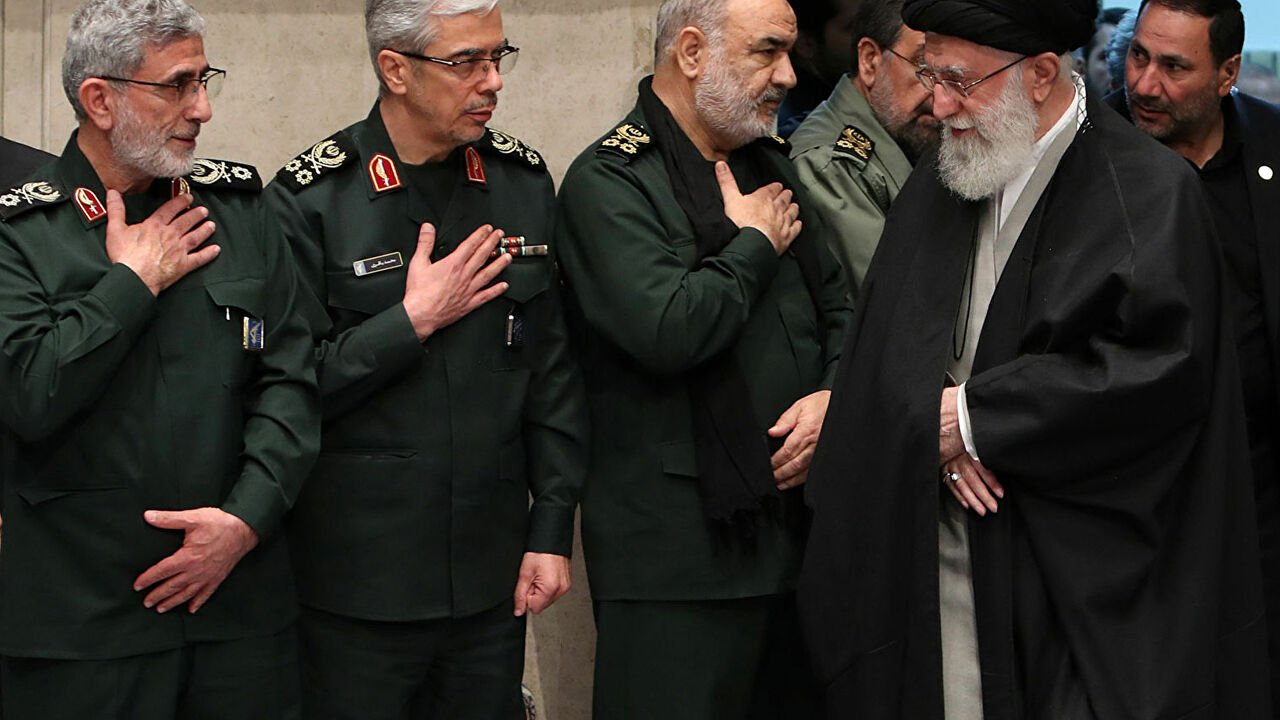 Carrying out an assassination in such a surgical fashion against a moving target without any civilian casualties requires real-time intelligence on the ground.

After the killing, Iran's intelligence minister, Mahmoud Alavi, claimed that two months earlier, he had warned security forces that there was an assassination plot targeting Mr Fakhrizadeh at the exact location where he was shot.

But he indirectly implied the perpetrator was a member of the Islamic Revolution Guard Corps (IRGC), Iran's most elite military unit. If so, the agent would have to have been high up enough in the IRGC to have been able to brush off the warning and carry out the plan at the set date, time and location.

Mohsen Fakhrizadeh is also known to have been a member of the IRGC.

Sources inside Tehran's Evin prison security ward, where those who are accused of spying for foreign countries are held, have told the BBC there have been scores of high-ranking IRGC commanders held there.

The Iranian government does not publicise their names and ranks to avoid tarnishing the reputation of the Revolutionary Guards.

A former intelligence officer for the IRGC Quds Force (its overseas operations arm) has told the BBC foreign agencies have gathered evidence against a number of Iranian ambassadors and IRGC commanders.

He said it includes information about relationships with women, which he said could be used to blackmail those officials to force them to co-operate with foreign spies.

In late January 2018, in the dead of night, a dozen men broke into a storage facility in an industrial district, 20 miles (30km) from the capital, Tehran.

There were 32 safes, but they knew which ones contained the most valuable materials. In less than seven hours, they melted the locks of 27 of them, took half a tonne of clandestine nuclear archives and left without a trace. It was one of the most audacious heists in Iran's history, but officials kept quiet.

Benjamin Netanyahu, the then Israeli prime minister, showcased the stolen material - the result, he said, of a Mossad operation. Iranian officials at the time called the documents fabrications and they said such an incident never took place.

Presenting the archives at a specially convened news conference in April 2018, Mr Netanyahu highlighted Mohsen Fakhrizadeh's role in what he said was an undeclared nuclear weapons programme.

In the past two decades, a number of Iran's most prominent nuclear scientists have been killed. There have been multiple sabotages in Iran's nuclear and military facilities, but so far the Iranian security forces have mainly failed to prevent or capture the assailants and plotters.

In the final year of Mahmoud Ahmadinejad's presidency in 2013, there were rumours that IRGC commanders, intelligence officers and even panegyrists (officials who deliver religious eulogies) had been arrested for spying for the Mossad. But those allegations were never officially confirmed.

One of the accused was the officer in charge of counter-intelligence against Israel in Iran's ministry of intelligence. An Iranian Revolutionary court quietly convicted him, sentenced him to death, and executed him without any publicity.

Only last year, Mr Ahmadinejad confirmed the Mossad had infiltrated his intelligence ministry. He said: "Is it normal that the most senior officer responsible for the control of Israeli spies, responsible for confronting Israeli plots in Iran, himself turned out to be an Israeli agent?"

"I'm against any publicity. If you want to shoot, shoot, don't talk… the Mossad's reputation is to do fantastic operations, allegedly, clandestine, without publicity."

Today, former Iranian officials are concerned that the Mossad has reached officials high up in Iranian security and intelligence institutions.

Ali Yunesi, a former Iranian intelligence minister and top adviser to President Rouhani, issued this warning in an interview: "The Mossad's influence in many parts of the country is so vast that every member of the Iranian leadership should be worried for their lives, for their safety."