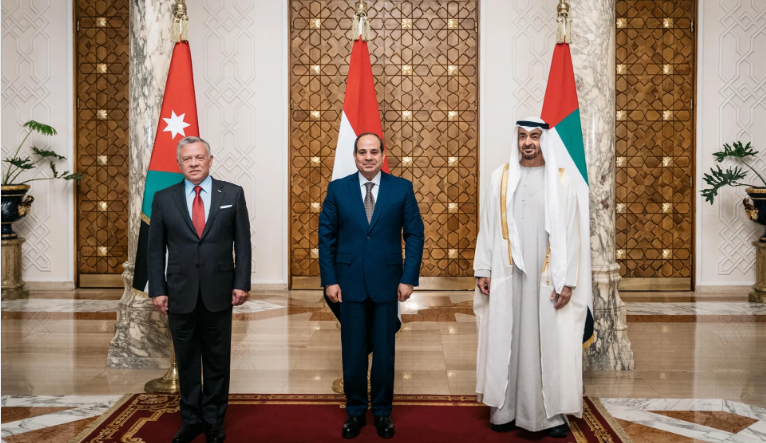 A statement from the Jordanian presidency said that the three leaders discussed trilateral ties, current challenges and crises, as well as bolstering joint Arab action and regional cooperation on food and energy security.

They also discussed the ongoing tensions surrounding al-Aqsa compound, with the three “stressing their countries’ readiness to exert all efforts to restore calm in Jerusalem, end all forms of escalation, and remove obstacles impeding worshippers’ access.”

Israel has faced tensions with its Muslim allies, including diplomatic rebukes by the United Arab Emirates, Jordan, and Turkey in connection to tensions on the Temple Mount.

Israel’s ambassadors to Jordan and the UAE were both summoned for a dressing down last week by their host countries after police entered the flashpoint Al-Aqsa Mosque on the Temple Mount multiple times to quash Palestinian riots.

During Sunday’s meeting, Abdullah also called on Israel to maintain the religious status quo on the compound and “emphasized the importance of respecting the Hashemite Custodianship” of holy sites in the capital. The king also “stressed the need to respect the historical and legal status quo” at the holy site.

Jordan has accused Israel of violating the status quo at the site, under which Muslims are allowed to visit and pray while Jews cannot pray and may only visit during restricted time slots.

Israel insists that it is committed to the status quo and is safeguarding the rights of followers of all three religions in Jerusalem.

The three leaders also urged Israel to “stop all measures that undermine the two-state solution” and to find a way to return to serious negotiations with the Palestinians.