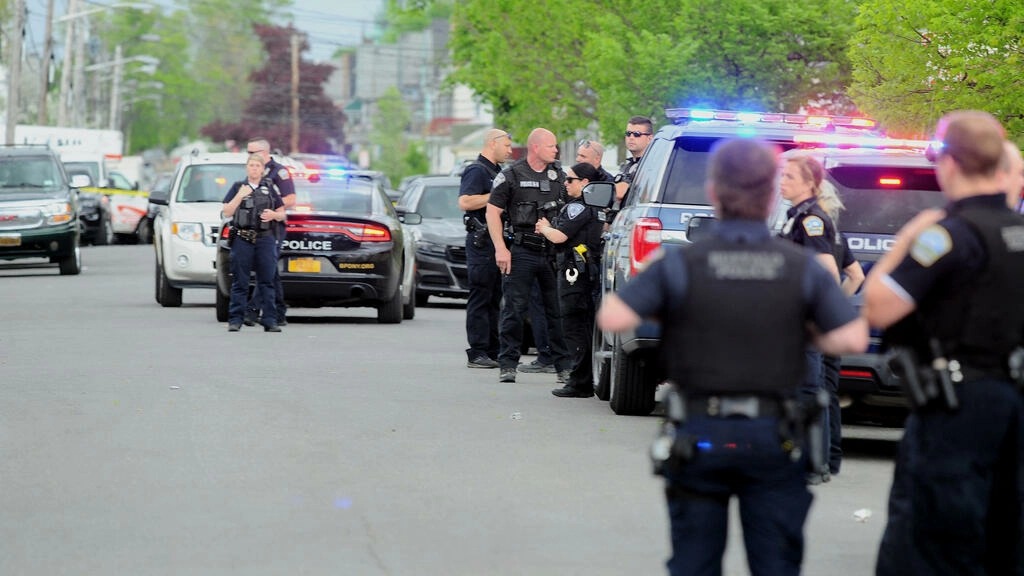 Shafaq News/ For Patricia Horton, a mother of two living in the affluent Chicago neighborhood of Lincoln Park, armed private security patrols are an essential response to worsening violent crime across the United States.

Several groups of city residents have banded together to hire security companies, saying that the police are too under-funded and under-staffed to keep people safe.

President Joe Biden calls gun deaths an "epidemic" in US society, and public fear has been heightened by recent mass shootings -- including last weekend targeting Black customers and staff at a grocery store in Buffalo.

In Chicago, security guards patrol the relatively wealthy and largely white North Side neighborhoods, where violent crime has increased -- though it remains far below that in the predominantly Black South and West Side areas.

"Politicians will continue to blame each other and everything else, including the pandemic," Horton, 44, told AFP while walking her kids home from elementary school.

"All I know is that (private security patrols) can only help, and if I am willing to pay for it, no one can tell me I can't.

"Crime is out of control and the police are either short-handed or just not around. It's really sad that it's necessary."

In the Wicker Park neighborhood of Chicago, for example, one contract for the P4 security company is worth $175,000 a year.

P4 provides patrol vehicles, usually SUVs with cameras inside and outside, manned by armed off-duty and retired police officers who wear flak jackets and drive around the area every few minutes.

But they do not tackle criminals directly, says executive vice president Paul Ohm.

"We're not engaging, we're not chasing," he explained. "We're calling police and giving as much information as we can -- descriptions of individuals, vehicles and events."

"They know the buzzwords so they're going to get a quicker response," from emergency services, Ohm said, while showing video of one employee thwarting a theft gang at a suburban dealership.

Ohm says P4 started providing security for high rise condominiums, but expanded to neighborhoods when real estate brokers spread the word about the company to residents concerned about crime.

P4 sets up a Slack message group for residents to communicate with each other and P4 about suspicious activity -- as well as mundane things like a neighbor who forgot to close their garage door.

Ohm stresses all neighbors are covered by its services, even if they don't pay.

For Jim Higgins, owner of the Club Lucky restaurant in Wicker Park, the patrols are good for the community.

"It's a different type of crime that's going on. These violent carjackings never used to happen, so in that respect it's worse. There's a different spirit out there," he said.

"I think people walking around the neighborhood who see the security cars driving around every 20 minutes or so will have a feeling of comfort."

Wider reaction to the patrols is far more mixed.

A spokesperson for the influential American Civil Liberties Union (ACLU) said "we have concerns because it's difficult to hold them accountable."

"We don't know what type of training they have and if they are profiling people or not," the spokesperson added.

Responding directly to Wicker Park residents hiring private security, Lightfoot said "I need to know more about what their specific plan and scope is, but patrolling streets, responding to crime, that's the job of the Chicago Police Department and they do it effectively."

"We are not going to start, because people can afford it... well, I think I've said enough," Lightfoot said. "There's a slippery slope here."

The issue of private security patrols -- which touches on race, inequality, property and personal safety -- has become subject of fierce political debate in Chicago and elsewhere in the United States.

Ray Lopez, a city council member who is challenging Lightfoot in next year's election, said the growth of private security is a sign of the mayor's failure and creates a "dual society."

"It is absolutely shameful that it has come to this in order for people to feel safe," he said.

So far, 5,800 fully vaccinated people have caught Covid anyway in US, CDC says