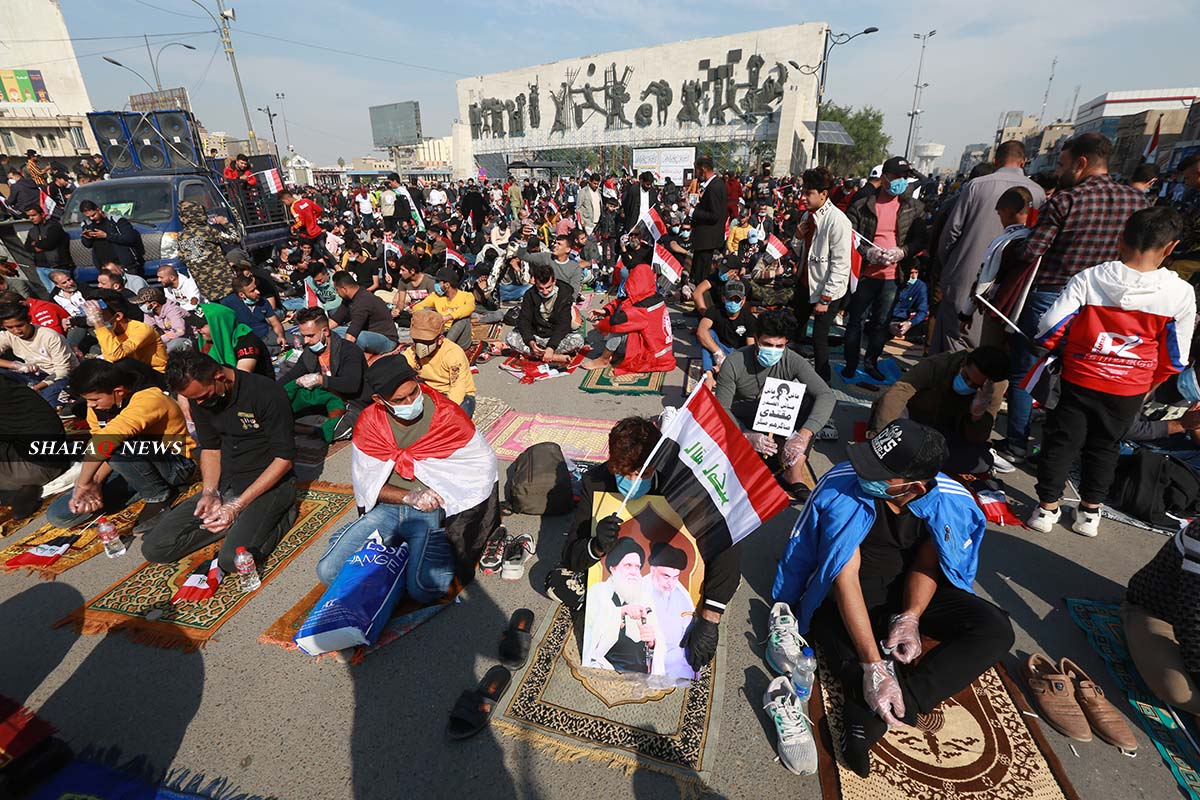 Shafaq News/ Since Sadrist leader, Muqtada Al-Sadr announced his call for the "Shiite house restoration" on December 2nd, and many speculations and questions started taking place in the Iraqi political scene to understand the announcement, and put it in the context of the current political, electoral, and popular game.

According to observers, the most important is the debate around the announcement; away from the media and in the corridors of political parties and forces.. Especially since Al-Sadr called for signing an ideological and political honor code, to confront external and internal challenges.

Questions are many and not limited to the early elections' issue.. But speculation soon centered around the idea that Muqtada Al-Sadr -as usual in launching sudden initiatives and positions, is trying to create the right atmosphere for the Sadrist Movement in the final months leading up to the early elections in June 2021.

"The call for the Shiite house's restoration does not mean forming a political or electoral alliance between the Shiite political forces, nor the revival of the Iraqi National Alliance", Sadrist leader, Hakim Al-Zamili told Shafaq News agency.

Al-Zamili was referring to the coalition that won the 2014 elections. Observers say that the coalition is still coordinating between its forces through ongoing meetings that include representatives of Nouri Al-Maliki, Hadi Al-Amiri, Ammar Al-Hakim, Haider Al-Abadi, and others.

The questions revolve around the call for the restoration of the Shiite house's meaning; while the main forces in this house continue their consultations and coordination meetings on many issues -related to the political process's development and the security situation in Iraq.. they also have meetings between its forces -and between them and the PM as well.

Is it a re-establishment of the Sadrist Movement to restore the Sadrists' popularity –after it was negatively affected by the October demonstrations and Al-Sadr's position regarding it? Al-Zamili's answer denies that, as he said to Shafaq News agency,  "The Sadrist Movement is not seeking to run in the elections in a Shiite political alliance. It wants to run in the next elections alone, and the new law supports individual candidacy".

As for the possible sectarian suspicion in the announcement, Mouin Al-Kazmi, a leader of Badr Organization, told Shafaq News agency, "Badr organization and all the political forces in the Fatah alliance do not want to return to sectarian alliances.. Rather, they want something similar to the Al-Binaa Alliance, as it represents all the Iraqi people away from sectarianism".

At this political moment, it is important to monitor the Shiite leaders' responses to Al-Sadr's call, and whether his idea will turn into a reality that is being implemented. It is clear that some forces –despite welcoming Al-Sadr's invitation, alluded to their tendency towards a broader national alignment, not according to sectarian identity.

Mouin Al-Kazmi was clear in Badr Organization's position on Muqtada Al-Sadr's call, "The Shiite political forces do not intend to re-establish a national alliance, nor to re-form a unified electoral or political alliance by Al-Sadr's invitation to restore the Shiite house. Al-Sadr's announcement was welcomed and supported by many Shiite political forces.. yet so far, there is no real movement on the ground, and no formal discussions between the Shiite forces".

The question remains urgent about the significance of Muqtada Al-Sadr's sudden call.. and whether it is an attempt to highlight and confirm his leadership role in the political scene. Similar to his sudden move in the past two weeks –when he called on his supporters to meet in public squares to pray and protest against the corrupt -only six months before the early elections; in which Al-Sadr hinted at his desire to achieve a parliamentary majority -to nominate the head of the federal government from his movement.

"In each election, all political forces rely on their doctrinal bases.. That is why with every looming election, those forces and their leaders talk about the doctrine, the component, and other slogans", political analyst Ahmed Al-Sharifi told Shafaq News agency.

"The Shiite political forces' alliance exists but is not declared.. These forces unite and meet when the government is formed or ministerial portfolios are distributed, as there are joint committees among all those forces. The new electoral law imposed on all political forces -not just Shiites- to run in the elections alone.. as the choice will be for individuals and not for the lists. But after the announcement of the results, you will see Shiite-Shiite alliances forming again, to form the government according to the partnership –not the majority, and the partnership will be with the rest of the components", Al-Sharifi added.

So perhaps -as other recent initiatives, the announcement is an attempt by Muqtada Al-Sadr to strengthen his leadership image, which he emphasized in the last elections -after his coalition won the largest share of parliamentary seats in 2018. But others also say that Al-Sadr's initiative may be a sincere attempt to restore the Shiite house's image, as it has been damaged after many years of mismanagement and corruption in the Iraqi political-economic life.

It is observable that the statement issued by the Victory Alliance, led by former PM, Haider Al-Abadi, is proceeding cautiously between the caveats and expectations referred to; setting six points for Al-Sadr's "National Code of Honor".

The coalition's statement mentioned, "Based on Muqtada Al-Sadr's call, in line with the demands of reform and change expressed by the courageous October uprising, in the belief that there should be secure commitments to the good of the community and the state, and to ensure the principle of integration between forces, actors, and political and community segments, we call for the start of a systematic movement to adopt a charter of honor as a national principles' framework binding on all Iraqi forces".

Al-Abadi's coalition's statement clarified the nature of this charter is to be, "A national code of honor that includes political commitments to preserve the Iraqi identity, values, and ethics.. as well as guarantee the public order's integrity, good governance, and the performance of political and community forces in the state. This charter's nationality needs to be free from any ethnic or sectarian alignments at the level of community identity, political life, political system, or political fronts and electoral action. With full respect for our society's ethnic and religious diversity".

Kata'ib Hezbollah announced their position of Al-Sadr's call on Sunday. It confirmed its support for him, "Some suspicious parties have deceived our youth and pushed them to adopt manifestations abuse the authentic Islamic values. Political, religious, and social forces have a great responsibility to confront and eradicate those parties".

Muqtada Al-Sadr tweeted on December 2nd, "Amid the clear and real encroachment against God, his religion, his prophet, and his guardians by a group of unconscious and pious boys; trying to discredit the revolutionaries, reform, religion, and doctrine -supported by external and internal evil forces.. I find it an urgent interest to speed up the restoration of the Shiite house through intensive meetings to write a doctrinal and political code of honor.. and an honest, unitary, and corrective approach with neither corrupt nor subordinate".

The first comment on Al-Sadr's tweet came from the Fatah coalition -led by Hadi Al-Amiri- as leader of the coalition, MP Karim Aliwi, told Shafaq News agency, "We welcome the call of the Sadrist leader. There will be political and popular support for it, as it serves Iraq and Iraqis. Iraq and its people are exposed to a foreign-backed plot; carried out by agents inside the country. Confronting this conspiracy requires the unification of political forces with parliamentary and popular influence".

In addition to the calls for demonstrations, Al-Sadr taking back his decision to boycott the elections, the call against the corrupt, and then the call to restore the Shiite house.. It is noticeable that the Sadrist Movement's deputies have also recently strengthened their media activity -to promote the elections and urge the protestors to focus on change through the elections. This is against the backdrop of the prevailing conviction in the Sadrist Movement that the new electoral law will benefit its candidates -given the movement's ability to mobilize its voters in many small constituencies adopted as an idea in the upcoming elections.