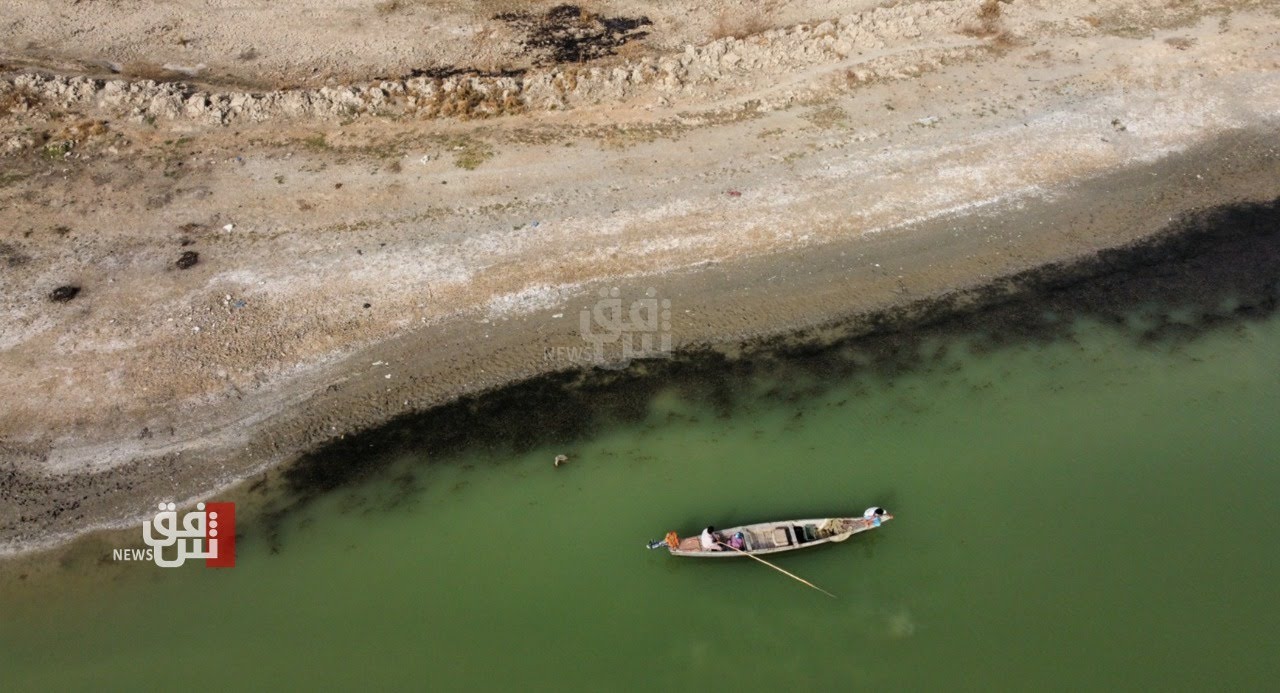 Shafaq News/ As crops wilt and die in Diyala, farmers struck down by a particularly harsh drought this year are ruing the government's failure to upgrade irrigation networks and invest in a long-term agricultural strategy.

Indeed, agricultural households are often particularly vulnerable, as weather shocks can wipe out a large part of their annual income. But this issue is often muted as much of the discussion is focused on the impact of the drought on the government strategies and economics.

Nonetheless, questions remain about which policies can help households adapt to these increasingly risky environments amid the government's failure to provide enough resources to sustain efficient irrigation means.

"Due to water scarcity, my orchards, which sprawl over dozens of dunums, have become nearly empty. The amount of water is barely sufficient to irrigate my watermelon crops. This has cost me much of the income I rely on to support my family and pay my workers," Mohammed al-Tamimi, a farmer, told Shafaq News Agency.

The farmer pilloried the government's almost complete lack of seriousness in addressing this critical issue. "It has neither exerted any pressure on the Iranian side to release our share of running water nor taken any measure to exhibit its willingness to end the people's suffering."

Abu Jalil, a 56-year-old graduate of the Faculty of Agriculture, said that courtesies at the expense of the people’s interests are an unforgivable crime, calling for "the internationalization of the water file and solving it in the same fashion that other countries do."

An advisor to the Ministry of Water Resources, A'oun Dhiyab Abdullah, defended the Ministry's endeavors, blaming strategic issues for making its mission harder.

"The ministry adopts effective strategic plans to secure water for human and agricultural use. However, farms that produce summer crops (fruits and vegetables) consume more water," he said, "the ministry, however, is working on finding solutions to this new situation. The citizen can rest assured that the ministry will secure this season's basic needs of water."

"After Eid al-Fitr, a high-level delegation from Turkey will visit Baghdad to discuss a plan to operate the Turkish dams next summer. Iraq's water releases from those dams from both the Euphrates or the Tigris will be decided during this meeting," Abdullah said.

"The ministry will ramp up its technical measures to combat the drought crisis this year. However, the government, on its part, must push harder in its negotiations with upstream countries and deploy all diplomatic leverages placed under its disposal to secure Iraq's shares from the water of the Tigris and Euphrates rivers."

"Diyala is one of the governorates most affected by the water crisis because it relies primarily on water from the Diyala River and other efferent rivers from Iran," he said, "the water cuts from upstream have taken its toll on the agricultural sector in the governorate. To make it even worse, the governorate did not have a good rain season this year."

"Diyala planted 390,000 dunums of wheat in al-Khas, Khan Bani Saad, Ghalar, and other regions, but the situation in the governorate remains severe, and it might expand to Dhi Qar, Maysan, and Basra," Abdullah stated,

"the ministry plans also account for the environmental aspect. It is working to secure a minimum flow from both rives to push the salt and prevent its expansion into Shatt al-Arab."

Al-Zameli appealed to the caretaker Prime Minister Mustafa al-Kadhimi to establish a "committee to keep tabs and efficiently manage the water crisis at the highest levels, similar to neighboring states," calling for "exerting pressure upon the neighboring countries to increase Iraq's share of water and release them as soon as possible."

"All the countries whose water sources are beyond their borders are experiencing a water crisis, especially if there are no agreements in place between the two sides (upstream and downstream countries). Furthermore, the water crisis is not confined to Iraq. All the nations in the Middle East are affected due to climate change," Mahmoud Saleh al-Khafaji, a professor of water resources management at al-Nahrain University's Faculty of Engineering, stated to Shafaq News agency.

According to al-Khafaji, Iraq suffers from two main problems that have led to water scarcity; the first is drought and climate change, and the second is the lax government management of the crisis.

"Although the Ministry of Water Resources is doing its best to avoid the water crisis, it remains constrained by the lack of political, diplomatic, and public support, in addition to, ofcourse, the lack of funds; all of which do not exist, and if any, it is very negligible."

"The water file needs a real effort at all levels; from the president of the republic to the ordinary citizen who is ignorant of the basics of water conservation and rationalization of consumption."

"The causes of the water crisis are not limited to climate change and the scarcity of rain. Neighboring countries, specifically upstream countries, are working to latch the most of the Tigris and Euphrates waters. They are also using water to extort political gains from Iraq as well."

"The real remedies in this file lie in reactivating agreements with upstream countries (Turkey, Iran, Syria) and ensuring the rights of participating or coastal countries. Iraq shall effectively deploy political, security, and economic pressure cards to snatch its rights."

"The list of solutions includes the construction of the Makhoul Dam and increasing its capacity, allocating sufficient funds to implement strategic projects in the water file, and hindering water wasting by accurately measuring the monthly or daily consumption of each Iraqi family."

The United Nations' envoy to Iraq Jeanine Hennis-Plasschaert predicted that Iraq will face "serious" water scarcity, saying it was "a multiplier of the threat, accompanied by heightened risks of poverty, displacement, instability, and conflict."

From Seoul, Danish expert urges the Iraqis to emulate China's experience for a greener country

What’s Behind Moqtada al-Sadr’s Bid to Shake up Iraq’s Politics?

Iraq's 100th anniversary: A century of coups and transformations

Haaretz: Israel, US discussed moving Palestine refugees out of Lebanon