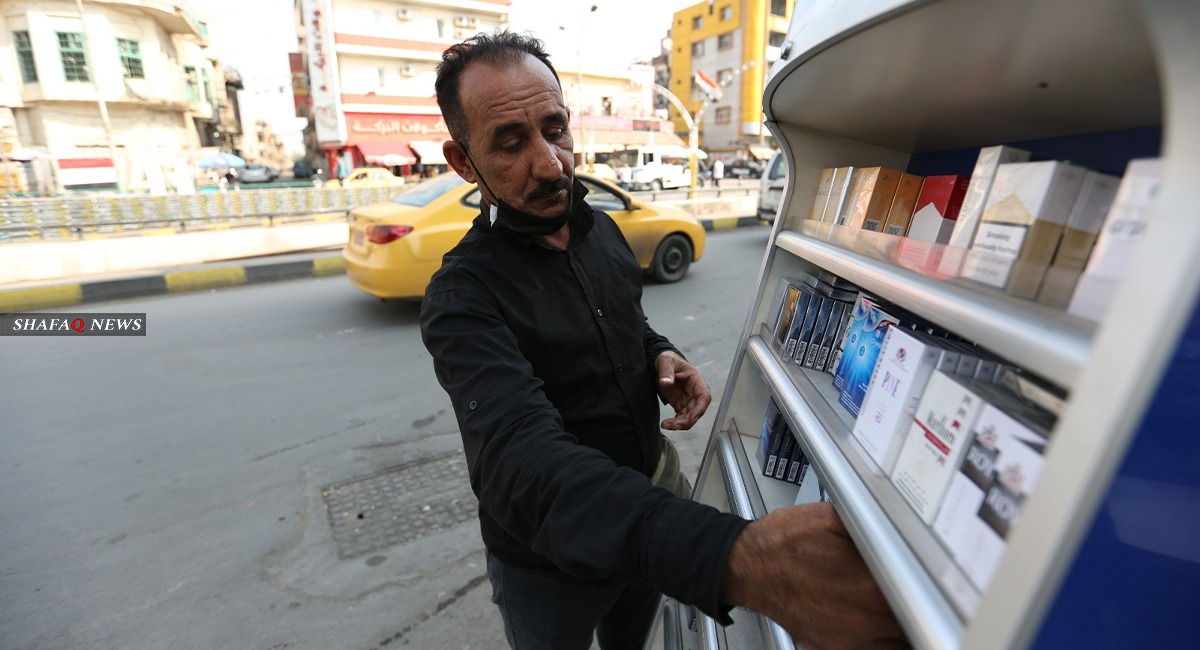 Shafaq News/ The U.S. Chamber of Commerce and its U.S.-Iraq Business Council. Said today, Tuesday, that it stands ready to work with the Biden Administration as it considers the future of the U.S. Relationships with Iraq and Kurdistan region.

"Encouragingly, we understand that both countries plan to resume their strategic dialogue in April," U.S. Chamber of Commerce said.

The report said that U.S. Iraq Business Council (USIBC) "aspires to work with the Biden Administration, as well as leaders in the Government of Iraq and Kurdistan Regional Government, to drive private sector development and diversification, economic and energy independence, and bring about inclusive economic growth for the Iraqi people in order to realize a more stable, sovereign and secure Iraq."

"The COVID-19 pandemic that has not only inflicted a tremendous human toll globally but has also caused acute economic destruction and uncertainty around the world. In Iraq, the pandemic has exacerbated what were already difficult budget, economic and social challenges. The impacts of the pandemic have elevated the necessity for the United States and Iraq to work in partnership and to support Iraq’s economic reform agenda as the centerpiece of this strategy."

The USIBC recommended the U.S. Administration consider the following “4 Big Ideas” to strengthen and advance the U.S.-Iraq strategic partnership.

The U.S.-Iraq Business Council has a long history of working with the U.S. government and private sector and stakeholders in Iraq. We remain dedicated to continuing to work with our partners on the important goal of inclusive economic growth through structural reforms and investment and renew our commitment to this worthy endeavor. The USIBC recommends the U.S. Administration consider the following “4 Big Ideas” to strengthen and advance the U.S.-Iraq strategic partnership.

Given the COVID-19 pandemic has fundamentally reshaped global health discussions and priorities, it is imperative that our governments engage and bring greater focus to health. More specifically, the USIBC and our members in the life sciences sector are eager to help realize the commitments outlined in the 2020 Memorandum of Understanding (MOU) on the procurement and supply of medications and medical supplies, which was signed between the U.S. Ambassador to Iraq, Hon. Matthew Tueller and the Iraqi Ministry of Health’s Director General for Public Health Dr. Riyadh Al-Hilfi.

As outlined in the MOU, a joint committee comprised of both governments should convene a meeting every six months to report on implementation progress.

To formalize this effort, the USIBC recommends establishing the U.S.-Iraq Health Dialogue, under the umbrella of the U.S.-Iraq Strategic Dialogue, to create a forum that can tackle important policy issues in a post-pandemic era. To create a sustainable and resilient recovery, mobilize job creation, and expand access to workforcedevelopment, the U.S.-Iraq Health Dialogue should promote education, trade and health collaboration between our governments, medical facilities and private sector institutions from both countries.

The U.S.-Iraq Health Dialogue would be an ideal platform for implementing a recurring sideline discussion between both governments and private sector stakeholders, which the USIBC would organize in advance of the government-to-government meeting in order to provide timely, on-the-ground feedback from leading healthcare companies. The U.S.-Iraq Health Dialogue should engage the private sector as part of the Dialogue and any existing working groups, subcommittees or task forces that are created to address specific sectors or issues.

To achieve tangible and sustained progress through the U.S.-Iraq Health Dialogue, a high-level working group comprising representatives from both governments, industry, the medical community and professional associations should be created and tasked with identifying priority issues in the health sector. The working group would provide recommendations to both governments on resolving priority health issues.

The USIBC has identified the healthcare sector as a major opportunity for new and deepened collaboration between U.S. companies and stakeholders in Iraq to help improve the country’s healthcare system and the population’s access to medicines, technologies and services.

Having both governments come together with the private sector for a Health Dialogue to significantly enhance cooperation and drive new solutions to the myriad of challenges should be a top priority.

According to the World Bank, gas flaring in Iraq costs the government nearly $2.5 billion in lost revenue and would be sufficient to meet most of the country’s unmet needs for power generation. In addition, development of Iraq’s natural gas resources could help to blossom downstream projects and many other ancillary industries which would be helpful to create new jobs and sustain economic growth.

And, not only is gas flaring depriving Iraq of needed economic benefits and electricity, it is also imposing environmental and health challenges to local communities. The Biden Administration should call for a special meeting of the recently reestablished U.S.-Iraq Energy Joint Coordinating Committee (Energy JCC) to prioritize assisting Iraq with its goal of ending gas flaring and becoming energy independent and developing an action plan, timeline and incremental benchmarks.

In conjunction with government-to-government meetings, it is imperative to ensure the private sector is part of the solution.

To this end, the U.S.-Iraq Business Council will convene a meeting bringing together government decisionmakers and business leaders to discuss reform and investment opportunities.

The Council will establish and maintain an Energy and Environmental Task Force that works in collaboration with partners in both the U.S. and Iraqi governments to carry forward this important work.

In addition to the economic benefits, capturing associated gas and eliminating gas flaring would be a significant contribution by Iraq to the reduction of its greenhouse gas emissions, and underscore Iraq’s intent to ramp up its efforts in this field, which was demonstrated by the fact that its parliament has ratified ascension to The Paris Climate Accord.

Through the Energy JCC, the Biden Administration should also encourage officials in the Government of Iraq (GOI) and the Kurdistan Regional Government (KRG) to work together to improve natural gas resource development.

This includes supporting a comprehensive approach between the GOI and KRG to develop and integrate infrastructure throughout the supply chain, including mid- and downstream infrastructure. Not only does this have the potential to serve as a key area of cooperation between the GOI and the KRG, but it would also help improve the reliability of electricity supply across all of Iraq.

Beyond utilizing the Energy JCC diplomatic platform, the U.S. Government should recalibrate technical assistance programs to support studies on bolstering gas development roadmaps for implementation by the GOI and KRG. For example, the Administration should finalize the Department of Energy’s “Developing the Natural Gas Sector in the Kurdistan Region of Iraq.”

This report details how Iraq can harness its own natural gas resources and the strategic infrastructure required.

To fully realize the economic influence and partnership with Iraq, the Administration should resume financing strategically important natural gas infrastructure and development through the U.S. International Development Finance Corporation, which includes projects in Iraq and the Kurdistan Region of Iraq. This is an imperative if Iraq is to look to the United States and not our competitors for strategic energy investments and to achieve emissions reduction goals. The U.S. Government should also support and establish skills training opportunities for Iraqi stakeholders, including executive education courses at American universities and institutions in order to produce new partnerships that enhance U.S. economic and technical competitiveness in this strategically important market.

Developing a modernized financial services sector is fundamental to bolstering U.S. investment and private sector participation in Iraq and encouraging banking sector reform will have a positive ripple affect across the entire economy. Private sector commercial banks in Iraq should be empowered to play a material role in financing private sector projects that generate employment and economic growth with co-financing from U.S. and other international partners. While state banks are crucial for Iraq’s development, private banks should also play a role in creating credit and taking deposits – particularly for small businesses and individuals. Well-capitalized private banks should be allowed to compete for government contracts and to accept government deposits. As the IMF reported in 2020, “A decisive strategy to reform the large state-owned banks and level the playing field in the financial sector will enable private sector development and secure financial stability.

In addition to strengthening control over these banks’ governance and enhanced supervision, it will be important to perform an international audit of the large state-owned banks to inform options for their restructuring.” Banking reform, if implemented properly, allowing more transparency and traceability in financial transactions, would also help close the window on fraud and corruption. In addition, the Council supports accelerating the development of electronic banking and mobile banking services to increase financial inclusion.

The USIBC recommends the U.S. Treasury Department and Iraqi Ministry of Finance and Central Bank of Iraq, under the umbrella of the U.S.-Iraq Strategic Dialogue, launch a Banking Reform Working Group.

The USIBC will serve as a resource for private sector input and recommendations to the working group. Also, during the World Bank and IMF Spring Meeting in April, the USIBC will partner with the Treasury Department to host a virtual event with Iraq’s Deputy Prime Minister and Minister of Finance and major U.S. banks and financial service companies to discuss advancing the financial sector reforms outlined in the White Paper.

The U.S. Chamber has long championed the strength and ingenuity of U.S. private sector innovation because we know that more than 95% of the world’s customers live outside of the United States. In order to keep our economy and workers competitive in a global economy, we must think creatively about how to bolster U.S. trade and investment ties in emerging markets like Iraq.

As of today, the United States and Iraq do not have a bilateral investment treaty that could ease doing business in Iraq for U.S. companies. While Prime Minister Al-Kadhimi has prioritized economic reform that should deliver results in the long-term, it is vital to try to achieve short- and mid-term progress in order for U.S. companies to engage in economic development opportunities in Iraq. To this end, the establishment of Special Economic Zones (SEZs) in Iraq would create more opportunities for U.S. investment and help increase and diversify U.S. private sector participation in Iraq. SEZs operate and are governed under legal frameworks that supersede pre-established regulatory and bureaucratic constraints in order to create an environment for early success stories. In the case of Iraq, these early successes would create the foundation for new policy instruments that can be scaled up to become an integral part of Iraq’s economic reform and investment strategy, akin to the development of Free Zones in the United Arab Emirates.

Areas such as Basra and Kirkuk are worthy candidates for piloting an SEZ model in Iraq in order to accelerate economic development and encourage broader reforms by realizing early success stories in partnership with the U.S. private sector.

The USIBC recommends that the U.S. Government leverage pre-established platforms for high-level engagement, such as the upcoming multilateral IMF/World Bank Spring Meetings and the next meeting of the U.S.-Iraq Strategic Dialogue, to encourage the Government of Iraq to establish SEZs as an avenue to increase U.S. investment into Iraq. Furthermore, the USIBC recommends that the U.S. Government commit to providing technical expertise, capacity building, and possibly funding to match with the Iraqi Government through the U.S. International Development Finance Corporation. Lastly, the USIBC encourages the U.S. Government to designate a lead agency, such as the U.S. Department of Commerce, to work with the USIBC and private sector to strategically promote opportunities for U.S. companies once the SEZs are established.

What does Iraq look in a post-Sadr era?

Between Iraq and Lebanon, the phenomenon of "life brokers" portends a health disaster

From Iraq to Ukraine, the American Press Loves a War

GIS: al-Sadr’s exit from politics may have been driven by fear of assassination