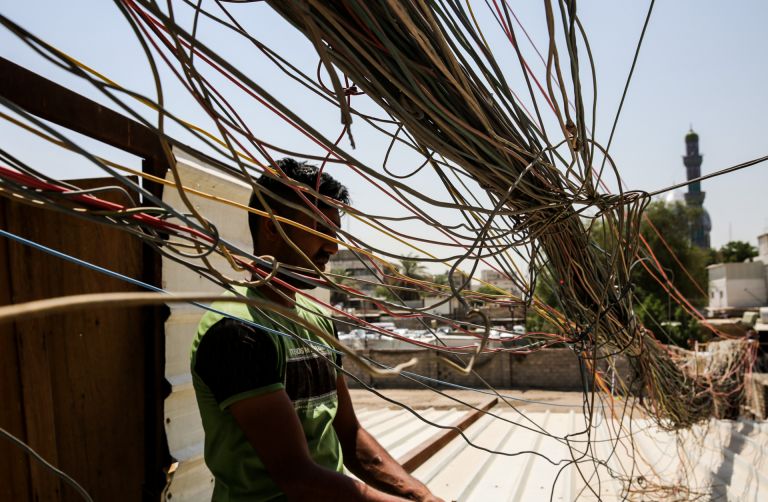 Shafaq News / Iraq's electricity crisis has recently worsened across Al-Anbar, and the level of power supply has dropped to less than two hours per day in some cities.

The crisis has put the population at the mercy of civil generator owners, which has weighed heavily on them due to the ever-rising electricity prices, amid demands for quick solutions to provide electricity.

Despite construction and rehabilitation campaigns in the governorate since its liberation, some cities and villages have only had electricity through a monthly subscription to civil generators.

The cities in which construction has started and the electricity system has been repaired suffer from a significant decline in power supply, which has prompted its officials to demand solutions and put an end to paying hundreds of dinars for four or five ampers that do not even meet the houses' need.

"My salary does not exceed 400,000 dinars as a contract employee of the Ministry of Water Resources, and because of the poor electricity processing, and similar to all the Iraqi people, I pay a monthly subscription price for a civil generator so I can use a fan and watch the news to know what calamities will come to us yet," said Ali Saleh, a resident of Al-Habbaniyah district east of Al-Anbar, "This month I paid 115,000 dinars for only five ampers, and I do not know how to provide for my seven-members family during the rest of the month. So I think I have to find another job to pay electricity wages."

"I get my social welfare salary, 300,000 dinars, every two months, and this month I paid 126,000 dinars to the owner of the generator, whom I already owe 118,000 dinars. So I have only 56,000 dinars left to support my family for the next two months," said Amer Hamdi, a resident from Fallujah district, located 60 kilometers west of Baghdad.

"Rawa district should be given a share of Haditha district's power plant. Likewise, Rawa and Anna districts should be given full shares. Otherwise, it will harm us as local administrations, and that is our only demand," Ali added.

Regarding alternative solutions, Ali said, "In Rawa, we have a 132kv station, and approvals for its rehabilitation have been obtained. As soon as this station enters service, it is expected that we will be self-sufficient with electricity. Therefore, we demand that the rehabilitation procedures be facilitated to eliminate this problem."

As for the solutions that the population demands from the local government in Al-Anbar, Aziz Khalaf Al-Tarmouz, Al-Anbar's governor's energy advisor, said that the question of what solutions must be taken should be addressed to the current minister of electricity and former electricity ministers who have lied to the Iraqi people unchecked, "The Ministry of Electricity is a sovereign ministry in this regard, and it is not possible to install power generator or sign a contract with an investor until the ministry has been consulted, so the ministry must finalize these policies."

He continued, "Civil generators have become a ministry, and we all rely almost entirely on them, so civil generators must be supported because the ministry pledges something new every day without any result."

"We have invited investment companies, received them, negotiated with them, and facilitated their tasks. Very close results will be seen from the installation of solar-powered plants, similar to neighboring countries," Al-Tarmouz concluded.