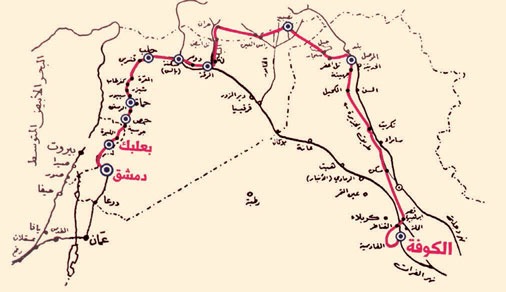 Shafaq News/ An informed source revealed to Shafaq News agency details about a Shiite delegation's journey to search for the "Sabaya Road" in Nineveh.

The trip is part of Shiite parties' broader movement to search for Shiite monuments in Sunni-majority areas.

The Sunni parties claim that these moves aim to create "sectarian strife" in a country that experienced a bloody sectarian war between Shiites and Sunnis.

"The Sabaya" are the children and women of Prophet Muhammad's house, Imam Ali ibn Abi Talib's sons, and the family of his son Imam Hussein. They were taken prisoners after the Karbala incident - in which Imam Hussein, his brothers, and friends were killed - and were forced to walk from Kufa in Iraq to Damascus, the center of the Umayyad Caliphate at the time.

"A delegation from The Holy Shrine of Imam Hussain visited Nineveh on a mission to search for what is known as the Sabaya Road. The field search operation started from the Eski Mosul area west of the city - where an unknown grave - named by the residents as the Bachelor's Tomb - is located", the source told Shafaq News agency.

The source pointed out that the area's residents told the delegation's members that this tomb has existed for hundreds of years, and it likely belongs to Omar Ibn Zain Al-Abidin..but all that is nothing but inherited information with no evidence backing it.

"The delegation continued its search according to its maps and historical sources for three days; starting from Eski Mosul and ending at the Iraqi-Syrian border after passing through the Sinjar district. The delegation is planning to cross the Syrian border in the next phase to complete the search there", the source added.

Two history professors accompanied the delegation at Mosul University; including Dr. Amer Al-Jumaily, a professor at the Faculty of Antiquities, to help the delegation identify routes and provide information. The source pointed out, "The delegation searched through the known old caravan routes, as well as accounts of the hidden roads that were passing through difficult terrain".

"So far, the mission of this delegation is to study the field, gather information, and search for any traces associated with the Sabaya road inside Iraqi territory. The only task now is to search, but if they find graves belonging to Prophet Mohammed's family, it will be built as a shrine in the future", the source elaborated.

The delegation found two routes; one of which is probably the "Sabaya Road" leading to the Turkish Nasibeen region on the Syrian border.. The first road is from Eski Mosul and connected to the Sinjar district, and the second road passes through Rabi'a to the Iraqi border and towards the Nasibeen area as well.

According to Shiite Muslims' accounts, the Sabaya Road did not enter Mosul at the time. There are also accounts of Imam Hussein's head's location in a Christian monastery, without identifying which one in particular.

From Eski Mosul, there are two routes. The first is from Aweinat to Nasibeen, and the second is a road to Tal Afar, then Sinjar, and then to Nasibeen.

According to the source, the delegation was quoted as saying that the Eski Mosul - Tal Afar – Sinjar is the most likely "Sabaya Road".

Last week, the Salvation and Development Front, headed by Osama Al-Nujaifi, called on the government and the Shiite Endowment to halt the search in the liberated areas; saying the activity could "stir up strife" for the time being.

"We have followed with interest the Shiite Endowment and the Holy Shrine of Imam Hussain's activities and tours in some liberated provinces; to search for antiquities and shrines believed to be linked to Prophet Mohammed's family. Out of national responsibility and duty, we believe that such activities provoke sectarian strife and negatively affect the national fabric's cohesion", the front stated.

These developments come amid controversy in recent weeks over an agreement between the Shiite and Sunni Endowments to share the Ministry of Endowments' property under Saddam Hussein's reign.