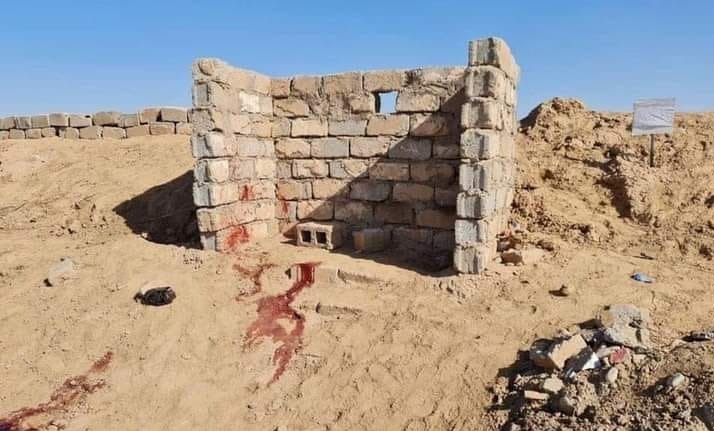 Shafaq News / Even 24-hours later, contradicting accounts continue to cast shadows on what happened in al-A'dhaim on Friday dawn. An Iraqi army barrack was targeted between the Tali'a and Um al-Karamai villages, west of al- -A'dhaim, near the northern borders of Diyala with Saladin.

Shafaq News agency quoted Popular government sources saying that there were multiple and conflicting accounts of the bloody attack that killed 11 soldiers, including a regiment commander, serving as a lieutenant.

A government source in Diyala -who spoke on condition of anonymity- told Shafaq News agency that the stories of the incident were multiple, including lack of fuel and the failure to turn on the generator, which caused the thermal camera to be turned off. The soldiers fought and resisted the terrorists as their bodies were found with military equipment and shields on.

The source added that Diyala's local government demanded starting an urgent investigation to unravel the mysterious circumstances of the incident that raises huge question marks on the small number of soldiers, twelve, in a company, which must, as its nomenclature infers, contain 100 to 150 soldiers.

"One of the attack accounts is that the calls for urgent support made by the soldiers were ignored. The support arrived late after all the soldiers were shot dead and their weapons, equipment, and the tens of millions of dinars worth thermographic camera, were looted," the source continued.

Residents and eyewitnesses from Um al-Karamai, 4 km from the incident, revealed vague details to Shafaq News agency that ISIS terrorists easily infiltrated the barrack, carried out mass executions of army personnel, and placed their military equipment and shields on their military uniforms.

Residents called on security leaders to reveal the facts and details of the attack and how it was carried out so quickly, as it is the deadliest attack since 2014 to date.

They also called on the intelligence services to thoroughly investigate the involvement of cells that are potentially complicit with ISIS and warned them to leave the barrack right before the late arrival of the military vehicles.

In a statement to Shafaq News agency, security expert Fouad al-Bayati raised question marks about the presence of only 12 members of the First Company - the 2nd Regiment of the Iraqi Army's 1st Division – in an area that is considered a perilous engagement point that requires heavy enforcements to cover it.

Al-Bayati called on the security leaders and the General Command of the armed forces to reveal the reality of the number of security units in Diyala's vicinity and address the rampant ghost personnel phenomenon in many security formations.

ISIS broadcast videos of the attack, the break-in of the barrack, and the firing of mercy bullets at the wounded soldiers, meanwhile screaming chanting the calls of "Allahu Akbar!".

The video showed vehicles carrying more than 10 ISIS militants breaking into the barrack after most of its members were killed with sniper weapons from three axes.

Diyala's governor Muthana al-Tamimi, speaking to the state-run news agency, attributed the causes of the attack to the neglect of the soldiers in carrying out their duty because the headquarters is fully fortified and contains thermographic cameras, night vision scopes, and a concrete observation tower. Apparently, the terrorists took advantage of the cold weather and the soldiers' neglected duty and carried out their crime, then withdrew to Saladin.

The governor called for ramping up the security measures along the 65 kilometer-long borders between Diyala and Saladin to halt the infiltration of the terrorists.

ISIS launched an attack on the headquarters of the First Company - the first regiment of the Iraqi Army's 1st Division on the outskirts of um al-Karamai village west of the Al-A'dhaim district, 60 km northeast of Baquba, killing 11 Iraqi soldiers, including an officer, destroying the thermographic camera and seizing military weapons and equipment.