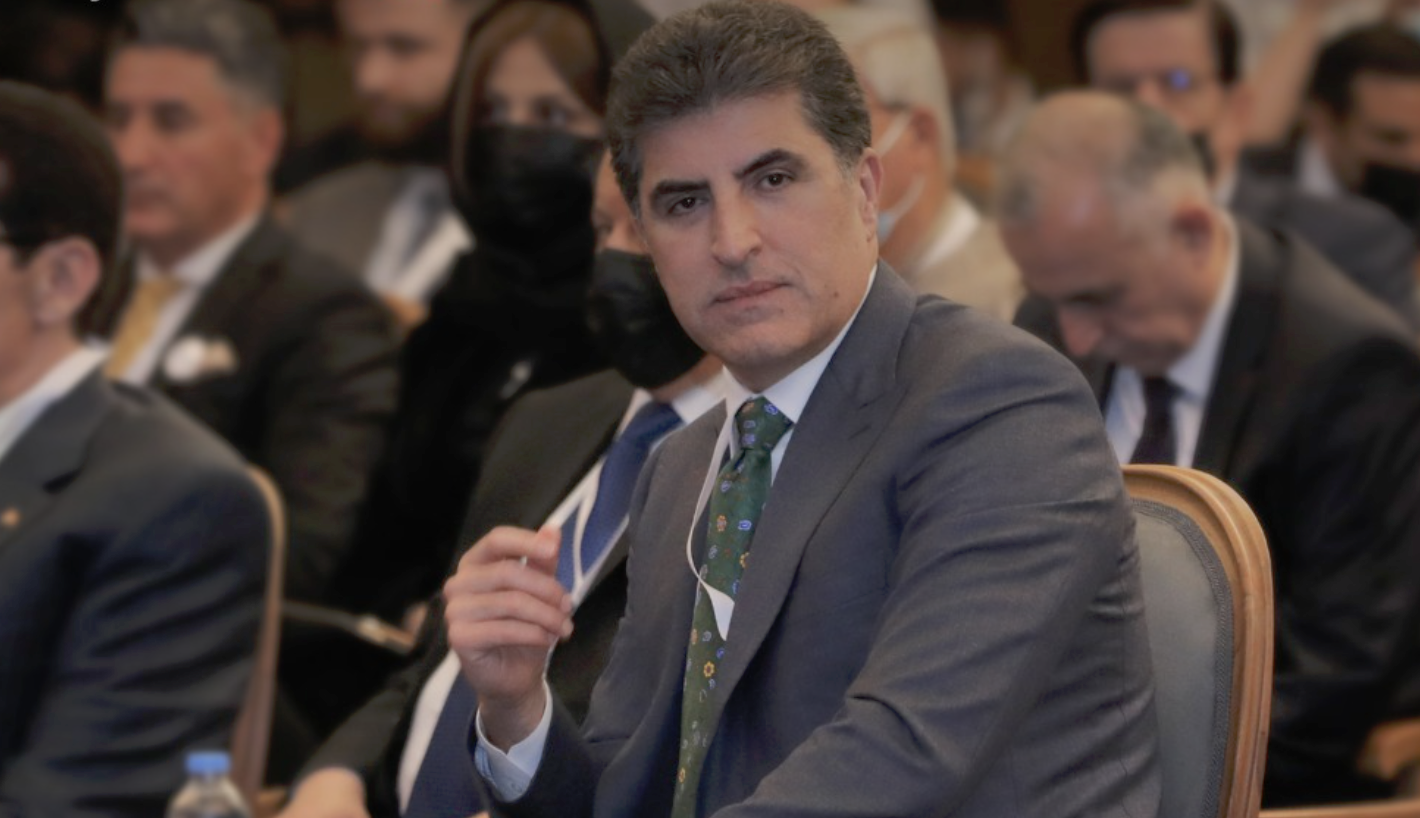 Shafaq News/ If the first year of Nechirvan Barzani's mandate was a test for his ability to succeed as Kurdistan’s prime authority; the second is a year of validation. A validation that the momentous task entrusted to this man is in safe hands and that the former president of the Kurdistan Region, Masoud Barzani, was right to give his unconditional support to Nechirvan as his successor.

They were two years full of challenges and difficulties, but also perseverance and great hope. Nechirvan Barzani modus operandi is a simple balancing act: “Iraq's crises cannot be resolved in a battle for the survival of the fittest."

Neither the storms of Iraq have soothed nor the difficulties of the Region are waived. Still, Nechirvan Barzani, with his usual poise and sensibility, has always sought the opportunities behind the crises and worked to resolve Iraq's problems via dialogue and negotiation.

The events that took place in the past two years are proof that President Barzani always adopts a positive stance, even when the relations with Baghdad are strained. He always seeks rapprochement, compromises, and solutions, taking advantage of three decades of progressive political work that paved his way to the highest position of power in Kurdistan and making him a very likely candidate for the presidency of Iraq. His accumulated expertise enabled him to remain steadfast in the most difficult situations.

Significant turmoils and countless risks have emerged, and that could have plunged the political life of any government or president in vain, but Nechirvan Barzani was at the level of the challenge every single time. Back in 2014, when oil prices collapsed, ISIS emerged and occupied Iraqi and Kurdish cities, the federal government cut off Kurdistan's budget due to disagreements over oil sales, and hundreds of thousands of displaced people poured into the Region. Nechirvan Barzani spared the region and the government from a huge catastrophe.

Despite several shortcomings, the Erbil-Baghdad relationship appears to be stable in the then Prime Minister Barzani's era, now the regional president, he successfully established a positive dialogue with Mustafa al-Kadhimi, whether through his positions on relations on the Erbil-Baghdad highway or through his multiple visits to the federal capital to bridge any rift that arises such as the problem of salaries and wages, disagreement over the federal budget, the revival of ISIS sleeper terrorist cells, security gaps in the so-called disputed areas, the COVID-19 pandemic and its health and economic implications, or even when the Region's security was hampered by rocket attacks on Erbil airport.

Nechirvan Barzani is always concerned for Baghdad as its prestige and well-being, and that of Kurdistan are intertwined. For this reason, whenever he visits Baghdad, not only he meets the three presidents, the president of the republic, the prime minister, and the speaker of parliament – but also the leaders and representatives of parliamentary blocs, as part of his intensive efforts to overcome differences and an extend outreaches between Baghdad and Erbil.

President Barzani, as he did in March, was quick to heed al-Kadhimi’s call to hold a national dialogue to lay a national roadmap and devise radical solutions to the problems between the Kurdistan Region and the federal government.

Dilshad Shahab, a presidential adviser in the Kurdistan Region, stated to Shafaq News Agency , "According to the law, the Region’s president is responsible for regulating relations with Iraq and abroad. Consequently, President Barzani has visited the Iraqi presidencies as well as the political actors as he believes that any improvement in the Erbil-Baghdad relations will have a positive impact on the Region. Currently, the president's relations with all Iraqi presidencies are good. That contributed to overcoming obstacles between the two parties and moving towards convergence, while preserving the Kurdistan Region’s rights. That is why I am confident that these parties will commend Nechirvan Barzani’s role."

In Kurdistan, it is not unusual to see President Barzani tour the Parties’ headquarters, as he did a few weeks ago, in an effort to keep the same distance from everyone, considering that Kurdistan’s presidency is the Kurdish house that assembles all – to coordinate visions, unite concerns and solutions, and share his vision for the future that is bleak to many, but to President Barzani views it as a motive for action.

According to Dilshad Shahab, “President Nechirvan Barzani believes that the unification of the Kurdish house is the key to success and the guarantee of the Kurdistan Region’s bright future. President Barzani has stuck to the political plan that he adopted two years ago when he assumed the presidency of the Region; he took responsibility for a people that made great sacrifices and worked hard at making the Region a better place for future generations. From this perspective and through his struggle, it was made clear that whenever the Kurdish house is United, great feats were accomplished, starting from the Kurdish front to the revolution, and not ending at all the events that followed. On the contrary, every conflict inside the Kurdish house had negative repercussions that spared no one.”

Dilshad continued, "President Barzani aimed to ameliorate the Kurdish parties' relations; he never hesitated to call meetings either at the Region’s presidential residence or through contacting directly or visiting the Kurdish leaders. Recently, and despite the numerous differences, he visited all the Kurdish parties to create a necessary environment for the unification of the discourse on the general guidelines."

Nechirvan Barzani had announced on May 19 that the regional presidency will begin taking practical steps to draft a constitution for the Kurdistan Region, in cooperation with the regional parliament.

Kurdistan’s president’s energy and activity are not limited to Kurdish and Iraqi internal affairs. During the second year of his presidency, he was considerably active in foreign affairs; he visited the Elysee Palace in Paris, where President Emmanuel Macron received him. This visit was Barzani's third to France during Macron's era. He met President Recep Tayyip Erdogan in Ankara in September 2020, one day after convening with Macron in Baghdad. He also attended the Davos Conference in January 2020, where he met with the then-U.S. President Donald Trump, and received Pope Francis during the latter's visit to Iraq and Kurdistan last March and held a private meeting with him, during which he stressed the Kurdistan Region's commitment to coexistence and peace.

Even in the regional-external dimension of crises and events, Barzani was present. For example, when Kurdistan was attacked by the Iranian and Turkish artillery, and for that - and other reasons at the time - he went to meet al-Kadhimi to discuss the matter. Nechirvan Barzani also contributed to securing Kurdish participation in the U.S.-Iraqi strategic dialogue with all its files on the entire region's future.

Shahab said on President Barzani’s external relations, "We all can remember when in the recent past everyone turned their back on us, especially the federal government, and diplomatic,economic, and military blockades were imposed on the Kurdistan Region. Back then, only Nechirvan Barzani was able to dismantle closed doors, and all of Kurdistan’s people know this and remember when he went to the Elysee Palace and warmed the frosted relations. From that day on, he continued his attempts to strengthen relations with international parties. The improvement in the Kurdish external relations is significantly due to Barzani’s clear vision to get closer to the international community and establish the best relations with it."

"I can say that the good international diplomatic engagement with the Kurdistan Region, if we evaluate it from a federal point of view, is great, and they deal with Nechirvan Barzani as the head of a state. This is due to his great role that turned the world’s eyes towards the Region and its president," Shahab added.

In a television interview last April, Nechirvan Barzani spoke transparently about much of what was on his mind, revealing important aspects of his personality and way of thinking. For example, his uncle, former President of Kurdistan Masoud Barzani, was Nechirvan’s inspiration and mentor as a leader, uncle, and father, he learned to fight for the rights of the people and serve the nation from leader Malla Mustafa Barzani, and that he learned from his father, Idris Barzani, to work for rapprochement between the Kurdish and Arabs.

He said, "Iraq's problems cannot be solved by the criterion of who is strong and who is weak. Iraq's problems cannot be solved unless we get rid of the miserable mentality that if Baghdad is strong, it means weakness for Erbil, and vice versa. We complete each other and the development of any Iraqi city is considered development for Kurdistan, and the growing strength of the Iraqi economy adds strength to the Kurdistan Region, not the other way around."

It is rare to find a leader in Iraq or the region who has such comprehensive and profound visions in diagnosing and understanding the scene and thus managing it.

"If the situation is somewhat appropriate, Kurdistan’s president's dreams for Region’s future are bigger than what you feel or what has been achieved," Dilshad Shahab said, "Another point to Nechirvan Barzani's score, and vindicated by the communities, is that they feel reassured by Nechirvan Barzani’s character.”