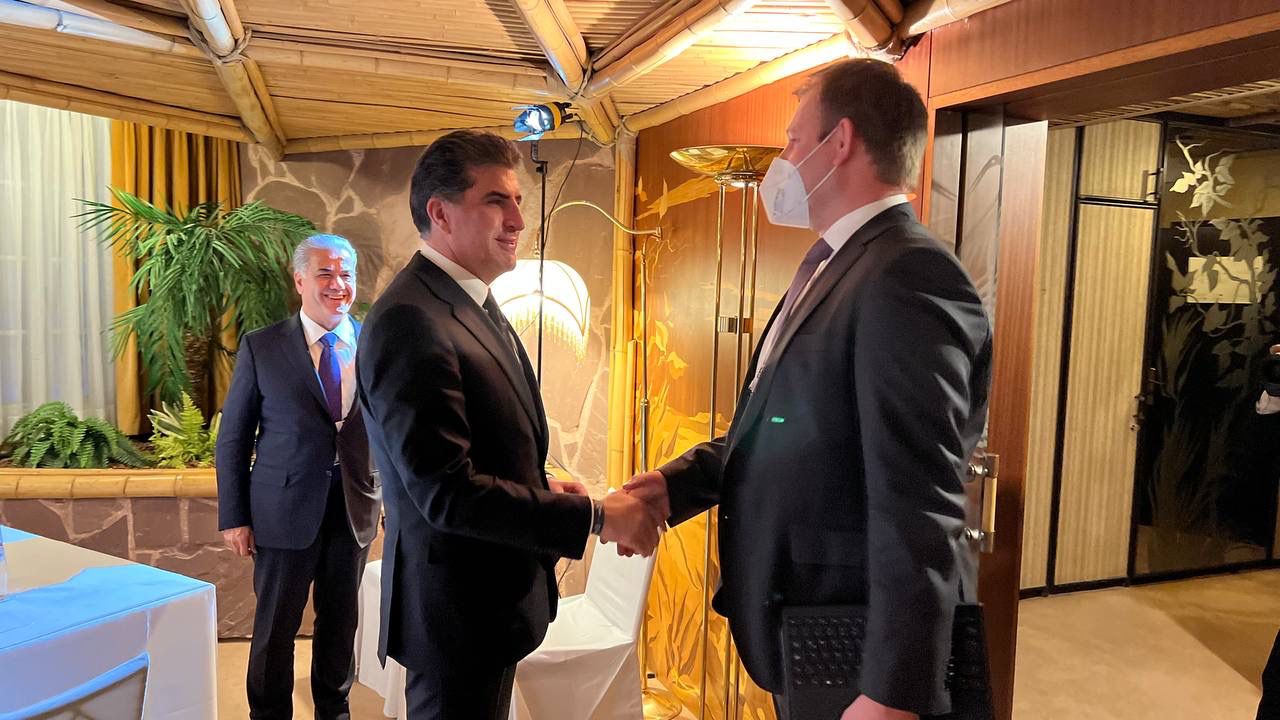 Shafaq News/ It is unusual during a convention of the world's political and security elite for a politician to engage in countless meetings with leaders and officials from all around the globe, and tackle a spectrum of issues as wide and deep as the President of the Kurdistan Region, Nechirvan Barzani, did in.

According to the region's presidency, President Barzani arrived in Germany on Thursday for the Munich Security Conference (MSC), which runs from February 18 to 20. Since then, he has held a series of 13 meetings with senior officials on Saturday alone, demonstrating an unparalleled level of agility that none of the Iraqi figures that participated in the meeting throughout the past two decades have shown.

The Munich Security Conference (MSC) is the world's leading forum for debating international security policy. It's a venue for diplomatic initiatives to address the world's most pressing security concerns, bringing together heads of state and government, ministers, leading figures of international and non-governmental organizations, as well as high-profile representatives of industry, media, academia, and civil society. In addition to its annual flagship conference in Munich, the MSC regularly convenes distinguished events on particular topics and regions.

Holding more than 20 meetings in merely two days, reflects, according to observers, the agility and activity of the President of the Kurdistan Region, the skills his team of assistants has for successfully organizing and scheduling those intensive and successive meetings, as well as the weight and importance Kurdistan and its President enjoys at the international level.

According to the Bureau of Kurdistan's President, the first meeting of Nechirvan Barzani on Friday began at 9 a.m. and then continued his marathon with various officials successively until 7 p.m..

The office added that 13 meetings were held by the President in just a single day, without taking into account the meetings that took place on Saturday so far, knowing that the conference continues until Sunday.

The Munich conference, which has of course been dominated by the military tension between Russia and Ukraine, contemplated an array of issues that are major points of contention in the political arena, including global leadership, nuclear weapons, military tensions around the world, cybersecurity, terrorism, the climate crisis, and its impact on conflicts, as well as the Middle East crises.

With such an active role played by Barzani at the conference, he has established a notable presence for himself and the Kurdistan Region in the most prestigious political and security platform. That is not only represented by direct bilateral meetings, but also in informal consultations in conference rooms, halls, and closed rooms, allowing the parties to get to know each other, and raise their issues with great goodwill and openness, which directly help to settle matters and dispel any differences.

In addition to the meetings, the issues raised during Barzani's extensive meetings included a broad spectrum of issues. For example, with Guterres, an update on the political situation, and the Iraqi situation in general, was presented.

They both also expressed their hope that the United Nations would continue their support to address the problems in Iraq.

The meeting also addressed the fight against terrorism as well as threats and dangers of ISIS, and both sides noted that ISIS continues to threaten security and stability in Iraq and Syria.

He also addressed the importance of coordination between Erbil and Baghdad in combating terrorism, the need to coordinate efforts to achieve security and stability in Iraq, and the role of the United Nations in this regard. He also discussed the possibility of Guterres' visit to Iraq after forming the new federal government.

As for the Deputy Prime Minister and The Foreign Minister of Qatar, ways to advance relations between the Region and Qatar in various areas were discussed, as well as expanding the horizons of joint cooperation, the latest developments in the political process in Iraq, the efforts to form the new federal government, security conditions, and threats from ISIS.

Barzani's talks with the Qatari official touched on Kurdistan's relations with neighboring countries and countries in the region, the latest developments in the Syrian situation, Qatar's role in the region, as well as the situation in Afghanistan.

With Mikati, the Prime Minister of Lebanon, the issues discussed included the situation in Iraq, the political process, the latest developments in the Lebanese political, security, and economic situation, and Lebanon's relations with Iraq and Kurdistan.

Nechirvan Barzani expressed the region's desire to strengthen relations with Lebanon, referring to the presence and activities of the Lebanese community in the Kurdistan Region, which is active in many areas.

At the end of the meeting, Mikati officially invited Barzani to visit Lebanon.

In his meeting with the spokesman for the Foreign Affairs Committee of the German Parliament, Barzani discussed the political situation in Iraq, the issue of immigration and the situation of migrants on the Belarusian border, the threats of ISIS, the extension of the mandate of German forces in Iraq, the displaced Yazidis, the promotion of democracy, and the building and development of institutions in Iraq and Kurdistan.

During a meeting with German Minister of State for Foreign Affairs Tobias Lindner, the German official told Barzani that his country is ready to continue military support, assistance, and training for the Kurdistan Region and Iraq, while the President of the Region, commenting on the recent decision of the Iraqi Federal Supreme Court on Kurdistan's oil and gas law, said that Kurdistan would always work to solve problems per the constitution.

Italian Defense Minister Lorenzo Guerini told Barzani that his country's experience with the Peshmerga was good and successful, while the regional President thanked him for Italian military assistance during the ISIS war.

During Barzani's meeting with Vatican Foreign Minister Paul Richard Gallagher, political and security developments that took place in Iraq were discussed, as well as the conditions of components, bilateral relations, the recent visit of the Supreme Pontiff to Iraq and the Kurdistan Region, the situation of displaced persons and refugees in the region, and the situation in the Nineveh plains and Sinjar.

The two sides also stressed the importance of strengthening relations, protecting and deepening the culture of coexistence, tolerance, and acceptance between religious and national components, and religious freedom. They also praised the countries that helped Yazidis and Christians after ISIS attacks.

Barzani was keen to explain to the Vatican official that Kurdistan will continue to support the components, especially Christians and Yazidis, and maintain a culture of coexistence.

With European Commission Vice President Marguerite Schinas, the situation in Iraq, the election process, and the steps of the political process were discussed.

They stressed the importance of dialogue in order to solve Iraq's problems, and the European official said that they are watching with interest the situation in Iraq and Kurdistan and see that there is an opportunity for Iraq to regain its strength and fight terrorism through democracy to achieve peace and stability.

It was also talked about that the Europeans are ready to cooperate and consider Iraq and Kurdistan as partners, thanking the cooperation of Kurdistan with the European Union.

On the other hand, Barzani stressed the importance of Europe's support for Iraq so the latter can solve its problems, as it will lead to political stability. Furthermore, the President urged the European Union to pursue a comprehensive approach towards Iraq and the Kurdistan Region.

The Munich conference is usually attended by dozens of officials, ministers, deputies, as well as hundreds of experts and security chiefs. According to the German website Deutsche Welle, its notion began in 1963 under the name of the "International Military Science Meetings". The name was later changed to the "International Military Science Conference".