MEE: Saudi-Turkish reconciliation is a cause for concern in Iran 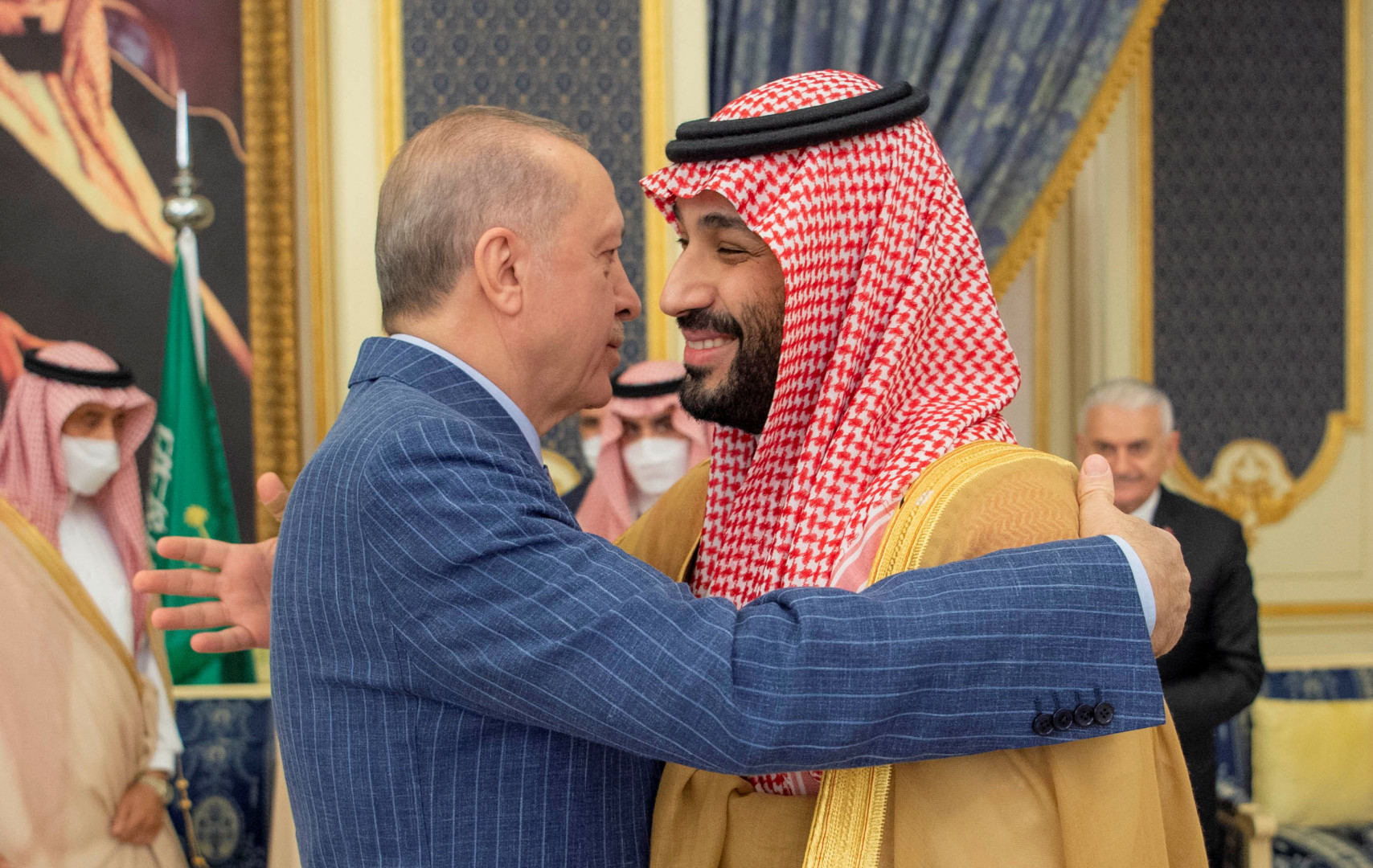 Shafaq News/ Following a year of intense diplomatic efforts to normalise relations and turn over a new leaf, relations between Turkey and Saudi Arabia seem to have warmed following the two-day visit of Turkish President Recep Tayyip Erdogan to Riyadh on 28 April.

The visit attracted a lot of attention, as Erdogan and Saudi Crown Prince Mohammed bin Salman were seen shaking hands and embracing each other.

Mainstream analysts and media overemphasised the economic factors in this reconciliation at the expense of the geopolitical and regional security conditions, which traditionally have the upper hand in shaping the relations between Riyadh and Ankara.

The regional policies of Iran and the US occupy a unique position in these dynamics.

Asserting the geopolitical and security factors, the general feeling in neighbouring Iran was against reconciliation between Saudi Arabia and Turkey.

From an Iranian perspective, reconciliation between these two regional powers might negatively impact Tehran’s influence, particularly in Syria, Iraq and Yemen. Moreover, it might empower Saudi Arabia in its negotiations with Iran on regional issues, thus undermining Tehran’s quest to force Riyadh to agree on concessions.

Some Iranian analysts perceived the reconciliations as part of US efforts to bring its allies closer to each other. According to this point of view, the end game is to enable the allies of the US to counter Iran, Russia and China following the possible departure of US forces from the region.

In a trenchant opinion piece on Erdogan’s visit to Saudi Arabia, Hadi Mohammadi criticised the three countries, with a special focus on Ankara’s role in Iraq and Syria.

Contrary to the apparent de-escalation between Saudi Arabia and Iran, tensions have been mounting recently against the backdrop of the role of pro-IRGC militias in Iraq and Syria.

Rapprochement between Riyadh and Ankara would likely augment their collective influence in Iraqi politics, provided that Turkey and Saudi Arabia find ways to accommodate their respective interests and sustain a measure of coordination.

In February 2021, Iran’s ambassador to Baghdad, Iraj Masjedi, expressed Tehran’s misgivings about Turkish influence in Iraq, and called for the withdrawal of Turkish forces from Iraqi territory.

Turkey’s TB2 combat drones reportedly responded by targeting the PMUs within Iraqi territory. The current dynamics of Turkish-Iranian rivalry have the potential to evolve into a low-intensity proxy conflict in Iraq.

The Iranians are worried that the Turkish-Saudi reconciliation has the potential to attract more countries to a unified regional agenda. Some of them even think that Ankara has the ability to incorporate Israel in such efforts, which will turn Iran into a primary target.

The prospect of a similar reconciliation process between Turkey and Israel contributes to the prevailing apprehension in Iran. This explains the restless efforts of Iranian intelligence to sabotage Turkish-Israeli cooperation by trying to assassinate Israeli businessmen and diplomats in Istanbul.

Syria is another theatre where the reconciliation between Turkey and Saudi Arabia might further jeopardise Iran’s position and influence, particularly following the Russian quagmire in Ukraine.

In the last few years, there has been an implicit convergence of interests between Turkey and Israel in relation to countering Iran’s influence in Syria. Israel has conducted more than a thousand air strikes against Iranian targets in Syria; Turkey never criticised these attacks.

Last week, Erdogan revealed a plan to build new projects inside the Turkish-controlled areas of northern Syria that would allow the return of around one million Syria refugees. It is believed that the Arab Gulf counties, including Saudi Arabia, might have a role to play here.

Furthermore, drying up the financial resources of the Kurdish militias, the YPG and PKK, in Iraq and Syria will further empower Ankara in Syria and deprive Iran of a proxy force.

Additionally, in a noticeably strong move, Ankara called the pro-Iran militias in Syria via the Persian edition of its semi-official news agency, “pro-Iran terrorists”.

Ties between Riyadh and Tehran have endured a seemingly relentless struggle, especially after the severance of diplomatic relations in 2016. The two sides have taken opposing positions in virtually all regional disputes.

Policymakers in Saudi Arabia and Iran retain great sensitivity to domestic developments within regional countries viewed through the prism of bilateral geopolitical competition. In that sense, the paramount front in the regional struggle between the two states is Yemen.

Since the outbreak of a devastating civil war in the country, Saudi Arabia has forcefully opposed the presence and expansion of Houthi control in Yemen, launching a military intervention in March 2015.

Iran, on the other hand, has supported the rebels in Yemen through a variety of means. Yemen continues to be a major issue on the agenda of ongoing talks between Riyadh and Tehran.

The divergence between Saudi Arabia and Turkey amid the 2017 Gulf crisis weakened Ankara’s interest in the Yemeni issue. Yet Turkey continued its humanitarian role there and maintained its condemnation of Houthi attacks against Riyadh.

The idea that the Saudi-Turkish reconciliation might develop into cooperation at the defence level constitutes a nightmare for Iran. Given the latest performance of the Turkish-made Bayraktar TB2 unmanned aerial combat vehicle, the Iranians are particularly worried about the transfer of these to Riyadh.

In a report released by Fars News Agency after Erdogan’s visit to Saudi Arabia, specific attention was given to Turkey’s conformity with Saudi policies “against Yemen”. Any expansion of the reconciliation process into military cooperation between Turkey and Saudi Arabia is certain to create heightened anxiety among Iranian policymakers.

One report released by Tasnim News Agency after the visit drew attention to the question of whether the improvement of relations between Turkey and Saudi Arabia would lead to more military cooperation, and whether Turkey could assist Saudi Arabia in the war in Yemen and sell armed drones to the country.

The resilience of the Turkish-Saudi reconciliation is contingent upon many factors, including those related to Iran. Two simultaneous negotiation processes are especially critical in this regard.

The ongoing talks between Riyadh and Tehran to normalise their relations and find a mutually acceptable modus vivendi in the region hold the promise of some moderation in their protracted rivalry. A favourable arrangement between Saudi Arabia and Iran would mitigate Iranian misgivings about the progress of Turkish-Saudi relations.

The second negotiation process is currently underway in Vienna over the Iran nuclear deal. While the ongoing negotiations do not directly involve Turkey and Saudi Arabia, their outcome carries great importance for their foreign policies.

(Ali Bakir and Eyup Ersoy for the Middle East Eye)

Report: Saudi-Iran detente could save the Arab world from another decade of strife

Operation Claw-Lock: The Iran-Turkey Contest for Iraq Heats Up

Iran, Saudi Arabia set to resume new round of talks in Iraq