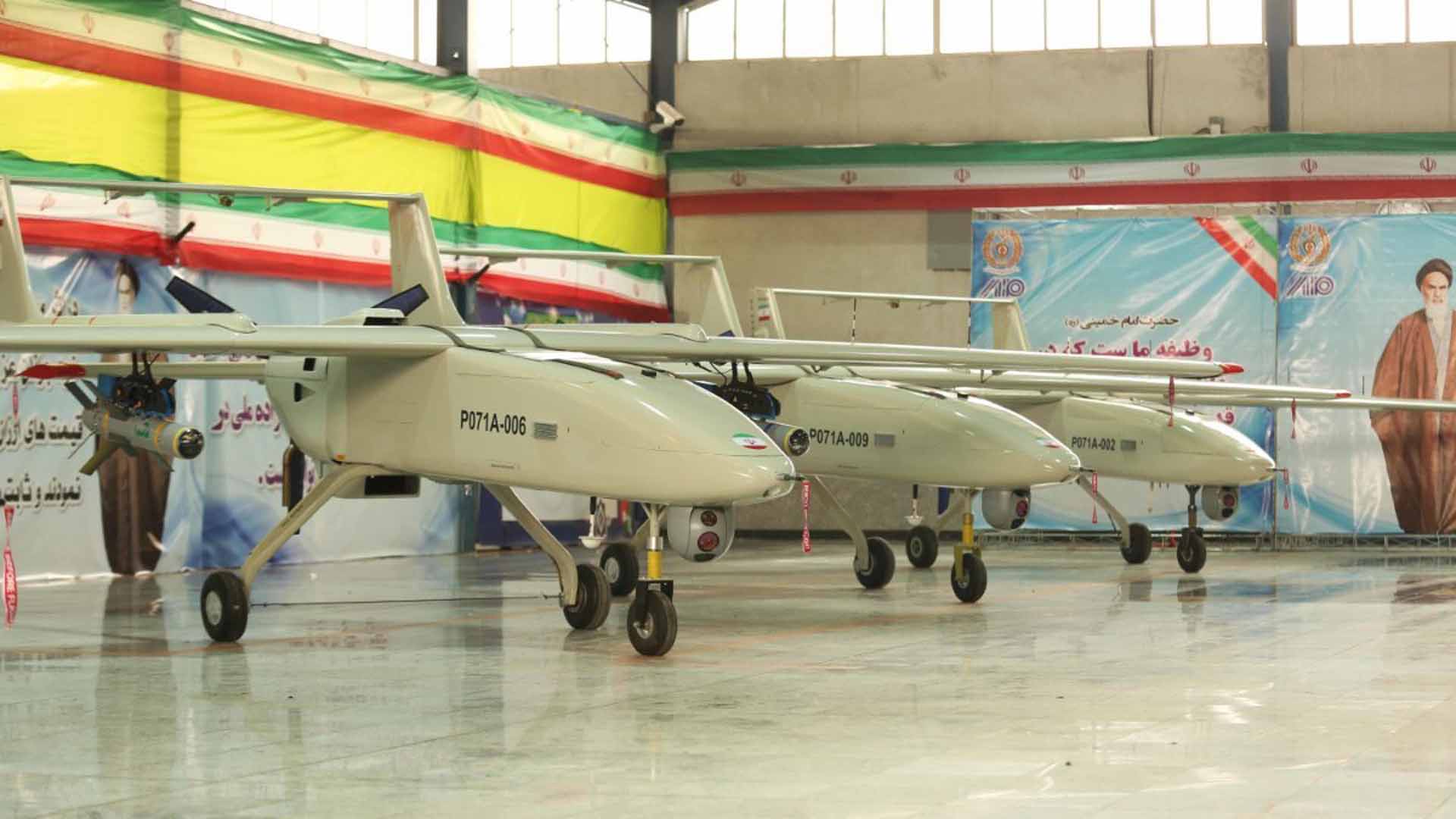 Frantzman’s book includes a chapter on Iranian use of drones. Following a recent deadly drone attack on a ship off the coast of Oman, which has been attributed by the US to Iran, Breaking Defense brings this excerpt from thr book.

In the drone wars, propaganda can be as important as actual advances. Everyone building drones seems to copy one another. For instance, Iran’s Saegeh was a copy of the Sentinel. Iran’s Shahed S-171 jet-powered Simorgh is also a copy of the US Sentinel drone, first deployed by Tehran in 2014. Amir Ali Hajizadeh, commander of the aerospace force of the IRGC, pushed to arm the Saegeh with up to four missiles.

The battle for the skies in the wake of Iran’s downing of the Sentinel in 2011 moved from a world that had one drone superpower to multiple drone makers. This fundamentally changed the equation and the threats that drones could pose. Iran’s goal was to create an independent drone army, much as Israel had done in the 1980s, providing Tehran with the impunity Washington had previously enjoyed. Under Hajizadeh’s guidance, Iran would bring down not only the stealth Sentinel but also the US Global Hawk in 2019, and Iran would send drones to Yemen. The world was entering a drone war revolution of rapid change in just several years.

To get to the point of confronting the Israelis and America, Iran had been down a long and bloody road. After the 1979 Islamic Revolution, it had a number of US target drones sitting around, remnants from the Shah’s air force. But Iran’s new leaders had no time to learn how to use them. On September 22, 1980, Iraqi warplanes struck Iran, and the Iran-Iraq War began. Iraq was a technical giant, with Soviet weapons and poison gas. Iran’s new religious revolutionary guards were tinkering with drones. Soon they were carrying early models into battle. In 1986, Qasem Soleimani, the future IRGC leader, led his men across the canals that link Iran with Iraq’s Basra, where fish breed amid the waterways. Accompanying him were new Iranian drone warriors. Nine-hundred-forty missions were flown, and 54,000 photos taken, according to Iranian media.

Iran innovated. In the 1980s, it constructed the Quds Mohajer, first flown in 1985. Eventually, hundreds of the small unmanned planes, which could be carried by two men, would be built. The original HESA Ababil followed in 1986, with some 400 built. HESA, the company that built it, was actually founded in a former Textron factory that built Bell helicopters before the revolution. The Ababil was a loitering munition, more like a cruise missile, launched from a catapult on a truck. Similar drones were exported to Lebanon and Yemen.

Iran may have also gained insight into Israeli drones through two Pioneers that were shot down in Iraq in the 1991 war. In recent years, Iran may have gotten access to Predator wreckage in 2015 when one was lost over Syria, or to a ScanEagle and Reaper shot down in Yemen. From outward appearances, Iran had no trouble relying on blueprints or photos, but its real problem was trying to build up the endurance of its drones and their abilities to conduct surveillance, to relay communications back, or to target enemies. For instance, the kind of composite materials, guidance, and electro-optics that hi-tech industries in the US and Israel had were not widely available to Iran under sanctions.

Iran was successful at turning its Ababils and Mohajers into advanced UAVs. In 2008, UN Peacekeepers inquired about drones they saw being used in Sudan. The government told them they were Zagils, an Iranian Ababil-3 that was renamed. Two were shot down by rebel groups. Venezuela also bought Iran’s Mohajer-2 in 2007 to use them for surveillance.

Iran built several generations of each of these drones from the 1980s to 2010. They were all initially limited in their range by line-of-sight. In addition, their small fuel tanks limited their range. In April 2020, Iran unveiled a wide array of new Ababil-3s for the air force and army, claiming that they had new guided-bomb capabilities. It also showed off a new cruise-missile-like Karrar drone. Tehran claimed they could fly 1,500 kilometers and that its drones now reached heights of 45,000 feet. Col. Akbar Karimloo noted in the spring of 2020 that the IRGC’s UAV command was rapidly increasing its communications abilities. He told Tasnim News that his drones were advancing in using video imaging, GIS, and increasing ranges beyond one hundred kilometers.

Iran’s goal after creating a drone force was to use them to harass its enemies. Tehran sketched out an arc of countries where it wanted to project its influence. This would begin with the “near abroad” in Iraq and extend to Syria, Lebanon, Yemen, Sudan, Gaza, and Afghanistan. The Persian Gulf and Gulf of Oman would receive overflights of Iranian drones.

Could Tehran go toe-to-toe with the Americans on drone power? The US was overstretched as Iran was emerging as a drone power. To challenge the Americans, Iran established a network of drone bases along and south of the Strait of Hormuz. A new airstrip would be built at Jakigur in 2015. By this time, Iran had a lot of experience moving its drones around. It had sent them to Syria and based them at a desert base called Tiyas, or T-4.

From Tiyas, it would launch a drone in February 2018 to test Israel’s defenses. The drone flew near the Golan and infiltrated near Beit Shean in the Jordan Valley. Israel scrambled an Apache helicopter and shot it down. In the course of retaliatory air-strikes, an Israeli F-16I crashed in northern Israel. I was staying in northern Israel at the time and was awoken by news of the crash on the morning of February 10. I drove out near the town of Shefa’amr, where the F-16I had crashed in a field near a row of giant chicken coops. This is what Iran’s drone war had wrought.

Iran had become increasingly brazen. On January 12, 2016, it sent a drone to fly over the USS Harry Truman and the French Charles de Gaulle. The message appeared to be that in the wake of the Iran Deal in 2015, Tehran felt it was winning in the Middle East. Kevin Stephens, a spokesman for the US Fifth Fleet, said the UAV was not armed and posed no risk. It was “abnormal and unprofessional.” Iran had sent its new Shahed 129 to conduct the overflight, which illustrated that while the US saw this as merely unprofessional, Iran was testing the drone’s capabilities. They then sent a Sadegh drone buzzing over the USS Nimitz in August 2017 in the Persian Gulf and said it flew over the USS Eisenhower in April 2019.

Iranian drone exercises followed, including a massive March 2019 drill at sea involving fifty drones that Iran dubbed the “way to Jerusalem” exercise. The problem facing the US, Israel, and other countries was that there was no easy defense against Iran’s drones. Washington had spent so long packing drones with technology to kill insurgents, they had ignored the importance of combatting states that have drones.

The Hill: Iran-linked drones are one more reason to end the war in Iraq

There’s talk of a military option against Iran. Here’s why it’s unlikely.

“Iraqis are getting fed up with Iran”, The Economist

Brookings on the New Levant Project: A new partnership 30 years in the making?