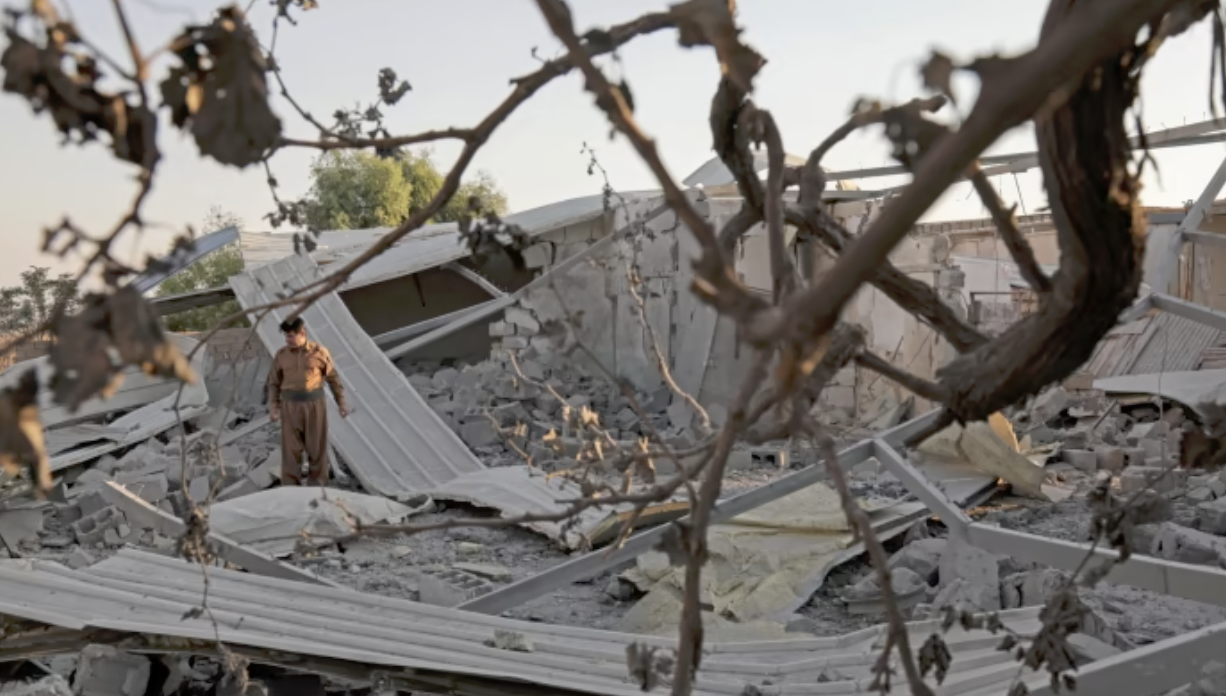 Shafaq News/ For decades, Iranian Kurdish opposition groups have found relative safety in neighbouring Iraq, where they set up bases and agitated for greater freedoms at home. Some even fought alongside US-backed Iraqi Kurdish security forces against Isis militants.

But in recent weeks, their strongholds have come under a barrage of fire from Tehran, which has launched dozens of drones and ballistic missiles across the border into Iraq’s Kurdistan region.

Iran accuses the Iraq-based Iranian Kurds of supporting the anti-government protests that have engulfed the country since mid-September, spurred by the death of 22-year-old Mahsa Amini. The young woman, killed in the custody of Iran’s morality police, was an Iranian Kurd.

“We’re being used as a scapegoat,” said Khelil Nadri, a spokesman for the Kurdistan Freedom party (PAK), one of a handful of armed Iranian Kurdish opposition groups based in Iraq that have been targeted.

Nadri, speaking from an undisclosed location in Iraq’s border mountains, said at least 19 PAK members had been killed since the attacks on their bases began in late September; at least seven of those were killed after a barrage of missiles were fired at one of its bases on Tuesday. The UN refugee agency said Iranian refugees, including women and children, were among the casualties in the September strikes.

“This is all to divert the international community’s attention away from domestic affairs and the situation in Iran.”

Since the protests erupted in Iran, at least 305 people have been killed in Iran, including at least 41 children, Amnesty International said; 42 of those people were killed in the past week alone as protests gained momentum in Kurdish-majority western cities including Mahabad and Javanrud.

Ethnic Kurds live across Turkey, Syria, Iran and Iraq, but lack their own state. Iranian Kurdish dissident groups, which have been engaged in a low-intensity conflict with the regime in Tehran over their desire for greater autonomy since the 1979 revolution, moved their bases to Iraq in the 1980s and 1990s.

Iran alleges that these groups have been smuggling weapons across the border and stirring up protests, with the country’s foreign minister on Wednesday saying there were “76 terrorist bases” involved in such activities — accusations the groups deny.

The escalating tensions now threaten to overwhelm Iraq’s semi-autonomous Kurdistan Regional Government (KRG), which has called for international intervention to stop the attacks and has complex relations with Baghdad and Iranian Kurds. “Things cannot continue like this, these attacks have to be stopped: civilians are dying and our economy is taking a serious hit,” a KRG official said.

The KRG has for many years allowed the Iranian Kurds to operate in Iraqi Kurdistan, while also maintaining a working relationship with Tehran and its allies in Baghdad. Decades of integration mean ties run deep: many Iraqi Kurds fled to Iran when Saddam Hussein attacked them in the 1990s, and “were welcomed with open arms — Kurdish people won’t turn their backs on them now”, the KRG official said.

Although the KRG gained self-rule in the 1990s, it largely depends on the federal government in Baghdad for its budget and security needs. It must therefore balance its Kurdish solidarity with a need to pacify Baghdad, itself under pressure from Iran.

New Iraqi premier Mohammed Shia’ al-Sudani’s fledgling government is buttressed by parties and militia groups close to Tehran. Sudani has condemned recent attacks on the Kurds by Tehran as a “violation of Iraqi sovereignty” and has urged its neighbours not to use Iraq as an arena “to settle scores”. But Iran has made its intentions clear: the country’s Revolutionary Guards will launch more air attacks if the dissident groups are not disarmed.

In a meeting in Baghdad last week with Sudani and other government officials, Esmail Ghaani, who heads the Quds Force, the wing of the guards responsible for its overseas operations, threatened a ground invasion should Baghdad fail to disarm the groups and fortify its borders, three Iraqi and Kurdish officials told the Financial Times. An official in Baghdad said the threat “has to be taken seriously. They’ve amassed troops at the border and Iraq doesn’t have the power to stop them from coming in.”

Iran’s foreign minister Hossein Amirabdollahian on Wednesday told reporters the Islamic republic had reached an agreement with Iraqi officials “to disarm” the groups, but until its implementation “our armed forces will continue their acts to provide maximum security for the country”. Baghdad and KRG officials denied that an agreement had been reached.

Please use the sharing tools found via the share button at the top or side of articles. Copying articles to share with others is a breach of FT.com T&Cs and Copyright Policy. Email [email protected] to buy additional rights. Subscribers may share up to 10 or 20 articles per month using the gift article service. More information can be found at https://www.ft.com/tour.

Sudani has said the KRG refused a request to disarm the Iranian Kurdish groups, an interaction the KRG official denied took place. Before this week’s attacks, Sudani had sent his national security adviser, himself a senior figure in the Iran-backed Badr Brigade militia, to Tehran to try to negotiate a solution, the Baghdad official said.

The regional government has pinned its hopes Sudani’s new government to find a solution. Visiting Baghdad on Tuesday, KRG regional president Nechirvan Barzani discussed the cross-border attacks with Sudani, which the official said was “a good first step”.

Back in the mountains of northern Iraq, PAK members were bracing for fresh strikes. In footage shared with the FT after Tuesday’s attacks, drones were seen circling overhead while plumes of smoke still billowed in the background from the earlier strikes.

The KRG official said there were no reliable estimates for the number of protesters who had fled Iran. But Nadri said at least 150 protesters had joined their ranks and a minority had signed up to train as fighters — mostly women fleeing “for their rights”.

“Our larger goal, of an independent Kurdistan, frightens the Iranian regime the most,” Nadri said. “Inside Iran, our Kurds have faced suppression, oppression, assimilation, ethnic cleansing, genocide and murder. People can’t stand it any longer.”

Iran's Velayati: there never was a war between us and Iraq