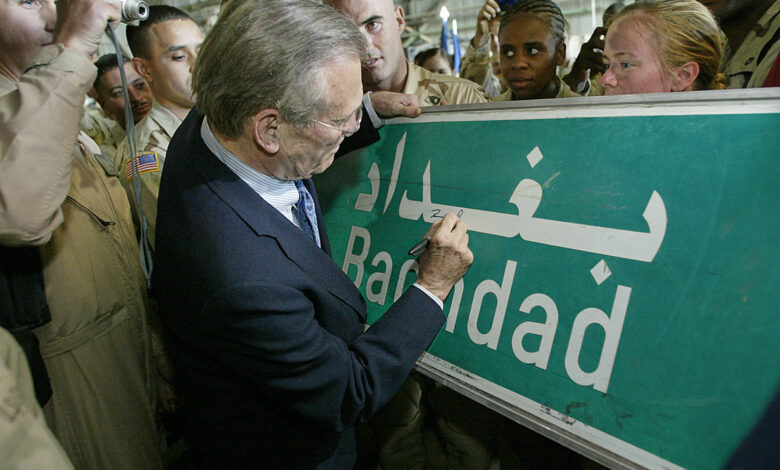 Shafaq News / The departure of Donald Rumsfeld is an Iraqi news par excellence. His relationship with Iraq extends to the early 1980s - when Saddam Hussein was in power - as he was considered a staunch ally. Through his positions in successive U.S. administrations and until he died at 88, Mr. Rumsfeld remained closely connected to the Iraqi file, all the way to his leadership and engineering of George W. Bush's invasion of Baghdad, and the overthrow of the Baathist regime. However, the chaos of Iraq later removed him from the circles of American power.

Donald Rumsfeld's name will forever be associated with the biggest military fiasco in U.S. history. His name has been linked to Iraq since he landed in Baghdad in December 1983, at the height of the Iran-Iraq war, precisely after Saddam Hussein lost Iranian territory he had taken control of in previous years from the start of his attack on Iran.

Rumsfeld, who came as a special envoy from President Ronald Reagan, was carrying a U.S. message that Washington would not stand by the imbalance of power in favor of the "Iranian revolution" at the beginning of its time. So, the Americans were ready to help Saddam Hussein to stand firm against the Iranians, including military and diplomatic support, even when U.S. intelligence reports assured the White House that Saddam's actions, including chemical attacks and genocide, are proven and documented.

This did not prevent Rumsfeld from leading Reagan's relations with Saddam Hussein to political normalization. He even revealed in later years, specifically in 2011, that Saddam Hussein, whom he met several times in Baghdad during the 1980s, gave him a black-and-white video as a gift to show the "brutality of the regime" in Syria, where Syrian female recruits were shown eating snakes with their teeth, as well as Syrian soldiers stabbing dogs to death, in the presence of Syrian President Hafez Al-Assad, who was clapping for them.

Rumsfeld's direct communication channel with Saddam Hussein, and U.S. support for K.S.A. and Kuwait to intensify their financial support for the Iraqi regime, have in one way or another, prolonged the Iran-Iraq war and drained the two neighboring countries in a war that have claimed nearly a million victims.

Rumsfeld returned to Iraq after George W. Bush won the election in 2000. His tenure at the Defense Department made him the most famous U.S. defense secretary since former Defense Secretary Robert S. McNamara during the War in Vietnam.

Bush's presidency opened the door wide to the rise of "conservative hawks" to the forefront of the political scene, including Dick Cheney, Paul Wolfowitz, Condoleezza Rice, John Bolton, and others. They have been classifying the world between "good and evil" and based on "those who are not with us, are against us". Rumsfeld, in particular, played a central role in engineering U.S. "revenge" against "enemies" in Afghanistan and then in Iraq, armed with the Americans' bitterness from the tragedy of the September 11, 2001 attack.

Rumsfeld has been known for calling for toughening U.S. foreign policy while on the political ladder in power circles since the 1960s when he was elected republican, then chancellor in 1970 for "scandalous" President Richard Nixon, under the Watergate scandal, and then defense secretary between 1975 and 1977 under President Gerald Ford.

U.S. reports said Rumsfeld had great wealth after working in the private sector after president Ford's era, a financial activity he returned to after leaving the Pentagon in 2006 at the height of the U.S. confusion in Iraq at the time.

Eleven attacks provided enough political ammunition for Conservative Hawks to launch the most powerful military instrument in history to uproot Taliban rule in Kabul and then Saddam Hussein's rule in Baghdad. Rumsfeld was the architect and one of the main planners of these wars. While the Taliban were blamed for the September 11 attacks under the pretext of Al-Qaeda, weapons of mass destruction were the pretext used to invade Iraq.

Despite the "success" of bringing down the Taliban and Saddam Hussein, Rumsfeld was blamed for having chosen to rely on limited military forces to achieve these goals and did not take into account the need for greater U.S. forces to ensure land capture and rebuild the power and state structures that collapsed in Kabul and Baghdad.

Perhaps precisely because of this vision, Iraq was plunged into total chaos. The U.S. presence was greatly threatened as well, for it has been embroiled in one of the biggest military scandals in history by exposing the tragic torture and killings that were taking place at Abu Ghraib and then at Guantanamo Bay Detention Camp, to the point where, in addition to not finding weapons of mass destruction, it forced him to resign in 2006, after he tried to resign twice the year after the invasion, in 2004, but Bush rejected them. It is said that Rumsfeld did not resign, but it was Bush who initiated his dismissal to contain the enormous political and media criticism of his administration.

U.S. researchers wrote a lot about another failure of Rumsfeld that increased the overall Iraqi chaos, which is his approval of the American governor, Paul Bremer's decision regarding the uprooting of the Baath Party, which did not only remove the senior leaders and officials but also removed the employees in government departments and agencies, which reinforced the confusion and collapse of institutions in turn and the seizure of many opportunists on the resources of the state.

Rumsfeld paid no attention to other political leaders and military generals on how he handled the Iraq war. Armed with close ties to Vice President Dick Cheney, he clashed with former Secretary of State Colin Powell, who later resigned from the Bush administration. He was also criticized for not listening to his generals about warnings about the threat of an armed "insurgency" that is emerging against U.S. forces in Iraq.

After his resignation, a new defense secretary, Robert Gates, took office and made major changes to U.S. policy and administration of the Iraq war.

Although Saddam Hussein was arrested and executed at the end of 2006, Al-Qaeda leader, Osama bin Laden, remained free in Afghanistan for ten years until his death in 2011. Rumsfeld was held responsible for this failure for sending too few troops to the Afghan war.

As his later memoirs show, he was not learning from his experiences, "If you are not criticized, you may not be doing much work."

Rumsfeld also said in his book, "Getting into a problem is easier than getting out of it." The former defense minister was also known for his bizarre remarks. At a press conference in April 2003, a journalist asked him if Saddam Hussein was likely to give weapons of mass destruction to terrorists, and he responded, "Reports that something did not happen are always interesting to me because, as we know, there are things that are known. There are things we know we know. We also know that there are unknown things known. That means we know there are some things we do not know."

Years later, Rumsfeld chose the title "The Known Known" to his memoirs.