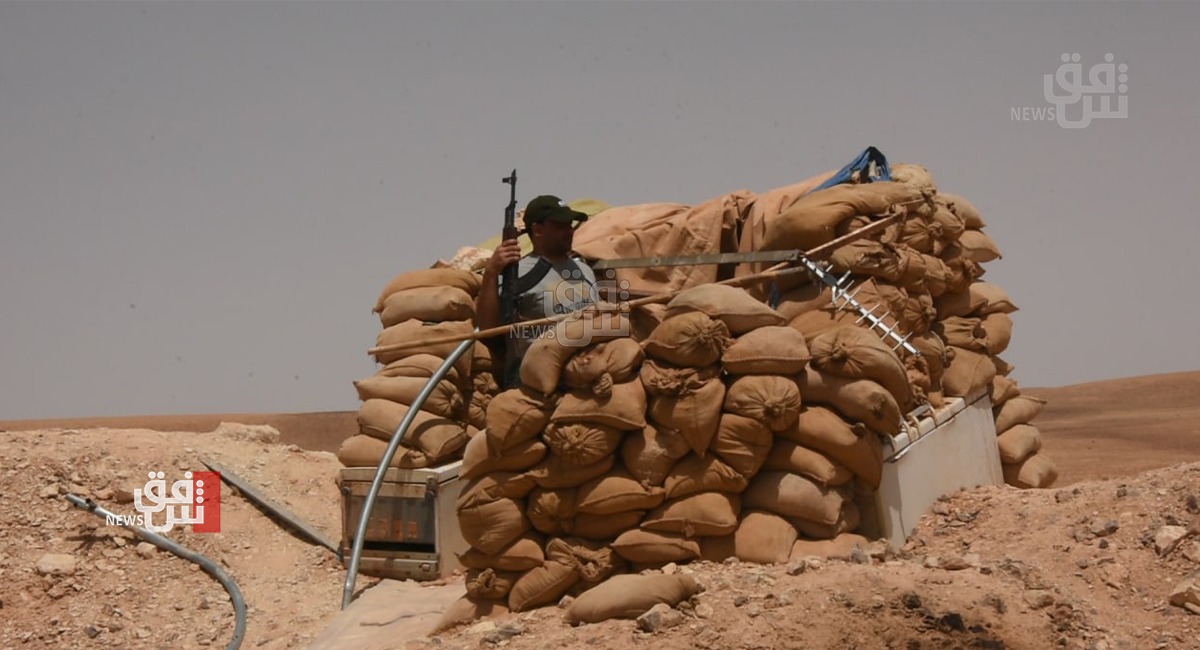 Shafaq News / For the second week in a row, tribal members of the western regions of al-Anbar continue to implement the instructions of the General Command of the armed forces, to protect their areas and hunt down ISIS militants in the governorate's desert areas.

While officials in al-Hashd al-Shaabi (Popular Mobilization Forces-P.M.F.) stated that the decision includes allocating "a geographical area for each tribe", the decision raised question marks from political analysts regarding applying it in al-Anbar alone, although the decision was issued during the era of Adel Abdul Mahdi, and included all liberated cities, but was not implemented at the time.

"Geographical area for each clan"

"Under the instructions of the General Command of the Armed Forces, tribal members of the western areas of al-Anbar, western Iraq, have been tasked with supporting Iraqi security services in the war against ISIS, repelling its attacks, and monitoring their movements in desert areas surrounding residential areas," said Malullah Barzan, deputy commander of al-Anbar's P.M.F.

"The role of tribal people is focused on the Shamia, which belongs to al-Rutbah district, the areas T1 and al-Jazeera, Mosul, Baiji, Samarra, and Saladin," Barzan continued.

"It was agreed to arm the tribesmen to help them confront ISIS, which has increased its attempts to carry out its plans," Barzan said, adding that a geographical area has been allocated to each tribe to chase ISIS's remnants and protect areas near the desert.

"It is no secret that the al-Anbar tribes, in cooperation with security services, played a significant role during the war against ISIS. In fact, al-Anbar tribesmen can eradicate the terrorist organization's remnants in the deserts or elsewhere."

"Since the beginning of this month, the hunt for ISIS in many desert areas west of al-Anbar has been entrusted to the P.M.F., tribal leaders, and many volunteers deployed in these areas, as part of partitions divided under the supervision of the commanders of the ground forces, al-Jazeera operations command, the joint operations command, and al-Anbar operations command," said Awad al-Jughaifi, a P.M.F. leader.

"Several operations have been carried out since the launch of the ISIS hunt to track down the terrorists, gather information about them, and verify the identities of sheepherders and others in those areas."

"Two operations have been carried out in the last three days, the most recent of which was deep in the island's desert. Operations to track down ISIS are ongoing," said al-Jughaifi.

"So far, the operations have been for reconnaissance. It aims to move and reach the furthest possible point."

"We have conducted operations in larger areas, such as Saladin and Nineveh, in coordination with the Joint Operations Command, without identifying liability partitions. The results will be impressive in the coming days."

"The desert of al-Anbar is vast, and the people of the western regions are fully aware of the terrain and details of their areas. They also plan to track down ISIS remnants."

"The number of remaining ISIS militants does not require security units equipped with huge numbers of vehicles and weapons. Instead, it requires little effort, qualitative operations, and tracking missions with light and fast vehicles, unlike those of the army, police, or other security services," al-Jaughaifi added.

"None of the tribesmen were armed, and the mission was assigned to tribal leaders and a section of the P.M.F. in those areas, as well as volunteer tribesmen."

Ghanem al-Abed, an Iraqi security researcher, said that the decision to form tribal crowds in liberated cities and the withdrawal of the P.M.F. from those areas was a decision issued long ago by Adel Abdul Mahdi, but it was not implemented at the time.

He added, "The implementation of the resolution in al-Anbar at this time raises concerns, given the governorate's current political conflicts, and its dominance over Sunni decision-making, amid disagreements over the new government and the rumor of "desert ghosts". As a result, forming tribal crowds to take responsibility for the western regions is surprising and raises many question marks."

"Why is the resolution only being implemented in al-Anbar and not in Nineveh, Saladin, or Diyala? Is ISIS found only in al-Anbar?"

Al-Abed added, "Why have the central government and the Kurdistan regional government (K.R.G.) not agreed to address the problems of the disputed areas under the supervision of the Global Coalition, and through the formation of military brigades whose fighters belong to those areas and are linked to the Iraqi Ministry of Defense to keep the P.M.F. out?"

"The decision poses a major threat to al-Anbar's people, especially since Iranian state militias control the Iraqi-Syrian border. In addition, Tehran has already set up three camps on the Syrian side over the past year. These camps are run by Afghan, Pakistani, Iranian, and other ideological militias; not to forget the al-Hol camp and Guweran prisons. Each of the above factors poses a risk to Iraq; and al-Anbar in particular," he said.

"Everyone knows that tribal mobilization groups do not have the arsenal the Popular mobilization has. So, how are they going to defend their areas?"

The worst in ten years.. bitter crisis resurfaces in Al-Anbar