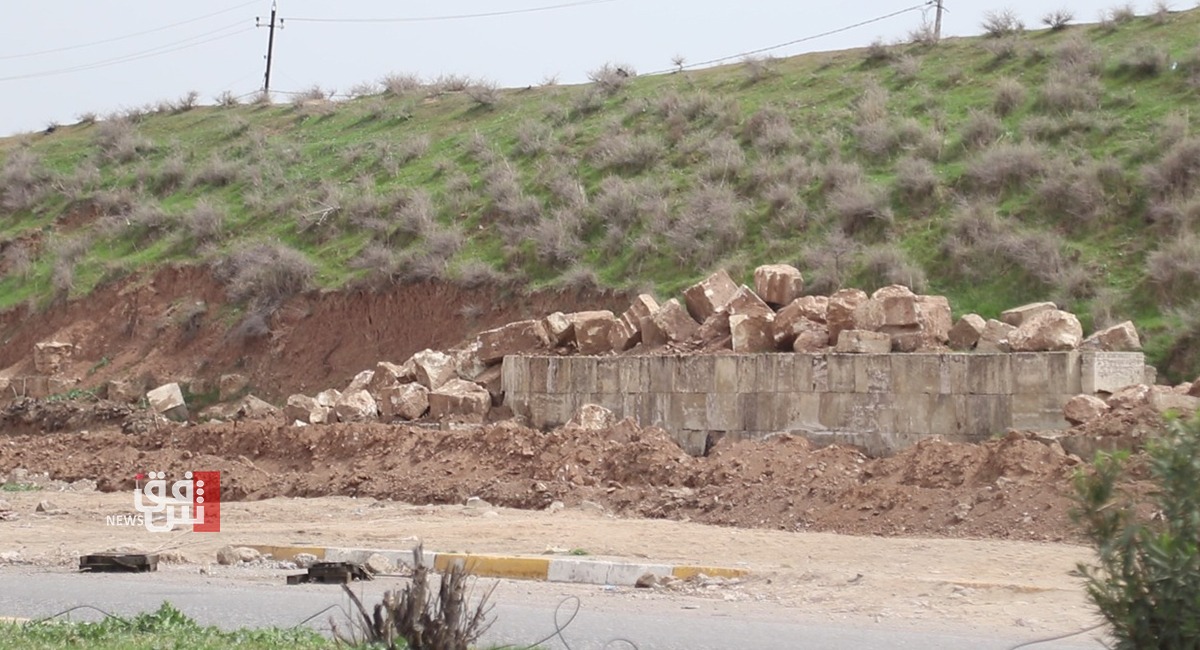 Shafaq News / What ISIS did to Mosul's antiquities was not surprising compared to its idealism that everything carved is contrary to its law, so it stole, looted, and destroyed statues and sculptures.

However, it seems that ISIS shares that view of antiquities with official government bodies as they seem indifferent to antiquities' historical and national value.

Mosul is a thousand-year-old city with monuments of various Iraqi and non-Iraqi civilizations, including the historic Nineveh Wall near the Narkal Archaeological Gate.

This wall has not been spared from sabotage, but this time by the Mosul municipality and not by ISIS.

Former MP Joseph Salewah held a press conference near the archaeological wall of Nineveh, and described the wall's bulldozing as "a real disaster and a crime committed against Nineveh's antiquities".

Salewah said that he met with the Antiquities Department officials in Nineveh and noted that they had been "pressured and could not talk about it", adding, "beyond Nineveh's antiquities and its history, there are attempts to change the demographics, targeting Mosul and its people. There are powerful actors behind this issue, as well as armed groups working on behalf of the Iraqi government".

He appealed to Prime Minister Mustafa Al-Kadhimi to stop the crimes taking place against the antiquities of Nineveh, "Even the residents of the area appear to have been intimidated as well".

Saleweh challenged the compensation appeals forwarded by the owners of the lands adjacent to the wall (which the former regime confiscated) after the Mosul municipality constructed a road, "I have documents that prove they have received compensations. I will submit them to the authorities."

He warned the Iraqi government of ignoring what was happening, threatening that he would turn to international actors to stop it.

Security sources confirmed to Shafaq News Agency that the Antiquities and the Municipality departments removed the bulldozing machines from the site before the arrival of former MP Joseph Salewah. In contrast, a security force tried to prevent the former MP from holding the conference and photographers from documenting what remained of the wall.

Nevertheless, Salewah held the conference and spoke in detail, and in the wake of pressure and popular anger, Nineveh's governor was forced to stop the work on the historic wall.

"What is happening is catastrophic and the destruction of antiquities has begun with ISIS and is carried on today by the local government. The prime minister must intervene to prevent what is happening in Nineveh", civil activist Sa'ad Amer told Shafaq News agency.

In conjunction with Salewah's conference, Mosul's deputy commissioner, Zuhair Al-Araji, was speaking at a press conference on the subject, "The local government is forced to extend a new street next to the old one because of a judicial decision after a lawsuit filed in 2014 by the family that owns the land - on which the street was built several years ago - but the street was not removed because of ISIS's occupation".

"After the city's liberation, the family appealed the case and obtained a judicial decision in 2019 obliging the local government to return the land and divert the street from it, which will be extended near the archaeological wall", Al-Araji said.

"The municipal department cannot compensate the landowners because it is now worth 90 billion dinars – as it is one of the distinctive lands in Mosul. The local government will bear the cost of removing the old street and constructing a new one for 3 billion dinars, and the local government has no alternative option and is obliged to carry out judicial orders", he added.

"We have no alternative solutions other than the implementation of judicial orders. This case has been conflicted since the time of former governor Atheel Al-Nujaifi", Mosul's municipality director, Radhwan Al-Shahwani told Shafaq News agency.

"We either pay the 90 billion dinars or return the land to its owners and build a new street at 3 billion dinars, which is recommended by the last judicial decision in 2019, and we are obliged to implement it", he added.