A year of bloody protests in Iraq.. Is it time for the end? 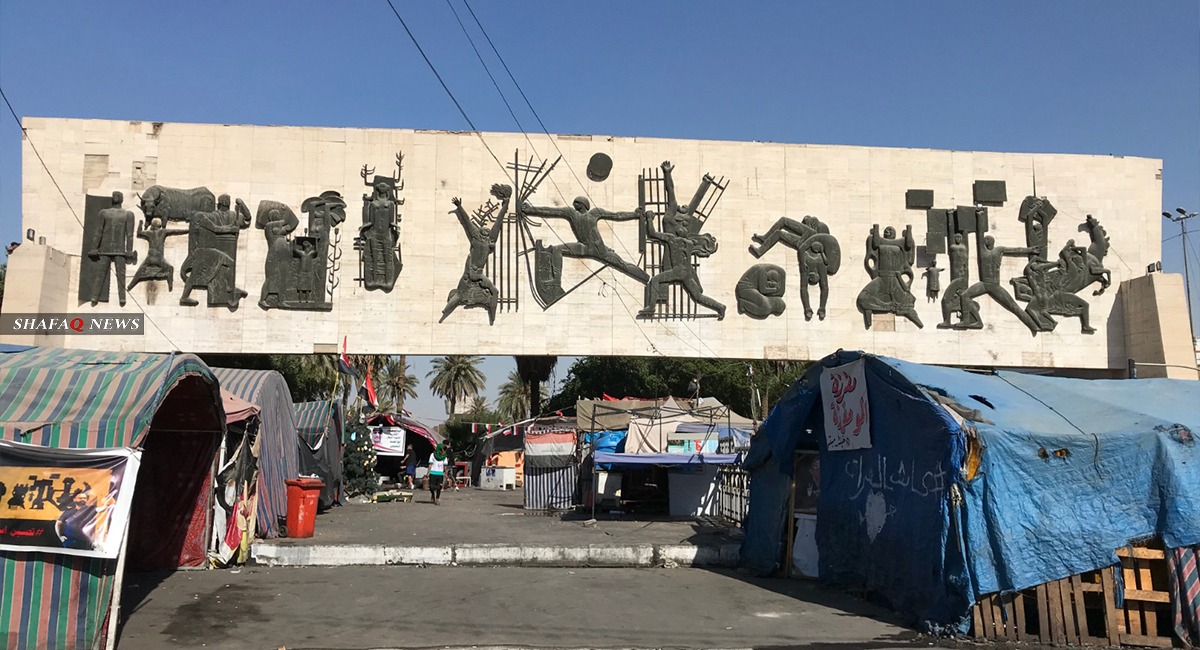 Shafaq News / A few days separate us from the first anniversary of the biggest protests in Iraq, and as many protesters continue to barricade themselves in the Tahrir Square in Baghdad and other sit-ins in the center and south of the country, fears are growing among activists that the moment of the end is near.

Activists called for a large demonstration on the protest’s first anniversary on October 25th to revive the movement, which has lost momentum since the emergence of the COVİD-19 pandemic in March.

The protests first came a year ago against the ruling political elite accused of corruption and dependence on the eastern neighbor Iran, which has close ties to Shiite leaders who have ruled the country since the overthrow of Saddam Hussein's regime in 2003.

"We face many challenges. We are wanted by the judiciary on false charges, and we are being prosecuted by some parties and political leaders”, protesters -who asked not to be named because of concerns for their lives, told Shafaq News agency.

"The protest square has faced several challenges, especially these days, as some tent owners have evacuated the square due to government pressures and negotiations, as well as pressure from some influential parties in the Tahrir Square. The Turkish restaurant was sealed tightly and no person who did not belong to the “blue berets” was allowed to approach it; the Turkish Restaurant was -at the time- the source of the protests ", said protesters.

The “blue berets” is a name that followers of Shiite leader Muqtada Al-Sadr call themselves with.. They were protecting protesters at the height of popular protests, but their position quickly changed and they used force to strike protesters in Baghdad and other provinces, in what the Sadrist leader described as a “warning".

Popular protests in Iraq began a year ago in Baghdad and the Shiite-majority central and southern provinces, and succeeded in forcing the government of Adel Abdul Mahdi to resign late last year.

The protests were marred by bloody violence, with the demonstration swung into open confrontations between demonstrators on one hand and security forces alongside unidentified gunmen -and others suspected of being pro-Iranian Shiite factions, on the other.

Dozens of popular movement activists have been kidnapped and assassinated by unidentified gunmen throughout the year of the protests.

According to figures from the government of Prime Minister Mustafa Al-Kadhimi, 560 protesters and security personnel died in the protests.

At the time of the formation of his government last May, Al-Kadhimi set up a commission of inquiry into the violence; pledging to bring those involved to justice -but no accused has yet been brought to justice.

Al-Kadhimi has repeatedly pledged to protect the protests, but protesters feel that the government intends to end the protests after the 25th of This Month.

"The Iraqi government intends to open the Tahrir Square to citizens after 25th of this month -after qualifying it by the Mayoralty of Baghdad, to bring the situation back to the way it was before October”, a source inside the protests told Shafaq News agency.

However, some protesters refuse to withdraw and call for escalation, while others accuse them of being political actors who are taking advantage of the chaos -according to one protester, who added, "Some protesters confirm that if the squares are evacuated, most of those remaining in the squares will be assassinated".

Even before the evacuation of the protest squares, activists received threatening messages from unknown parties.

"Four days ago, several social media pages published a series of names of protesters in Baghdad, Basra, and Dhi Qar provinces, who will be kidnapped and murdered -as claimed by those pages”,  Zaid Al-Sayed Abbas, one of the movement's participants, told Shafaq News agency.

"After we were threatened on social media, I received a text message via mobile phone from an anonymous number stating, (Zaid Abbas and Mohammed Al-Yassiri any move from you in Basra will be your last, you are a target for us)”, Zaid said.

"We are trying to reach the clues of the crime to uncover who is behind the assassination of the protesters -including activist protester Tahsin Osama, by taking all legal measures and informing the Basra Police Command", Abbas said.

"The demonstrations on October 25th will be limited in participation, so it will have no effect.. It will not be different from the demonstrations that started on October 1st, due to the decline in popular and even political support, as the protests are infiltrated by those who have offended it and damaged the reputation of the demonstrators", Al-Zamily added.

Sinjar: Ankara marching towards the district torn between Baghdad and the PKK

The Spymaster of Baghdad: Secrets from the Falcons chronicles