Photos.. The "pandemic" freezes Ramadan traditions in the oldest markets in Erbil

Shafaq News / This is how the streets of Erbil, the capital of Kurdistan Region, appeared a day before Ramadan began in an exceptional atmosphere that the province had not seen before.

Shafaq News camera toured the most vital streets of Erbil - before the pandemic crisis - the Citadel Market, where it was empty of people movement as a result of implementing measures to combat Corona epidemic in the capital of Kurdistan Region.

Qelat Market, as well as the rest of the main streets in Erbil, are almost void of movement in an exceptional atmosphere that the province did not witness in general, after it was crowded with shoppers in preparation for Ramadan every year, as is the case in the closure of mosques in the province.

The provinces of the Kurdistan Region and the rest of Iraq are living in an exceptional situation by applying prohibition and fear of the spread of Corona epidemic in conjunction with the start of Ramadan, which is of exceptional importance among Muslims in Iraq and the world.

Snow closes a main road between Erbil and Duhok 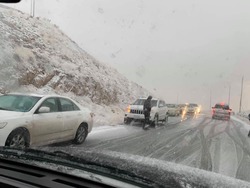 A new camp to receive Syrian refugees to open in Erbil