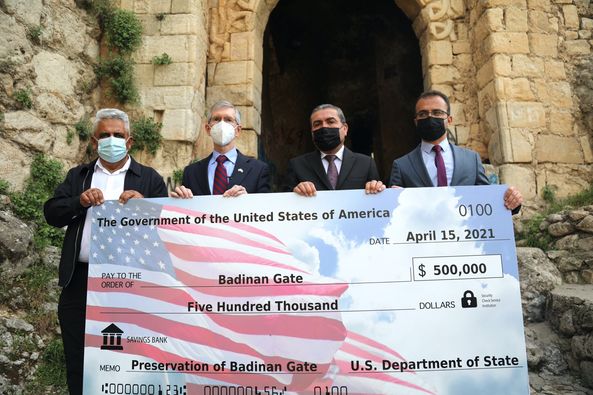 Shafaq News / The U.S. Consul General in Kurdistan, Rob Waller, announced that the U.S. Department of State has allocated 500 thousand dollars to rehabilitate and protect the Badinan heritage gate.

According to the Consulate General, “Consul General Rob Waller visited the ancient city of Amedi, where he received a warm welcome from Mayor Ismael Mustafa Rasheed. Waller announced the U.S. government grant for the preservation of the Badinan Gate”.

“Waller visited Amedi and met with Mayor, Mr. Ismael Mustafa Rasheed. CG Waller then toured the historical sites and enjoyed the magnificent views and sights of the ancient city.” The statement said.

“The US government is determined to help the Kurdistan Region of Iraq preserve and restore its wonderful cultural heritage, and it is happy to work with our Kurdish friends to achieve this goal.” Waller said.

The Consul considered "this grant is a new bridge to strengthen the ties between the U.S. people and the people of the Kurdistan Region of Iraq," adding that "the Badinan Gate will be preserved for all humanity."