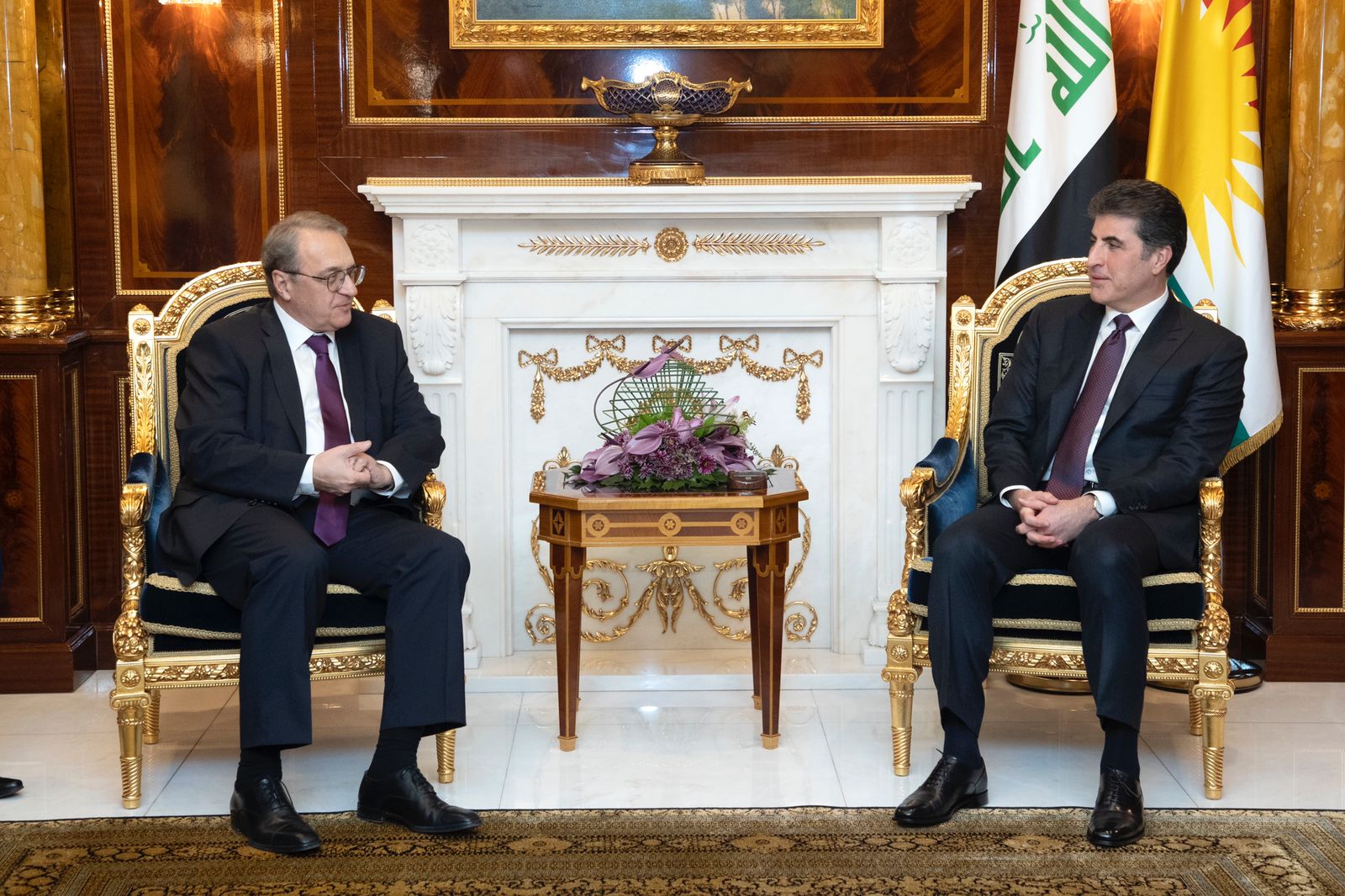 Shafaq News / President Nechirvan Barzani received Mr. Mikhail Bogdanov, Special Representative of President Vladimir Putin of Russia for the Middle East and North Africa, who is also the Deputy Minister of Foreign Affairs of the Russian Federation. Mr. Bogdanov headed a joint Russian delegation of diplomats and business officials to Iraq and the Kurdistan Region.

Mr. Bogdanov conveyed the greetings of President Putin and Russia’s Foreign Minister to President Nechirvan Barzani and expressed delight over the meeting to discuss and exchange views on regional developments and other topics of mutual interest.

Mr. Bogdanov commended the bilateral relations of his country with the Kurdistan Region and reiterated Russia’s willingness to further strengthen ties with Kurdistan. The Special Representative gave a brief overview of his recent visits to Tehran, Baghdad and Erbil.

Discussions covered a wide range of pressing issues including the recent parliamentary elections in Iraq and the final results, the future of the political process in the country and the formation of the next Iraqi government. Discussions also focused on the regional developments and their impacts on Iraq which are of importance to the Russian Federation including the situation in Syria and other pressing questions. In this regard, Mr. Bogdanov referred to his meeting with the Kurdish National Council in Syria (ENKS).

The President reiterated that the Kurdistan Region will continue to promote stability, pursue solutions to the existing issues in Iraq and looks forward to Shiite factions settling their disagreements on the outcome of the election aimed at forming the new Iraqi government through legal and constitutional procedures. The President stressed that it is important to recognize the critical period ahead in the country as all Iraqi sides should be encouraged to work together for peace and stability.

On the situation in Syria, the President affirmed that the conditions and crises in Syria have direct implications for the developments in Syria, and that the position of the Kurdistan Region, from the start, has been clear that Kurds need to resolve their issues within Syria. The President underlined the significance of a common understanding among Kurdish factions and recognized the importance of efforts to settle their differences.

The President and the Special Representative also discussed the joint Iraqi-Russian Commission and affirmed the importance of the Kurdistan Region benefiting from the commission. On the developments in the wider region, the common understanding of the regional countries and global powers were viewed as critical to resolve the issues, since no side will singlehandedly resolve the problems and the crises in the region, as sustainable solutions call for collective cooperation and partnership. Both sides also recognized that ISIS remains a serious threat to Iraq and Syria.

Source: The Presidency of the Kurdistan region

Barzani meets with the Kurdish minister in the British government