President Barzani to the Apostolic Nuncio: Kurdistan's Constitution preserves the rights of the Christians and all communities 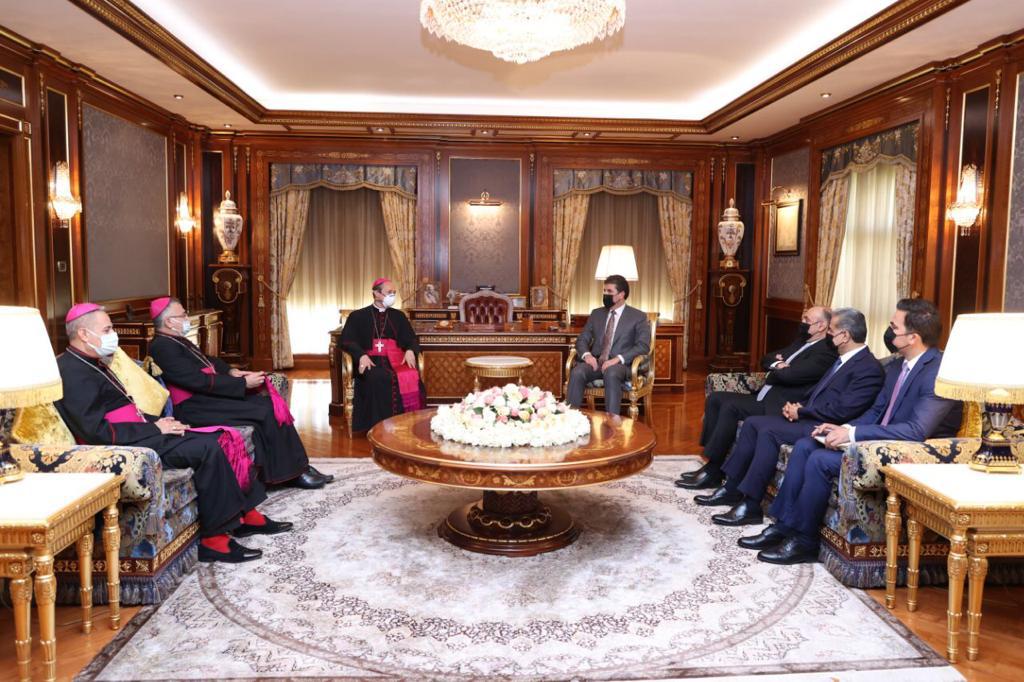 Shafaq News/ The President of Kurdistan, Nechirvan Barzani, received today, Wednesday, the Vatican's Ambassador to Iraq, Mitja Leskovar, who arrives in the region for the first time since he assumed his functions.

According to a readout of the meeting issued by the Region’s Presidency, President Barzani welcomed the Apostolic Nuncio, wishing him success in his duties.

President Barzani highly regards the relations with the Vatican, deeming the Pope's visit to Iraq and the Region as a "Historic Event".

Barzani hoped that the Pope's visit would spur the Christians who left their homeland to return.

The President appraised the inauguration of the Catholic University in Ankawa sub-district as a "positive and important step", stressing that Education is a cornerstone of the society.

"Special emphasis must be laid upon the quality of education and the culture of coexistence and tolerance. The universities must establish a vast network with the international universities to benefit from successful experiences, act as a bridge for relations, enhance coexistence, tolerance, and acceptance."

The Vatican's ambassador to Iraq expressed appreciation and gratitude for the Kurdistan Region for opening its gates to the displaced Christians, indicating that the Vatican greatly values those positions and the culture of coexistence, tolerance, and acceptance in the region.

The convoy of the holy see thanked President Barzani, the officials, and the people of Kurdistan for the warm welcome of the pope in the region.

President Barzani highlighted the vital role the Christians play in Iraq and Kurdistan, indicating that the Christian community played a remarkable role in serving, buildings, and developing the region.

The President explained that the Region's new constitution, which is currently being prepared, will preserve the Christians and other religious and ethnic communities.

The meeting touched upon the situation in Nineveh, the living conditions of the displaced people, vaccination rollouts, Baghdad-Erbil relations, the elections, among other topics of mutual interest.