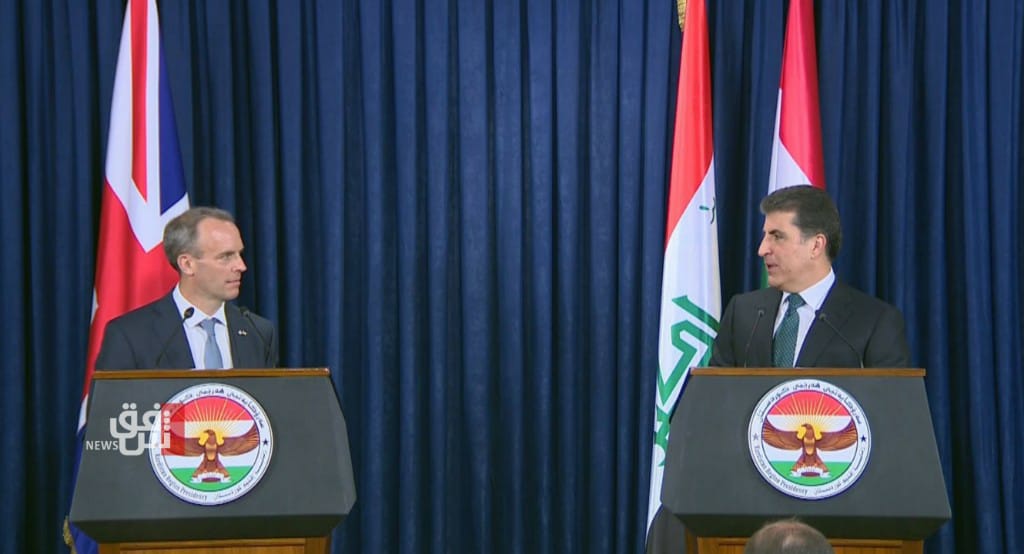 Shafaq News/ The President of Kurdistan, Nechirvan Barzani, reiterated his gratitude to the UK for pioneering the no-fly zone and safe haven over the Region in the early nineties of the past century, and highlighted the Region's commitment to the International resolutions on climate change.

President Barzani's statements came in a joint press conference held earlier today, Wednesday, with the UK's Minister of Foreign Affairs, Dominic Raab, in the capital of the Kurdistan Region, Erbil.

President Barzani said that his meeting with Minister Raab touched upon an array of issues, including the bilateral relations between the UK and Kurdistan, Baghdad-Erbil outstanding issues, the battle against ISIS, the political scene in the region, and other issues of mutual interest.

"Britain, along with other states, had a major role in establishing the safe haven in 1991," President Barzani said, "establishing this haven was a new beginning for the Kurdistan Region. Since then, our relations with Britain have continued until today in several fields, and it developed more during the war against ISIS organization."

"The Kurdistan Region and the entirety of Iraq have been affected by the spread of the Coronavirus that caused severe economic damages," he continued, "to lift the economy in the post-Coronavirus era, we need solidarity and cooperation."

He added, "We are currently suffering from the consequences of the drought and negative repercussions of ISIS war," stressing, "the Kurdistan Region is committed to the International resolutions related to environment and preserving it from climate change."

UK's Minister of Foreign Affairs said that his visit to Iraq and Kurdistan aims to cherish bilateral relations.

"We friends of the Kurdish nation... I believe we have historic relations, and we faced many challenges," he added, "I believe that the Region can withstand ISIS threats."

"We talked about the stability and security of Iraq and the Kurdistan Region. Britain will continue to fulfill its obligations towards Iraq."

Minister Raab said that his country had allocated financial assets to support the Peshmerga forces.

"We discussed with President Barzani the role of free media and freedom of expression. We also discussed education and climate change."

The UK Minister of Foreign Affairs extended an invitation to the Region's President to visit London, "we hope to see you soon there."

President Barzani to discuss the security situation with the Peshmerga leaders