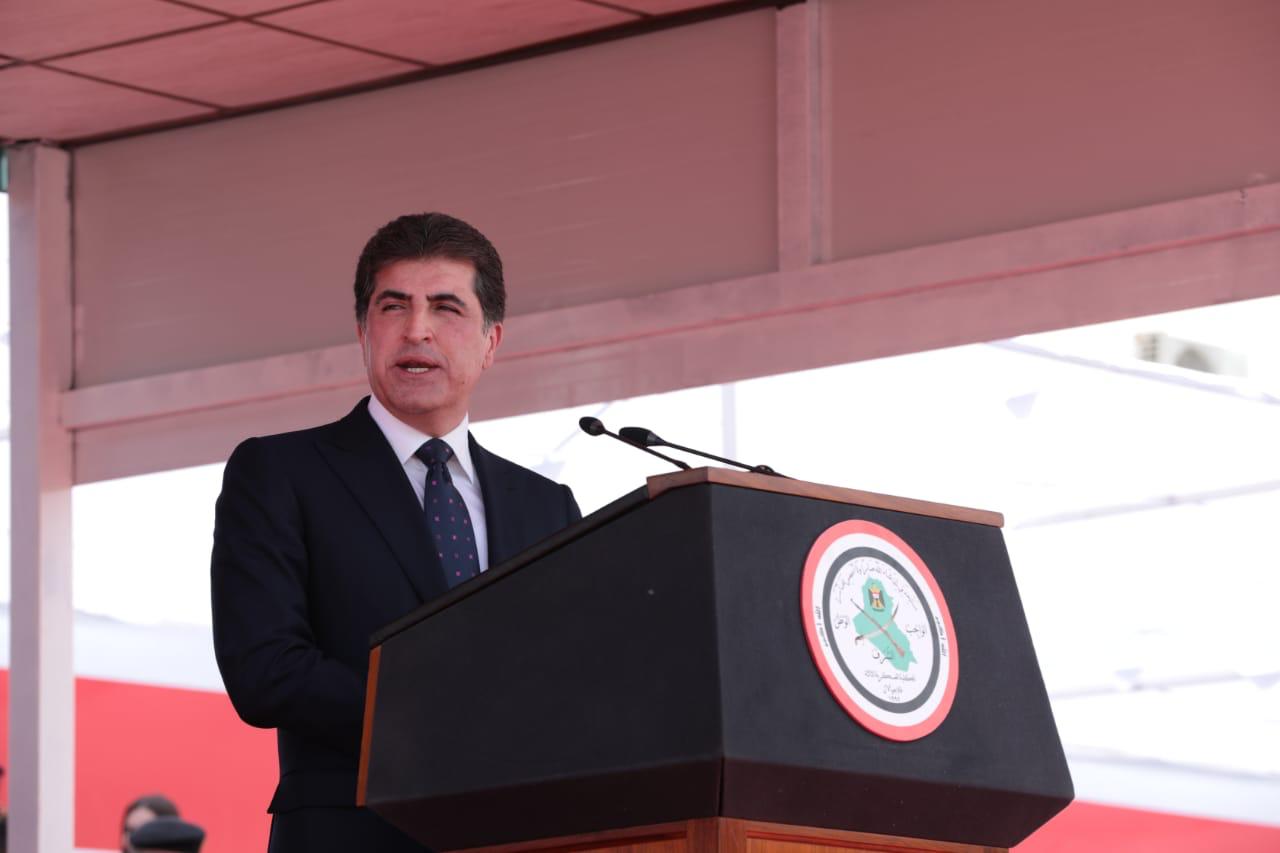 Shafaq News/ Kurdistan's President Nechirvan Barzani called on the Iraqi people across the spectrum to stand up to the "projects and threats outlaws are executing against the Kurdistan region".

Speaking before the 16th class of cadets graduating from the third Military School in Qallachollan, President Barzani said that the protection of Iraq is a "joint duty for the Iraqis", stressing that Federalism upholds Iraq and does not weaken it.

The President reiterated the calls for implementing the constitution of Iraq, safeguarding its borders and sovereignty, and fend off the external interference in its internal affairs.

"The Peshmerga forces will continue to pursue their training on the basis of this tenet," President Barzani continued.

"After the fall of the former regime, the security and stability of many Iraqi territories, including the capital Baghdad, was maintained by the Peshmerga forces," he added, "in the battle against ISIS, the Peshmerga was supportive of the Iraqi forces in protecting Kirkuk and Diyala and contributed to deterring ISIS groups along with the Iraqi forces."

The President called on the Iraqis to help deter the "projects and threats executed by outlawed groups against the Kurdistan region and its capital, Erbil."

"These deeds aim to sustain the complicated situation in Iraq and the violations of its sovereignty," he added.

"The security of Erbil and Kurdistan is a part of Iraq's security. We share sovereignty and interests. We also share failure and success."

The President called on the Commander-in-Chief of the Iraqi Forces, the Minister of Defense, and the Chief-of-Staff of the Iraqi Army to implement the constitution by "integrating the Peshmerga forces into the national defense system."

Barzani said that forming the joint "Army-Peshmerga" brigades might curb ISIS' frequent attacks against the Peshmerga forces, al-Hashd al-Shaabi (Popular Mobilization Forces-PMF), and the Iraqi army in the security gaps between the territories of the federal and regional governments.