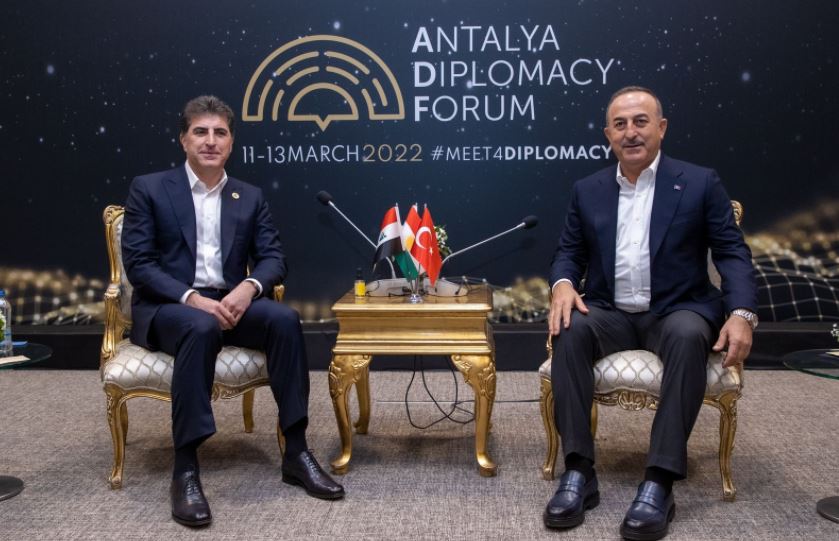 Shafaq News/ The President of the Kurdistan Region, Nechirvan Barzani, commended Turkey's role in alleviating the tension between Russia and Ukraine, hoping that diplomacy manages to bring closure to both countries.

President Barzani's remarks came during a meeting he held with the Turkish Minister of Foreign Affairs, Mevlut Cavusoglu, on the sidelines of the Antalya Diplomacy Forum earlier today, Saturday.

A readout issued by the region's presidency said that President Barzani and Minister Cavusoglu the situation in Iraq, the ties of Baghdad and Erbil with Ankara, and the latest updates on the ongoing war between Russia and Ukraine.

Turkey's top diplomat thanked the President for his participation in the forum's activities, expressing his country's heed to the ties with the Kurdistan Region and the political situation in Iraq.

President Barzani commended Turkey's endeavors to bring together Ukraine and Russia's Ministers of Foreign Affairs, hoping that peace and security prevail in the entire world by putting an end to the crisis.

Barzani expressed the region's willingness to pursue constitutional approaches to address the disputes with the federal government in Baghdad.

US Official to the Kurdish President: the United States gives priority to defeat ISIS