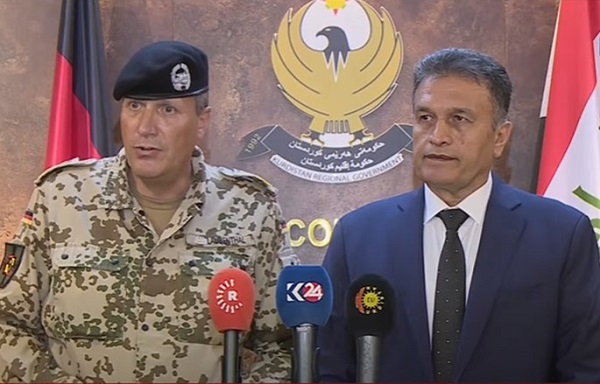 Shafaq News/ Germany is committed to supporting the armed forces of Iraq and the Kurdistan Region, with its parliament set to decide on its military’s mandate in Iraq in October, a deputy defense minister said on Thursday.

German Deputy Chief of Defense Lieutenant General Markus Laubenthal made the remark during a press conference at the Kurdistan Regional Government (KRG) Ministry of Peshmerga in Erbil, along with top Kurdish military commanders.

“I am very sure there will be continuous support of Germany to the whole region, Iraqi security forces, including the Peshmerga,” Laubenthal said of the upcoming Bundestag discussion on extending the German military’s advisory role in the country.

Germany is a member of the US-led coalition against ISIS and has assisted and trained Iraqi and Peshmerga forces since 2014.

Berlin will continue advising the Peshmerga forces’ reform program even as it supports Ukrainian forces fighting Russia’s invasion of their country, he added.

Supported by the coalition, the reform program aims to unify the different units of the Kurdish forces under a single command with a shared accounting unit.

According to Kurdish officials, some objectives of the ongoing program have been met, including the unification of Support Forces 1 and 2, which were previously outside the ministry’s command and control.

“I would like once again to express my respect for the efforts of Kurdistan Region in the fight against terrorism and the fight against Daesh (ISIS), which is a very harsh fight claimed many victims,” Lambrecht said during her visit to the German base.

From Zakho, German diplomat warns of "traffickers lies" about migration to Europe