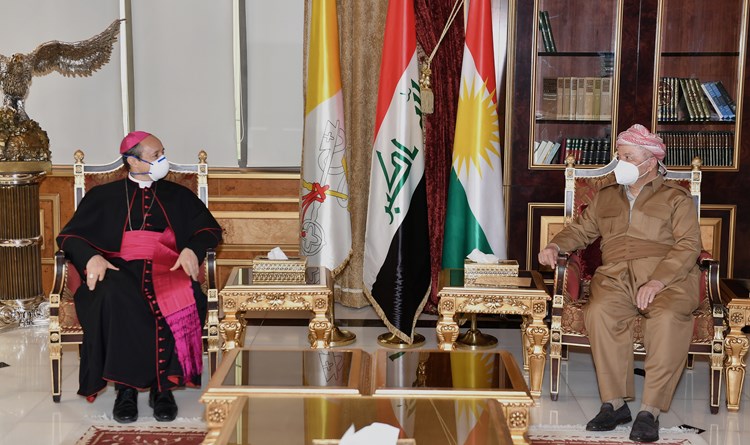 A readout of the meeting issued by Barzani's office said that the Apostolic Nuncio expressed gratitude to the Kurdistan Region and Barzani's endeavors for expanding the space of coexistence, tolerance between the religious and ethnic communities of Kurdistan Region, and supporting the Christians and other communities against ISIS threats.

The envoy of the Holy see highlighted the significance of the Pope's visit to Kurdistan, silver-lining the Pope and the Vatican's appreciation to the coexistence in the Region, stressing that this approach gives the Christians and other communities hope and confidence in the future.

The Kurdish leader said that the entire community of the Kurdistan Region, with all its components, welcomed the "Historic" visit of the Supreme Pontiff.

Barzani highlighted the roots of the culture of coexistence in Kurdistan, stressing that sectarianism and bigotry have no place in the region.

The Vatican ambassador conveyed the greetings of the Pope and thanked the President of the Kurdistan Regional Government for the success of his visit to the Kurdistan Region, protecting and hosting the Christians, and receiving the displaced, refugees, and all those who fled violence and oppression and sought safety in Kurdistan.

PM Barzani expressed his hope that the culture of tolerance and peaceful coexistence will flourish among the various Iraqi components.

The meeting touched upon the relation between the Kurdistan Region and the Federal Government, the 2021 Budget Law, the situation in the Nineveh Plain and the Kurdish territories outside the administration of the region, and the implementation of Article 140 of the constitution.