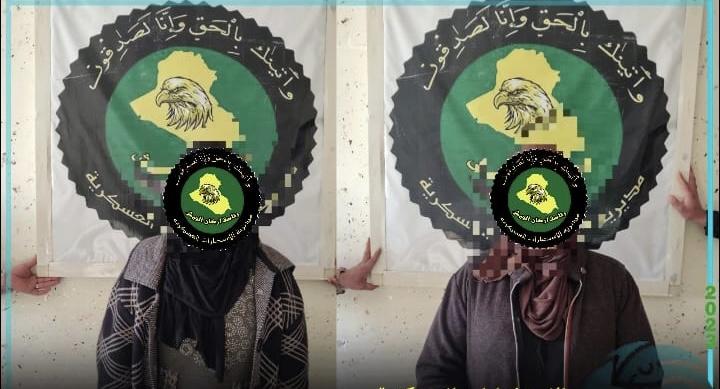 Shafaq News/ On Saturday, two terrorists were apprehended in Kirkuk Governorate and another was killed.

In a statement, the Iraqi Directorate of General Military Intelligence explained that two women affiliated with ISIS were arrested in an ambush in the Al-Zab district of Hawija.

The women are a part of a four-members terrorist network (the two others were arrested in a previous operation) and had worked for the so-called "Diwan al-Hisbah" in ISIS.

Meanwhile, the Federal Police killed a terrorist wearing an explosive belt while trying to enter the Al-Sharifiya village in the Riyadh district of Kirkuk.

It is worth mentioning that the terrorist organization's sleeper cells are very active in the governorates of Kirkuk, Saladin, and Diyala, known as "the Triangle of Death," due to the security vacuums.

The Triangle is home to over one million predominantly Sunni inhabitants (the ethnic majority in Iraq). The Euphrates River, which surrounds the Triangle to the southwest, is its most prominent geological formation. Numerous agricultural channels cut through the landscape. Many of these estates are tiny, and the landowners' families manage them—the proximity to the Euphrates River and water sources for agriculture results in high moisture content.

PMF: a fighter killed, two injured in the ISIS attack in Kirkuk